When Richard Vicek set out to document the life and times of Richard “Dick the Bruiser” Afflis, he knew it would take some time. The recently-released biography did take some time to put together — seven years in fact.

Vicek, a native of Palos Hills, Illinois, with degrees in history and communications from St. Joseph’s College, Rensselaer, Indiana, patiently plugged away at the project, which began in January 2009, and the end result is Bruiser: The World’s Most Dangerous Wrestler, from Crowbar Press.

His love of Bruiser goes back to 1966, when Vicek first went with his parents to the International Amphitheatre in Chicago and saw him perform. As Dick Afflis, he had been a successful football player before transitioning to pro wrestling in 1955. He was a major player in countless territories for years, had a renowned team with The Crusher (Reggie Lisowski), and promoted out of Indianapolis with his partner Wilbur Snyder. 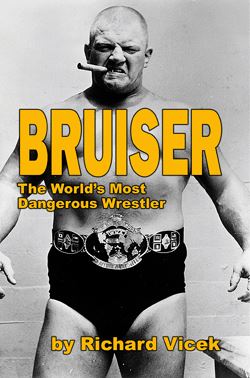 It was “a labor of love designed to recreate the life and times of this very special individual from the territorial old school wrestling era,” said Vicek in an email.

A lot of the time was spent in libraries, as Vicek and a few research associates visited libraries in all of the key cities where the Bruiser performed from the mid 1950s through the 1980s — Chicago, Indianapolis, Milwaukee, Fort Wayne, Detroit, St. Louis, New York, Los Angeles, and more.

Plus, there are some special collections out there too, the most important of which was the Margaret Afflis Johnston Collection — Bruiser’s mother, who was heavily involved in politics — at the Indiana State Library in Indianapolis, Indiana. Another gem in Indiana is the Jack Pfefer Collection at the University of Notre Dame in South Bend.

“For the record, the Bruiser’s widow sent me a notarized letter in 2010 informing me that she, her daughter, and her daughter’s husband were not interested in a compensated interview for this endeavor,” said Vicek, who has written a couple of profile stories for SLAM! Wrestling in the past. “However, over 250 other people who personally knew the Bruiser from cradle to grave were interviewed or corresponded with for this project.”

Dick the Bruiser would have been 86 years old at the time of publication, had he not passed away while lifting weights in November 1991. While working on the book, 37 people who Vicek had interviewed died.

Just who did Vicek seek out? “Classmates from grammar school, high school, and college; football teammates from the Jefferson High School Broncos, Purdue University Boilermakers, University of Nevada Wolf Pack, and the Green Bay Packers; and countless associates from his professional wrestling career, including wrestlers, managers, promoters, broadcaster, journalists, fans, and others. Many of these classmates generously provided scrapbooks, photos, autograph pages, mementos, and memorabilia of their youth.”

As with most Crowbar Press publications, Bruiser: The World’s Most Dangerous Wrestler is full of wonderful photos, clippings and memorabilia from the Golden Age of professional wrestling. “Die-hard wrestling fans know about this, but I think the non-wrestling fan will be fascinated by Bruiser’s story,” Vicek told the Lafayette Journal & Courier. “I’m not going to say he was the Babe Ruth or Jackie Robinson of pro wrestling, but he was so unique. He was able to project violence in the ring. He projected believability. After seeing him, people would think these matches must be real.”

Vicek, who works for an independent government agency by day, shared the Introduction for Bruiser: The World’s Most Dangerous Wrestler with SLAM! Wrestling readers:

Our story is based on the grand entertainment spectacle known as professional wrestling. Professional wrestling debuted on network television on the defunct DuMont network from Chicago in 1949. Colorful early performers such as Gorgeous George, Lou Thesz, Verne Gagne, Argentina Rocca, Buddy Rogers, Killer Kowalski, Gypsy Joe, and Yukon Eric captured the imagination of the American public. In the 1950s, people may have been exposed to professional wrestling because their grandmother was screaming at the small figures on a small black-and-white TV set. Or they may have become aware of professional wrestling in the ‘60s and ‘70s when it was telecast in various timeslots on the newly introduced UHF TV frequency (although, usually not during prime time). Later, professional wrestling heightened TV exposure on the new phenomenon of cable TV beginning in the late 1970s on Atlanta’s WTBS-TV, and WOR-TV out of Secaucus, New Jersey.

By 1985, the professional wrestling business in North America witnessed several ups and downs in business cycles. Many of the territorial promoters organized themselves under the banner of “Pro Wrestling USA” to fend off the largest and most rapidly growing of all the territories — The World Wrestling Federation (WWF), now known as World Wrestling Entertainment (WWE). The WWF was led by its controlling owner, chief executive, and principal broadcast personality, Vincent Kennedy McMahon. For many years, McMahon confined his operations to the northeastern seaboard of the United States. However, in late 1983, he embarked on his first successful attempt at a coast-to-coast professional wrestling promotion. He hired star talent from other territories, most notably Hulk Hogan, Randy (Macho Man) Savage, Bobby (The Brain) Heenan, Paul (Mr. Wonderful) Orndorff, The Junkyard Dog, “Rowdy” Roddy Piper and countless other personalities. The WWF purchased time slots on television stations once controlled by the other wrestling promoters and began showing a nationally syndicated wrestling program that appealed to fans from coast-to-coast. The WWF staged wrestling events in many of the same venues and arenas the local territorial promoters previously rented.

In response to the WWF momentum, the newly formed “Pro Wrestling USA” members staged Super Clash I on September 28, 1985, at Chicago’s Comiskey Park. Ten of the matches on the card entailed championship wrestling titles associated with the various territories. In the eighth match of the night, a 56-year-old veteran workhorse of a wrestler, Dick the Bruiser, was a participant in the NWA six-man tag team title match. He teamed with Crusher and Baron Von Raschke to challenge the champions, Ivan Koloff, Nikita Koloff and Krusher Khruschev.Bruiser’s real name was William Franklin Afflis. He became a full-time professional wrestler in January 1955 — some 30 years earlier. During his years in the squared circle, Bruiser headlined professional wrestling events in New York, Boston, Chicago, Detroit, St. Louis, Indianapolis, Cincinnati, Los Angeles, Milwaukee, Atlanta, and many other cities (including Japan), and held many singles and tag team titles during his illustrious career. He also co-owned successful wrestling promotions, beginning in the mid-1960s in Chicago and Indianapolis, which enabled him to serve both as the producer and the leading performer in the show. This made him one of the higher-paid individuals in the professional wrestling business.

However, on that cool autumn night in 1985, things had changed considerably.

Bruiser no longer was the big draw and top performer he had been from the ‘50s through the early ‘70s. He and his regular tag team partners were not in the main event that night, and there were five higher-profile bouts scheduled after their match. His team didn’t hold the title, either, and they ultimately lost the title challenge. Taking all that into account, he didn’t receive a large share of the talent payoffs since most of which went to the main-event wrestlers.

There was a new generation of wrestling superstars at SuperClash I that night, namely Ric Flair, Stan Hansen, Magnum T.A., Rick Martell, Stan Hansen, The Road Warriors, Sgt. Slaughter, and the Fabulous Freebirds. While there were respectable cheers when Bruiser was introduced to the 20,347 fans in attendance (reported as 25,000), it was a far cry from the thunderous hysteria and passion of prior decades. Longtime fans and observers of Dick the Bruiser realized the proverbial show was over and his best days were memories.Bruiser was no longer an owner of a meaningful territorial promotion, either, as his limited promotional activities were usually confined to small-town fairs or high-school gyms. That night in 1985 would be Dick the Bruiser’s final appearance as a professional wrestler on a significant wrestling card. The last hurrah would be at the same old ballpark where Bruiser had once been one of the headline attractions.

Those are just a few of the subjects we will explore in the pages that follow.