Collecting wrestling memorabilia can be tricky. What starts out as a few packs of wrestling cards can morph into a room filled with thousands of dollars’ worth of figures packing your shelves. While I don’t have a robust collection, I have picked up a few items over the last 32 years that have filled me with joy and, at times, has caused my wife to cringe.

In fact, my wife was a key player in my latest wrestling find. We were celebrating our 14th wedding anniversary and decided to go to the Smokin Buddha in Port Colborne, Ontario, for a celebratory lunch. While munching on a wonderful meal, my wife suggested that we go and look at the nearby small shops that line the shore of Lake Erie. To her delight I agreed and here is where I made my grand find. 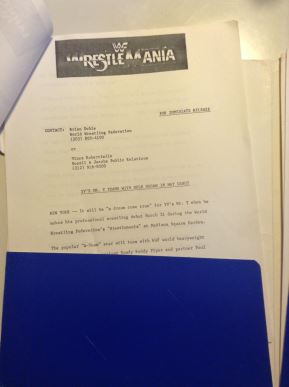 I must admit that I am not much of a shopper. Aimlessly wandering through stores and examining antiques really bores me. While my wife and the owner of the antique store were expostulating on the virtues of some old table and chairs I wandered to the back of the establishment. Just beyond a stack of rustic furniture I spied a cabinet filled with ancient magazines. I reached in and pulled out a stack of magazines. Perhaps I would find some old school reading to pass the time until I could leave? To my surprise “Dr. D” David Shultz and his blond mane stared back at me from the cover of issue 111 of a 1984 WWF house show program from the Hartford Civic Center. Wow! That was cool! Still, this is not the prize.

I flipped to the next magazine which was issue 115, from 1984 where Cyndi Lauper and Wendi Richter adorned the cover for the fans at the Boston Garden. What a fun item, but not the main event. After shuffling the rock ‘n’ wrestling stars to the bottom of the pile I spied the Holy Grail. It was a blue folder that sported a red WWF logo.

Intrigued, I opened it to find it filled with documents. The right flap had the addresses of the WWF’s offices in South Yarmouth, MA, and Tokyo, Japan. There were also papers in the flaps of the folder. They were clearly press releases for the first WrestleMania build up. The one set of stapled papers provided a brief history of the WWF. Interestingly it discussed the WWF’s expansion.

“The regional factionalism that has always divided professional wrestling made it strong in each market, but prevented the type of growth Vince Jr. has achieved,” stated the press release. “Through the use of national syndicated television and its current three USA cable programs, the WWF has created nationally televised wrestling.”

It also gave a history of the WWF championship from Buddy Rogers to Hulk Hogan. Further, it detailed the main attractions on the card and the celebrity involvement. In fact Mr. T is quoted as saying, “I’m into wrestling and I see myself as a successful wrestler.” I laughed and laughed at that one. Hogan went on to say that he and Mr. T were “learning from each other — he’s teaching me street tactics and I’m teaching him ring tactics.” I laughed a bit more.

Another package of papers detailed the personalities involved in the card such as Roddy Piper, Paul Orndorff, Wendi Richter, Mr. T and Hulk Hogan. It described Hulk Hogan as having had “a successful amateur bodybuilding stint that produced his 24 inch biceps.” Chuckle. Piper’s workout program was revealed in an article: “He stays in shape with constant wrestling and exercise but finds time to pursue his hobby of caring for the numerous dogs and horses on his farm.”

It was also stated that Richter had a previous career as a “quarter horse barrel racer and bronc rider on the West Texas rodeo circuit.”

Having looked online I have found similar packages but they were in either white or a black folder. My guess is that this package I found would have been sent out to the press in the build-up to the first WrestleMania; maybe the difference colour indicated that it went to Canadian media — who knows? It is probably missing some photos as well.

My wife did not share the same enthusiasm that I did for my prize. What a great find this was! I will forever agree to go antique shopping with my wife especially if it yields this kind of a result!

Caleb has a small but fun collection of wrestling goodies including the poster of the first event he ever went to in 1988 featuring the stars of the AWA.