Scott Teal loves this quote — with good reason — and pastes it at the end of his emails. It’s from Jim Ross at this year’s George Tragos/Lou Thesz Hall of Fame induction ceremony, where Teal was honored. “I want to congratulate Scott Teal. I’ve enjoyed a great deal of his work. I read a lot of books and for anyone to spend that much time with Ole Anderson, you have to compare it to chemotherapy; it is a fate beyond belief. You are probably the strongest, bravest man in this room, and that includes the Dandies — Dan Hodge and Dan Gable. God bless you, sir.” 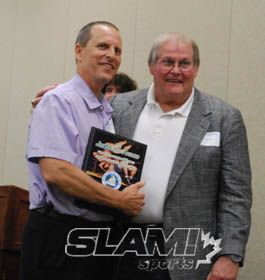 Scott Teal, left, with the Jim Melby Award for his contributions to professional wrestling journalism, and his presenter Bob Roop, at the George Tragos/Lou Thesz Professional Wrestling Hall of Fame induction ceremony in July 2011 in Waterloo, Iowa. Photo by Joyce Paustian.

It speaks volumes to the patience and strength of my friend, Scott Teal.

And, while I may not have the eloquence or humor of J.R., I too want to praise Scott Teal.

I recently finished reading Atlas: Too Much… Too Soon, which Teal wrote with Tony Atlas, and it got me thinking about how poor this wrestling world of ours would be without Scott.

The books that Teal did with JJ Dillon (along with Phil Varriale) and Ole Anderson stand among the most important and well-received in wrestling history, as both offer fascinating, behind-the-scenes looks at the inner-workings of the business by men who were bookers and influential power brokers as well as professional wrestlers.

The other books he has put out might be a step below, but not much. Ivan Koloff played his cards a little to close to his chest, I thought, while Joe Hamilton’s book Assassin: The Man Behind the Mask suffered a touch in a way that’s hard to describe, perhaps like the difference between wrestling with and without a mask — it’s the same job, but you have to make it a little different.

But back to Atlas. His book is really great and revealing in ways that too many of the other autobiographies aren’t. Atlas shares his triumphs and failures, his vices and obsessions, and takes the blame on himself for any shortcomings.

Though he did have a recent WWE run as a manager for Mark Henry, there’s no way that WWE Books would have taken a chance on his manuscript. Rather than see Atlas’ story untold, Teal jumped at the opportunity to work with him and publish it through his Crowbar Press line, a vanity press that still does things the right way in an era of insta-books by any Tom, Dick or Harry.

While I haven’t read the Stan Hansen or Bill DeMott books Teal did, I know I will; ditto the Nikita Koloff book he is working on now, with Bill Murdock (who did the Jack Brisco book) designed to replace the disappointing Breaking the Chains Christian-faith book Koloff put out in 2000.

Teal has also taken a chance on a few other books that he didn’t have a hand in, like getting the rights to out-of-print books like 1937’s Fall Guys by Marcus Griffin, which was groundbreaking in its revelations about pro wrestling, and Jim Freedman’s Drawing Heat, which is about southern Ontario in the early 1980s, The Sheik and “Bearman” Dave McKigney, and still stands as my absolute favourite wrestling book of all time. Emerson Murray’s book, Bruiser Brody, is an awesome testament to someone’s hard work and dedication.

As for the third edition of Lou Thesz’s autobiography, Hooker, originally written with Kit Bauman, it is a must-have for any wrestling fan. “And it should come as no surprise to those familiar with Scott Teal’s work that it is lovingly hand-crafted, and the product of countless hours, days and months of nurturing, as are all his projects,” wrote historian J Michael Kenyon, who helped proofread and fact check the book.

“There would have been a lot of wrestlers forgotten if it wasn’t for that book that he used to put out, Whatever Happened To …?” Atlas told me in December. “Even these books he’s writing now, people like Ole Anderson and JJ Dillon, if you’re not on a WWE video, nobody even knows you exist. Wrestling is a dead art. The days of professional wrestling is over. It’s been over since the ’90s. What you’ve got now are, you’ve got sports entertainers. They’re not the same guys.”

And they don’t tell the same stories.

As interesting as it may seem to the readers, I can honestly attest that talking to Wade Barrett or John Cena is not as much fun as chatting with Pat Patterson, Colonel DeBeers or Dominic Denucci. Perhaps, in another 10 years, outside of the confines of the WWE publicity machine, those guys might be able to share their true thoughts — or maybe they won’t. I’ve often compared it to the pro athletes of today, who have been schooled from an early age on how to deal with the media compared to the guys who ground it out on the roads in the ’50s and ’60s; there’s no comparison when they each start going with the stories, though they play the same sport.

Teal comes by his passion for wrestling honestly. In the 1960s, he first got exposed to pro wrestling, and, in 1969 when he discovered Championship Wrestling from Florida, he was hooked. Every other Tuesday night he would head to Tampa’s Fort Hester Armory and the Sportatorium for TV tapings, and he found himself writing up the Tampa Scene newsletter, which later became Florida Fanfare. Soon, he was sending stories and photos to the magazines.

Moving to Tennessee for school, Teal stayed away from wrestling for about a year, and then was drawn back in. Nashville promoter Nick Gulas asked him to work for him, doing publicity with the Slam-O-Gram program, and being a veritable jack-of-all-trades at the shows. About 1982, Teal got out of the business, but the business never left him.

A decade later, Teal heard that a few of his old wrestling friends were asking whatever happened to him, which led to many conversations about “whatever happened to…” Teal began producing an insider newsletter about the old timers, helping them stay in touch with each other and giving updates and interviews, passing on word of sickness and death. The Whatever Happened To … ? newsletters, which ran from 1993 to 2004, but are still available through the website, are vital pieces of wrestling history. Kenyon calls them “the most delicious, memory-tickling mat stuff ever assembled under one imprint.”

He’s also produced shoot interviews on DVD, often much more complex and well-researched than anything from the “mainstream” shoot video producers.

The experience and connections would grow, and today, Teal is one of the most knowledgeable and sought-after historians in wrestling, and a deserving recipient of the James C. Melby Award by both the Cauliflower Alley Club (in 2008) and the Tragos/Thesz Hall of Fame (in 2011) for his contributions to professional wrestling journalism.

But more importantly, he hasn’t changed. He still drives a truck overnight for UPS, he’s still a dedicated husband to Angela, father to his kids, grandfather to his grandkids.

And he’s still a friend, and someone I can count on.

“I never wanted to be a wrestler, I never had a desire to be a manager or a referee. All I wanted to do was learn about the history of the wrestling business. I spent time in the libraries. I started in 1968. I used to do fan club newsletters, bulletins. That was my drive, and I want to keep doing that as long as I can,” Teal said in Iowa this summer when accepting his award.

Let’s hope he keeps doing it for a long time still to come. We are all richer because of his work.