New peeks into the McMahon empire

Two recently-published books offer compelling behind-the-scenes looks at the way the McMahon family runs the WWE, and a couple of others should provide further interesting reading when they are printed.

Already on the shelves are Vince Russo’s Forgiven: One Man’s Journey from Self-Glorification to Sanctification (ECW Press) and “Wrestlers Are Like Seagulls” From McMahon to McMahon by JJ Dillon (Crowbar Press). Both Russo and Dillon rose to powerful spots in the Titan Towers in Stanford, Connecticut — Russo as lead TV writer and Dillon as a vice-president. 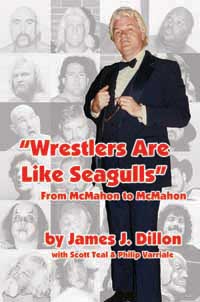 The pictures they paint of working alongside Mr. Vincent K. McMahon are not pretty; but they are respectful.

“Vince is a fascinating individual,” Dillon wrote. “He is driven and has no life or interests outside of wrestling.”

“Vince and I grew really close,” Russo wrote. “At times, he almost felt like a father to me. I care so much about him, his family and his business — maybe as much as I cared about my own flesh and blood.”

Both Russo and Dillon found themselves helping to write television.

“When I worked for Vince, I had no other life. Ninety percent of the creative ideas were formulated at Vince’s house on the weekends. In the summer months, Vince, [Pat] Patterson, and I would work outdoors on the patio by his pool. In the winter months, we would work in his formal dining room. We would have open discussions and throw ideas out for consideration.””You can read all you want about creative teams and booking committees, but during the time I was writing with Vince those were fictitious terms,” wrote Russo. “There was no ‘team’ and there was no ‘committee.’ It was Vince and I — period. … That usually consisted of a 10-hour day — just Vince and I sitting at his dining room table. I think this is where we complemented each other so well. I would hit Vince with the ‘big picture,’ and he would fine-tune it.”

The peek into the production of a weekly show is truly unique in the wrestling book world, and the difference between the tasks assigned to Dillon and Russo are as different as, well, WWF Superstars to Monday Night Raw. The role of television in the WWE empire changed during the timespan they worked for the company.

To Russo and Dillon, Mr. McMahon keeps an inhuman schedule. “Vince is a workaholic. He thinks about the business 24/7,” wrote Dillon. “Yes, he sleeps, but I think he dreams about the business even then.” Sick employees were expected to come in to work, and vacations were frowned upon.

The other members of the McMahon family are tackled as well:

As well, both Russo and Dillon share details of the corporate culture at Titan Towers, dishing out some juicy gossip (with some names changed), and telling some funny stories. Since both were primarily based in Stanford, little is written about WWE house shows.

In the annals of wrestling books about the McMahons, mention has to be made of 2002’s Sex, Lies, and Headlocks: The Real Story of Vince McMahon and the World Wrestling Federation (Crown Publishers). Written by Shaun Assael of ESPN: The Magazine and veteran wrestling journalist Mike Mooneyham of the Charleston, S.C. Post and Courier, it’s a terrific collection of the ups and downs of the McMahons, especially the steroid trial, the sexual harassment charges, television deals and the initial stock offering. But what it never had was what makes Russo and Dillon’s books so intriguing — the look behind the scenes into the empire.

The Bill Watts stay in Titan Tower was a short one, but no doubt he covers it in his autobiography, The Cowboy and the Cross. The bio, co-authored with Scott Williams, is at the printer now and scheduled for a January release.

The most unpredictable is World Wrestling Insanity: The Decline and Fall of a Family Empire by James Guttman (ECW Press, $19.95 US), set for a May 2006 release. 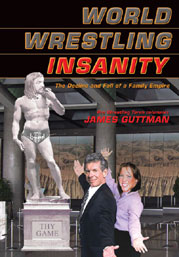 Guttman runs worldwrestlinginsanity.com, and, according to the advance press material for the book, will use “sarcasm, humour, and hard facts to break down the secrets of Vince McMahon’s company and analyze the reasoning behind many of its creative and business decision. Never before have WWE, the McMahon family, Triple H, and others been held up to the light and examined so closely.”

Besides Watts, Russo and Dillon, there are a few others who worked in a wrestling capacity with the McMahons since the expansion of the 1980s that could also tell some interesting tales:

A couple of others — Jim Barnett, Terry Garvin, Gorilla Monsoon — who might have written interesting takes on the McMahon empire have already passed on. At some point, the market will reach McMahon oversaturation. It just doesn’t appear to be today.