The second edition of BRISCO: The Life and Times of National Collegiate and World Heavyweight Wrestling Champion Jack Brisco had its genesis at Jack’s funeral. 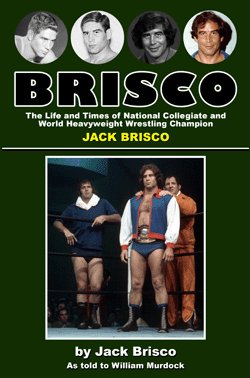 His biographer, William Murdock, was talking to Jim Ross at the funeral, and the book came up. Originally published in February 2004, by Mike Chapman’s Culture House Books, Brisco, though a celebrated part of the history of wrestling books, was hard to find.

“We all believe there was still market for the book being that we wanted to read a chapter with Jack passing away, as well as a lot of things that didn’t make the first book, or [we] didn’t learn until after the first book was printed,” said Murdock.

Scott Teal, of Crowbar Press, stepped in to republish — and update — the book.

“It amazed me that the autobiography of one of the most iconic figures in pro wrestling history wasn’t available from Mike Chapman or Amazon.com,” said Teal. “To me, it was important that his story be made available to anyone interested in wrestling history. I thought it would be good to update the book and add more photos, many which have never been seen by anyone other than fans who bought programs in Florida during the ’60s and ’70s.”Before Murdock and Teal started the project though, they sought and received the blessings of Jack’s widow, Jan, and brother, Jerry Brisco.

A former “stooge” and backstage power in the WWE, and now a talent scout, Jerry Brisco is thrilled that his sibling’s autobiography is easy to get again.

“I don’t think it’s your prototype, typical wrestling book,” said Jerry Brisco. “It’s a book about a person, and that’s what I enjoy about it. I’ve read some of the books by the oldtimers, and they’re always the smartest, the best, the brightest there was, and everybody else was three or four rungs below them. Jack was never that type.”

If anyone had any right to brag about their accomplishments, it was Jack Brisco. From humble beginnings, he went on to become an NCAA wrestling champion at Oklahoma State, into pro wrestling, where he was one of the greatest, holding the NWA World Heavyweight wrestling championship on two occasions from 1973-75.

Added to the book is a foreword by journalist/historian Mike Mooneyham and an afterword by Adam “Edge” Copeland.

“I like that it’s brought up to date with Adam Copeland, somebody that’s kind of new school with his opinion on Jack, and what he thought of Jack,” said Jerry. “Adam was living in Tampa for a while, and they have these lunches down here with a bunch of oldtimers. Adam came along one time and was sitting at the table. He and Jack sat together and Jack got to know him and really appreciate him. Jack gained a tremendous amount of respect for him.”

There are now more than 200 photos in the book, many from the collections of Chuck Thornton, Dick Steinborn, Jerry Prater, and Scott Teal.

One in particular wowed Jerry; it was taken by Dick Steinborn, and showed Louie Tillet making Jack Brisco bleed.

“I was thumbing through the book, and I don’t know if it was fate or destiny, or whatever you want to call it, but it stopped on a page where Jack had a bloody face. That’s the only time that I’ve ever, ever seen that picture,” said Jerry. “From what I can remember, Eddie Graham told Dickie to destroy the picture and never wanted it to surface again. If you’ve ever been around him, you know Steinborn’s not one to follow orders too well. I was absolutely shocked. My first question was, ‘How in the hell did you get that picture?’

“That’s worth the price of the book, because that’s something that’s never been seen before.”

With his brother’s book back in print, what about a book from Jerry Brisco?

“I’ve been asked a million times, and I just feel I have no story at this time,” he concluded. “After reading Jack’s story, how do you top that? He was just a spectacular athlete. The thing that comes out in the book the most, that I’m the most proud of, is what kind of person Jack was, how much he was respected by everybody who ever came across him.”