Eric Bischoff may be one of the most misunderstood people in wrestling. Many fans within the internet community, and even online wrestling pundits and reporters, are quick to blame him for anything and everything that they don’t like, often based on misinformation, partial information, or even no information at all. To help clear things up, SLAM! Wrestling sat down with Bischoff at the Fan Expo Canada in Toronto, where he accompanied Hulk Hogan who is holding a series of autograph signings and photo sessions all weekend.

Most recently, some of the internet wrestling community (IWC) have griped about the number of changes to TNA’s roster – some popular stars are no longer with the company, while other non-wrestling names from the world of mixed martial arts have been brought in. A kneejerk reaction of many of the IWC is to blame Bischoff. It may surprise them, then, to hear that Bischoff had nothing to do with those changes. 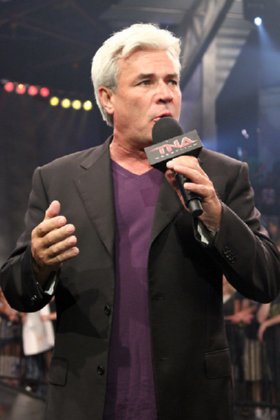 “My role doesn’t extend to the hiring and firing or recruiting,” he clarified. “That’s the business side of TNA’s business, and I’m not involved in that.”

“My partner Jason Hervey and I are the Executive Producers of Impact. Essentially, my role is: to oversee the creative side of the production; to be involved in post-production as is necessary; to execute the creative direction and vision of each episode; to work closely with the network to make sure the TNA side of the equation understands the network’s goals; and to the liaison for TNA on the production side of things so that the network understands what our challenges are, and where we’re going, and what we’re trying to do. My involvement is really limited to the show itself. I’m not involved in many aspects of the business that the internet would suggest I’m involved in.”

While Bischoff doesn’t completely eschew the internet – he did after all agree to this interview – what he seems to mind is the way things are presented as being fact when that’s simply not the case.

“Unfortunately, the internet – the dirt sheets, the blogs, whatever you want to call them – a lot of them are operating with partial information. And that hurts a lot of the different parties involved. It hurts the talent in certain respects; it hurts the business in certain respects; it hurts the credibility of the people who write about things that they don’t fully understand. It’s unfortunate,” he said. “but that’s the nature of the business.”

Some might argue that he could simply cave in to the demand of the IWC, ‘open up the kimono’ and provide these sites with all of the information in order to clear up the speculation. But that’s not a realistic option, and Bischoff is quick to demonstrate why.

“(That’s like asking if) I feel that I owe the fans confidential information about the inside workings of the company,” he said, re-framing the question more practically. “Absolutely not. I don’t have the right or the ability to discuss personal information. Nor should I, nor should anybody else for that matter. Some things are just confidential. They may involve details of some other peoples’ investments, or could involve someone’s career. Not everything is suitable for public consumption.”

“As someone who is very clearly associated with and very much invested in it emotionally,” he said, “I want to see it succeed, obviously. I think the business, and the television business, is an extremely competitive one. It’s a very difficult one for a lot of people and for a lot of networks – we’re competing with general entertainment, we’re competing for extremely valuable real estate on a very important television network that’s owned by a very important media conglomerate.”

“But I think there is a ton of potential in TNA. It’s uniquely positioned to grow, and to become much larger in many ways than it is right now.”

He’s also happy to talk about his son, Garett, who is now an active member of the TNA roster.

“I’m extremely proud of him,” he said, warmly. “I’m very, very proud. It was a goal of his, something that he’d wanted to do since he was extremely young, as a child growing up – which I didn’t really find out about until just a few years ago when he broke into the business. I’m very proud of him for working hard to do what he’s needed to do. Clearly he (had) an advantage in getting into the business, I think everybody understands that, and I’d be lying if I said I didn’t think that was a factor. But he also has had to overcome a lot because of who he is, and because of who I am. And he’s handled that really well. But there’s a part of me that knows – and I tell him this – that this is an extremely difficult business, more difficult now than it’s ever been. There’s really only one big place to work, and TNA is what TNA is and where they are. It’s a tough career choice when there are really only two car manufacturers and one’s in mass production.”

Which is not intended to be a knock on TNA, though some IWC members will naturally jump to that conclusion. In fact, his involvement with TNA has brought Bischoff some more recent business success beyond simply the TV aspect of the business.

“Jason and I together own a significant portion of a gaming company that creates and produces digital or online casino style games that are distributed around the world,” he explained. “Mainly in Europe but some in Canada. Our latest project is a TNA branded digital slot machine that’s being played, as we speak, on the larger networks in Europe. Just yesterday we got initial feedback that the game debuted – just about a month ago – at number two in its category. It’s charting really well, and all signs indicate that it’s going to be a great success. And we’re proud of that because it’s a new product, it’s a new model, and nobody else has done it.”

That phrase – nobody else has done it – can be applied even more so to his Bischoff’s career in the wrestling industry. Like him or loathe him, one has to admire his success in the business. Few have the knowledge and experience that he brings to the table, and fewer still have the longevity and track record. And, more importantly, a happy life.

“I’m feeling great,” he confirmed. “ I’ve got a couple of bucks in the bank, my family is happy and healthy, and there are a lot of business opportunities on my table now and will be more in the future. So I guess all is good.”

And even though some IWC members may still want to brand him as a villain, Bischoff describes his brand – or more appropriately, his brands – as follows:

Hulk Hogan and Eric Bischoff will be appearing at Fan Expo Canada at the Metro Toronto Convention Centre on Saturday and Sunday, with various autograph sessions and photo ops. Check out FanExpoCanada.com for schedule information.