Drawing Heat, which celebrates the Ontario wrestling scene of the early 1980s, is a book that has stayed in people’s memory, says its author Jim Freedman. First published in 1988, it has just been re-released in a new, improved version from Crowbar Press. 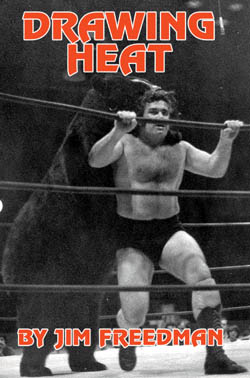 “I think it evoked what wrestling was all about, at some crucial period of time. And everybody that is my age, or maybe a little bit younger, or certainly older, remembers that as the golden age of wrestling. Its roots are there, I think. That what I had always figured,” Freedman told SLAM! Wrestling.

An anthropology and economics professor from the University of Western Ontario in London, Freedman found himself in a totally unknown world. On one hand, he was kayfabed by the Tunneys and given the runaround by the established powers; on the other, he was invited into the fascinating world of Dave “Bearman” McKigney, leading to friendships with characters as diverse as The Sheik and The Wolfman.

The outsider’s perspective is the key to Drawing Heat, he thinks. “In the sense of George Plimpton writing about football,” Freedman said. “It did definitely catch on, and of course, [famed Canadian radio host] Peter Gzowski used to plug it every day. … Gzowski considered it one of his Top 10 books of his life…. He loved bears, he loved bears. But he was a wrestling fan, but only because it was Ontario culture.”

Freedman has since had a dozen books published, about a wide variety of subjects, as well as a novel. He has worked as a consultant overseas, such as on a irrigation remodeling scheme in northern Pakistan, and with the United Nations, where his background allows him to analyze rural economies in order to figuring out the causes of conflict in locations like Afghanistan, Sudan, Congo, and Mozambique.

Still, it’s Drawing Heat that he keeps hearing about.

“It’s probably the best of them, to tell you the truth,” he said. “They call frequently and I hear from people frequently. It’s very gratifying.”He’s immensely proud of the book, and looks back on the time period when he was writing it and when it was published very fondly.

“I spent a lot of time writing it, so it was well-written. Maybe that has a role? Who knows.”

Drawing Heat has been a tough book to find for many years, with copies selling on websites for over $100. Scott Teal is the man behind Crowbar Press, which has also published autobiographies of Ole Anderson, JJ Dillon, Ivan Koloff, Downtown Bruno and more.

There were a few wrestling books that were out of print that I felt needed to be re-released due to their importance,” said Teal. “Drawing Heat was the one that first came to mind, so I thought it would be interesting to contact Jim Freedman, the author, to see if he would be interested. He was wholeheartedly behind the project. I also wanted to interview Jim to get his take on the process of writing the book, what kind of a reaction the book received (from both fans and wrestlers), and his reaction to the death of Dave McKigney.”

In addition to the original text, and a boatload of new photos, this reprinting features two additions: