The last time The Sheik was in the national wrestling spotlight was back in 2007 when he was inducted into the WWE Hall of Fame.

But now, the late Sheik’s legacy on the city of Detroit will be shown in great detail in an upcoming two-disc DVD documentary from Independent News Service, entitled The Sheik. 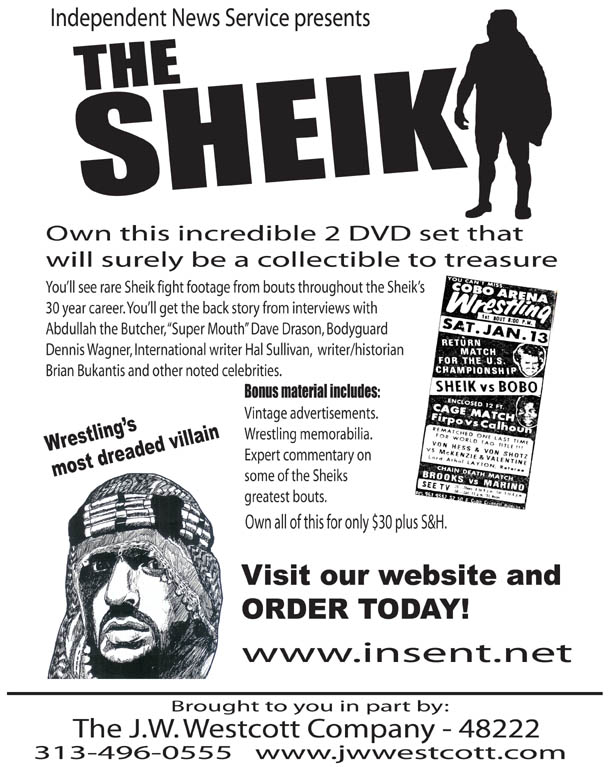 According to “Supermouth” Dave Drason, the Sheik’s former manager, photographer, and writer of the Body Press program during his Detroit days, this DVD will be an instant collector’s item and a steal for the $30 price tag.

“Award-winning producer Mark Nowotarski deserves all the credit here,” Drason said. “He found it disturbing that there was no book, DVD, or any other form of media honoring the greatest villain that professional wrestling has ever witnessed. If you ever listen to the various radio shows being produced around the country that feature wrestling as its topic of conversation, at some time or another, The Sheik’s name always comes up, and every wrestler being questioned is more than happy to relate one of many stories they have about him.

“The Sheik is the main subject of old school wrestling fans to this day. They can’t get enough of him. And they will get a double dose of things never seen before that will give them their Sheik fix for quite a long time.”

Gearing up for an April release date, The Sheik will have an exclusive Detroit viewing party before being shown at the Main Art Theatre in Royal Oak, Mich., with a Q & A session to follow with Drason and others. This one-day screening will have only 200 commemorative tickets available, so this much-anticipated event will likely sell out quickly.

“When Mark asked me to come on board, I was more than happy to help,” Drason said. “His interviews that he did with me brought back some great memories, many of which I hadn’t thought about in years. It was fun digging through my archives for stuff that will be used in the project, some of which I hadn’t seen in maybe 40 years – pictures, programs, clippings, magazines, even a bloody foreign object that I found in the pants pocket of my old ring gear. I also unearthed one of his complete outfits he gave to me many years ago that he last wore at the Coliseum show in L.A. back in the 70’s, blood-stained and all.

“Any project on The Sheik is something that has been long overdue. I can’t wait to see the finished product. I anticipate that this will be the most sought-after wrestling DVD of the 21st century.”

For more information on the Sheik documentary, visit www.insent.net or Nowotarski’s YouTube channel.