If you took a poll at this years WrestleReunion at who people wanted to see the most, two names consistently came up — The Great Muta and Jushin “Thunder” Lyger. The two Japanese icons wrestled during the weekend as well as signed autographs and photos for ecstatic fans.

Fans not only from California but around the world flocked to WrestleReunion. Some attended from his home country and others from the east coast. As one eastern fan was overheard saying, “You don’t get the chance to see Lyger wrestle or meet him, that is why I am here.”

It is something not lost on the legend. 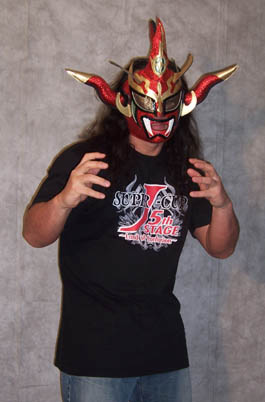 “I am very happy to be here because the fans have given a big welcome,” he told SLAM! Wrestling in an exclusive interview.

It is rare that Lyger is interviewed in America. His limited English combined with the interviewers lack of Japanese makes it difficult. However thanks to some positive words from Dr. Mike Lano, and with the translation assistance from his Japanese photographer Hashizume lead to a short interview prior to his Pro Wrestling Guerrilla match on January 29th.

The match, against Canadian El Generico, was a classic. You could tell from the way Generico burst through the curtains that he was ecstatic to get to wrestle Lyger. His influence and style was the precursor to the light-heavyweight/X Division style of today and his influence on many wrestlers of the past 20 years is undeniable.

“Every time I come to the States, I make a very big impression. Every time I enjoy the pleasure of being on a United States wrestling tour,” Lyger said.

The fan reaction in America and Japan are very different as well. The 1,000+ fans in attendance at the LAX Hilton ballroom roared with appreciation, the polar opposite to the polite Japanese crowds.

“When American fans are a big crowd I fight better and better. I like Japanese fans, they have a style and American fans have their own style. I love them both.”

Lyger’s career has been intertwined with Calgary wrestlers. His classic matches against the likes of Brian Pillman, Owen Hart, Chris Benoit, and Tyson Kidd are still talked about today. When I mentioned I am from Calgary, Lyger got very excited.

“When I was a green boy, I wrestled in Calgary against Brian Pillman, Owen Hart and others. I love Calgary and the Calgary wrestling style and loved going to Calgary for the wrestling.”

He maintained the Japanese politeness when asked for a favorite match against an American wrestler.

“I respect the top American wrestlers and love all of the top boys.”

At 45 years old, Lyger has done it all. He has broken political boundaries, wrestled around the world, and become a true legend. While other wrestlers mingled and wandered the hotel, Lyger was in the basement gym working out in preparation for Friday evening’s match with Austin Aries. He still keeps motivated every day to wrestle, something you shouldn’t expect him to retire from anytime soon.

Jason Clevett is still in a bit of disbelief that he not only saw Jushin Liger wrestle live, but took ringside photos of the match, met Lyger, and conducted an interview. Thanks to Dr. Mike Lano for making the introduction and special thanks to Hashizume for his translation, making this interview possible.