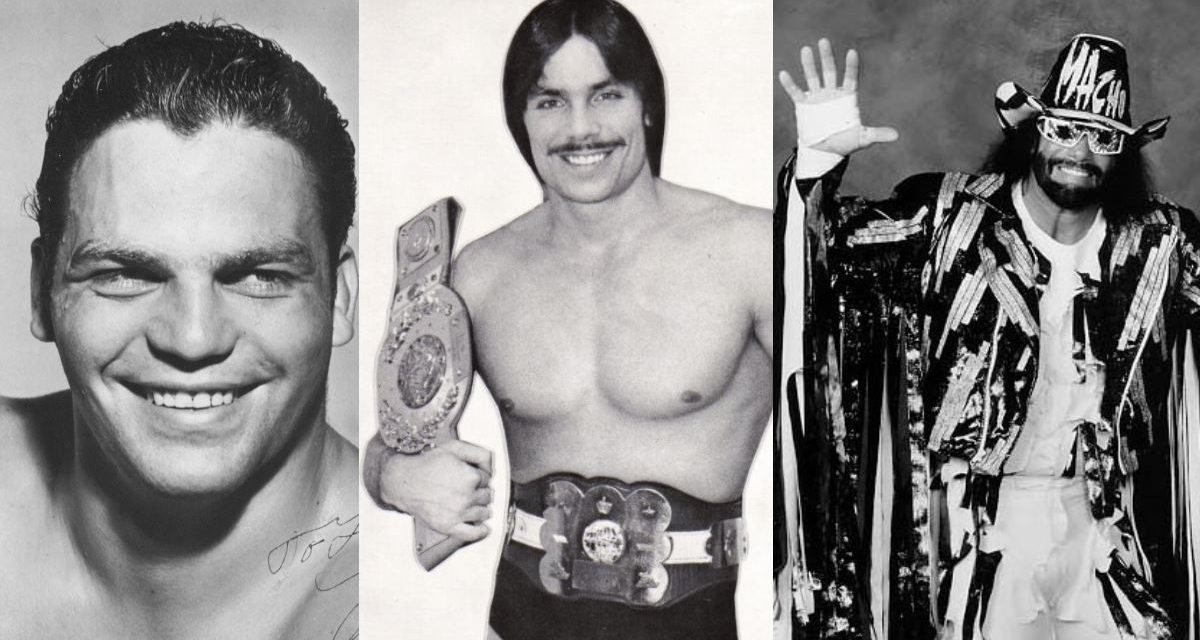 Angelo Poffo, who died this morning at the age of 84 in Sarasota, Florida, needs to be remembered as far more than just the father of Randy “Macho Man” Savage and “Leaping” Lanny Poffo. He served his country in the Navy, set a world’s record for sit-ups, was one of the greatest heel wrestlers of his era, promoted against the establish wrestling hierarchy, and, was one of the most notoriously frugal wrestlers in history.

After all, at one point, he was a manager named “The Miser.” 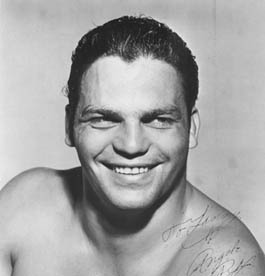 Poffo thought that baseball was going to be his ticket to success. He played his way onto the DePaul University baseball team as a catcher. “My catching was good, and everything, but my hitting was bad. So I had to give it up,” recalled Angelo in 2005. At DePaul, Poffo studied physical education and played competitive chess. Before being hit by a baseball and getting plate-shy, Poffo played ball with George Mikan, who would later become the first big NBA star. DePaul is also where he met his wife of more than 50 years, Judy Sverdlin.

Born April 10, 1925 in Downers Grove, Illinois, Poffo started wrestling at Karl Pojello’s gym in Chicago’s south side, directed there by classmate and amateur wrestler Carl Engstrom. “It wasn’t a fantastic gym or anything, but Ruffy Silverstein was there,” he said. Silverstein, from the University of Illinois, would be Angelo’s first opponent, in 1949 in Beloit, Wisconsin. Poffo put in time locally, wrestling in small-time “smokers” and doing occasional shows for Chicago promoter Fred Kohler at the Marigold Arena.

Like most beginners, it took a while to find his groove. He patterned his work after Professor Roy Shire, and first turned heel in Columbus, Ohio in 1950, working many times with Frankie Talaber.

A good bump-man, Poffo was proud of his hit-and-run style in the ring, saying fans “don’t like a coward.” He wouldn’t even get cheers from fellow Italians in the crowd. Once he was paired up with valet/manager Bronco Lubich, the fans’ ire doubled. “I go out there to wrestle, and the guy was dumping me all over the place like Wilbur Snyder, who was a great worker and a nice guy. Then at the end of the match, Bronco would pull his leg and I’d beat him and I created a riot. It’s that simple,” said Poffo.

“He was one of the first people that had a manager, and he knew how to use his manager, Bronco Lubich,” said his son, Lanny. “What they would do, they would give the babyface a lot of the match, then Bronco would do one little thing at the end and cause a victory for my dad. … My dad’s idea was to make the babyface look as good as he could.”

One newspaper promotional story from 1956 talked about the duo before a bout with Hans Schmidt:

“Poffo is always accompanied to the ringside by his manager-adviser Bronco Lubich, who appears in a tuxedo and carrying a cane. He coaches his protege from a ringside location. Lubich was once a wrestler and a rough one and for that reason he urges Poffo to become as unruly as his opponent when the occasion calls for it.

“Poffo has created an Italian neckbreaker hold that is devastating and if clamped on properly can be a grueling grip to the opponent. In fact if Poffo’s hold is used on Hans and the latter does not concede the fall in short order, Schmidt will be in danger of being hospitalized.”

Poffo described his finishing hold: “It was a front facelock, then I turned them around, jumped up in the air and drop them. Both of us would go down, but I’d cover.” He won the Chicago version of the U.S. title in 1958, losing it to Wilbur Snyder in Detroit, where the belt stayed around the waist of The Sheik for decades.

In Indianapolis in 1966, Poffo was paired with Chris Markoff as The Devil’s Duo, and were managed by Bobby Heenan. In 1973, he formed a regular team with Ken Dillinger, known as The Graduates.

Falling back on his education at DePaul, Poffo eased out of pro wrestling, working as a phys ed teacher in Chicago. (Yes, he did teach wrestling, but not eye-poking.) “I was just getting older. I saved all my money and I was happy with the money I got,” he recalled. “Then I started teaching school in Chicago, physical education.”

The family stayed together throughout Poffo’s career, said Judy Poffo. “Travelling all over and all that kind of stuff, every couple of months moving. Like our boys say, they enjoyed every bit of it. They went to foreign countries, they met many people. I probably, if I had not travelled with Ang, would never have been out of the state of Illinois.”

Lanny Poffo, the future “Genius,” knew he was going to be a wrestler.

“When your father’s a wrestler, you just don’t know any other way. … I was the youngest in the family, so I didn’t know it was different. Then as I grew up, I realized it was a little strange, what he did. But I thought it was very appealing,” he said. I was encouraged to try every sport. I would have liked to have been a baseball player, but unfortunately, they cut the team.

It was hard when Dad was a bad guy. “Of course, the kids are going to say anything, but I just let it go in one ear and out the other. Randy would always be the type of guy to start a fight over it. I would be the kind that would walk away. Even now in my personal life, I’ve never been in a fight. … If people don’t like what my father does for a living, at least he’s got a living; it’s better than being a welfare recipient.”

When his sons were old enough to wrestle, Poffo bought into the Atlantic Grand Prix Wrestling promotion in the Canadian Maritimes with Emile Dupre in the mid-’70s, and then ran Championship Wrestling out of Lexington, Kentucky from 1979 to 1983.

With his last match in 1991, battling Luis Martinez, Poffo did get to team with his sons on numerous occasions, as well as watching Lanny Poffo battle the evil Randy Savage in the family’s promotions. “It was good for them, but they earned it the hard way. Lanny was a good acrobat and Randy was a real good, hard worker.” Now retired to Florida, Poffo, like any father, he is pleased with the success of his sons. “That was great. I was very happy about it. And they kept their money like I did, so we’re all fine.”

There are pluses and minuses to Poffo’s notoriously attention to the dollar.

Kathy Lupsity, the oldest daughter of the late Bronco Lubich, is thankful for Poffo’s wise ways with the finances too. “When they’d go on to the next city, they’d like to get there really early, to relax, read the paper, eat. … sometimes they’d catch a movie. But the biggest thing that he and Angelo used to do is to go down to the Merryl Lynch office, any close Merryl Lynch office, to talk to the guys about investment.”

Poffo had strong self-control, said Seymour Koenig in an interview with Whatever Happened To… “He wanted to save $100 a week plus. He had that discipline. Myself … I wasn’t worried about that. I wanted to go places and see things.”

When Poffo was the owner of the International Championship Wrestling promotion, minority partner Bob Roop said that he was even more extreme and tight with the dollar.

Promoting was not the most prudent move, said Poffo. “That wasn’t very good. It’s better to be a wrestler. Promoters die broke. If you don’t draw, you lose money.”

For the last number of years, Poffo was not in good health. His last major appearances were with WCW when Randy Savage was one of its top stars. Poffo was inducted into the WCW Hall of Fame.

He made a few appearances in WCW in 1995 and was inducted into the WCW Hall of Fame.

On his website, Lanny Poffo wrote a poem as a tribute to his father:

And Robert Ripley’s feature
Celebrated this event
Giving credence to “SUCCESS
IS NOT AN ACCIDENT!”

That’s always been his motto
Through times both good and bad
He’s a REAL Hall of Famer
And the World’s Greatest Dad!

– with files from Steven Johnson