Simply put, there isn’t any other wrestling book out there like the new Ole Anderson autobiography, Inside Out: How Corporate America Destroyed Professional Wrestling. It’s the first book to cover all the bases in one binding, from wrestling to booking to promoting to the million-dollar corporations that battled for TV ratings in the last decade. 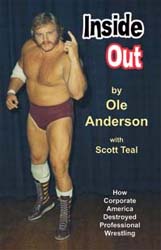 Yet, I came away from it with a dazed, hit-over-the-head feel when I finished reading.

Anderson is not a subtle man. He would rather speak forthrightly and hurt someone’s feelings than beat around the bush to preserve any sense of another’s self-worth. He was like that in the two-and-a-half hour interview I recently did with him, and he’s the same in this book.

He goes back to the same points obsessively, belittling anyone who disagrees or proposes a different viewpoint: He was really tough; he was in wrestling only to make money; all the other bookers were terrible, only he knew what he was doing; The Suits brought down WCW. At one point, he even writes, “I’ve said this several times before and you might be getting tired of it, but it bears repeating.”

Besides repetitive, the other buzzwords to describe Inside Out: How Corporate America Destroyed Professional Wrestling would be “bitter” and “insightful.”

To say Anderson is bitter about the way things turned out, especially the end of his career with WCW, would be an understatement. But this is the kicker: he’s bitter with TREMENDOUS insight into the business and everything we love about it.

In partnership with Scott Teal, the man behind the great Whatever Happened To… newsletters, Anderson has truly crafted a must-read book that leaves the reader both in awe of finally seeing behind the curtain, but beaten down from the experience.

The first part of Inside Out: How Corporate America Destroyed Professional Wrestling talks about his start in pro wrestling, training with Verne Gagne and his early days in the business: how he was drawn into the Minnesota Wrecking Crew, teaming with Gene & Lars Anderson, then how he and Gene formed such a solid unit that they stayed together forever. Teal has collected a wonderful assortment of photos in the self-published book, enhancing the narrative but never overwhelming it.

Anderson then takes the reader behind-the-scenes into the world of the booker, especially in Georgia and Charlotte, the two territories he helmed. Promoters Jim Barnett and Jim Crockett Sr. are brought to vivid life, and one understands far better the complexities of the job after reading it. He talks about what went into decisions, like putting one wrestler over another, and how the office was run and the towns were promoted.

But when Anderson’s saga gets to the sale of Georgia Championship Wrestling to Vince McMahon (turns out it wasn’t as abrupt as many thought), and the subsequent rise of the WWF and WCW, his distaste for the way wrestling evolved becomes all too apparent, at the expense of the colourful stories and wisdom he shared in the early part of the tome. In short, the subhead, How Corporate America Destroyed Professional Wrestling, only applies to the last half of the book.There’s a lot that has obviously been toned down or cut out too. We don’t get anything about Anderson’s family life, his workouts, or very many tales from the road. The fond recollections of fun times with colleagues are few and far between, but stories where Anderson comes out on top abound, whether it’s belittling wrestlers in his employ, or telling a story to illustrate how his way was the only way.

Having talked about it with Anderson myself, he understood that his customary profanity-laced diatribes could never have made it into a mainstream book. Fine. But other potentially controversial issues seem purposely ignored. For example, at no point is Jim Barnett’s homosexual lifestyle ever mentioned; if you were working for him and that was part of who he was, doesn’t that merit some sort of acknowledgment? Fans want to know the story behind Barnett and various stars, especially given Jim Wilson’s recent revelations in his own book, Chokehold.

Yet some of Anderson’s absurdly self-aggrandizing statements are left in (though somewhat muted by Teal, I would guess) for the reader to stumble over and wonder “What planet is he from?” Take this whopper: “WCW management was never able to understand that there are a thousand Randy Savages in the world. There are a thousand Ric Flairs out there. Well, maybe not a thousand, but I could have found a few who might have been even better.”

Well, there must be almost a thousand wrestling books out there by now, but despite the flaws, Ole Anderson’s Inside Out: How Corporate America Destroyed Professional Wrestling stands as one of the solid main eventers. It may be missing the glitz or media push of a WWE book, but it offers substance until now never provided.