MONTERREY, Mexico – How far would you travel to pursue your chosen vocation? For Winnipeg, Manitoba native Sarah Stock, the desire to be a full-time professional wrestler leads to Monterrey, Mexico.

“I love Monterrey. It’s a really vibrant city,” Stock said in an exclusive interview with SLAM! Wrestling. “It is a big move, but for me, it was a necessary move. There was no question I was going to do it. I figured what I gained from it would outweigh the risks.” 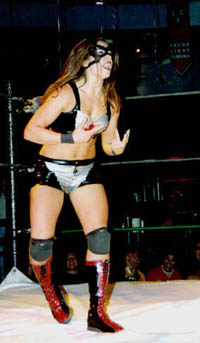 A two-year veteran of the wrestling scene, Stock was open about the fact that she is not a long-time fan of wrestling. “I had a boyfriend from several years ago who use to force me to sit down with him and watch it. I actually developed an aversion for wrestling,” she explained.

However, the raven-haired athlete did have a hunger for contact sports, specifically indulging in kickboxing. “I had been kickboxing competitively for two years, but I wasn’t getting as many fights as I wanted,” Stock said. “I needed something else to do to keep me busy.”

It was only when she sought out training to become a professional wrestler did she discover a passion for the squared circle. “After I started training, I realized how fun it was and what an art form it is. I really got into it.”

In December of 2001, Stock began to train with Winnipeg based Top Rope Championship (TRCW) Wrestling, instructed by Canadian veteran grappler Eddie Watts. Not long after, she made her professional debut. “It was only five weeks after I started training that Can-Am wrestling needed another girl for their tour, even though I had just started training,” she recalled.

On February 22, 2002, Stock entered the ring for her first match in the Northwest Territories. From there, she traversed various independent promotions, all the while with a key focus on wanting to wrestle overseas. “Pretty much as soon as I started one of my main objectives was to get really good and work in Japan,” said Stock.

In aspiring to acquire competent ring skills, Stock made the decision that Mexico would be the right environment to further her career. “I knew a lot of the Mexican girls had worked in Japan so I figured this would be the way to getting a step closer to that goal,” said Stock. “Eddie Watts was down here wrestling and I expressed an interest in coming. I worked all summer, saved up some money, and told him I was planning on coming down to Mexico.”

With bus ticket in hand, Stock boldly set out from Canada and arrived in Nuevo Laredo, Mexico on September 29 of this year. Meeting up with her mentor Watts, followed by introductions to area promoters, she eventually began to acquire bookings. In time, she would settle in Monterrey.

Before her departure from Nuevo Laredo however, she acquired a new masked wrestling persona for Mexico, which had its roots in Canada. “I had worn a mask, for presentation only, in Canada, along with a pair of wings under the name of Griffin. I would take off the mask before the match.”

With pictures in tow of her in the outfit, a promoter in Mexico suggested she keep the mask on. With some modifications, Stock eventually settled on a Zorro-like mask and assumed her new identity, Dark Angel. “It was Eddie Watts idea for the name and the Mexican promoter liked the idea.”

Living on her own, Stock has quickly adapted to living a simple lifestyle in Mexico. “I rent out a room from this family that runs a complex,” described Stock. “There’s a couple of toilets outside and a shower outside as well. It’s pretty basic; no kitchen or anything so I eat out quite a bit.”

Along with the changes in accommodations, she also had to contend with the language barrier. “It’s still coming,” confessed Stock in her attempts to become fluent in Spanish. “It’s not that hard once you develop that relationship with some people where you kind of invent your own version of Spanish so you can converse and understand others.”

But the biggest challenge of all awaited Stock in the ring where she would soon find herself going toe to toe with luchadoras and the unique lucha wrestling style. “It took me a little while to get used to it,” Stock reflected. “The first couple of matches were the hardest because of the language barrier. There was a lot of walking through the different moves. My first match was kind of like being thrown to the wolves.”

With perseverance, Stock stuck it out, crediting her female Mexican counterparts for helping her to adapt. “All the girls here are really nice and willing to help. They’re more than willing to get in the ring with me and train.”

The move to Mexico has placed Stock in the envious position of wrestling full-time in the lucha libre scene, working for various promotions, including earning a spot on the all women’s Lucha Libre Femenil promotion, where she currently holds the LLF juvenil (junior) championship.

“It’s been great. I manage to stay very busy working up to five days a week. There’s seven different promoters that I’m working for right now,” she said. “It (wrestling) is a major part of Mexican life. That was something I always wanted to do; wrestle and not have to worry about going to another job. It’s great not having to go to a nine-to-five job.”

Only adding to Stock’s love of wrestling is the support she has received from her family back in Winnipeg, who fully support her ventures in Mexico. “They love it. Both my mom and dad are really proud of me. In Winnipeg, when I have shows, they come out and support me. They’re my biggest fans.”