Atlas blames no one but himself in autobiography

Tony Atlas, freshly relieved of his duties in World Wrestling Entertainment, now has time to push his book, Atlas: Too Much… Too Soon. There was a lot of soul-searching that went into the deeply personal autobiography.

“It was kind of like my confession. I feel so much better. I got it all off my chest. There are no more secrets,” Atlas recently confessed during a recent long, wide-ranging conversation.

“There’s an old saying in the entertainment business: Once a book’s been read, it’s old. That’s the reason that I’ve written my book. I talk about several things, not just rasslin’. My personal life is in there.”

And is it ever.

Like in his book, Atlas is not shy about talking about taboo subjects.

Naturally, for a young African-American from Virginia who came of age in Roanoke, Virginia, and started training to be professional wrestler after high school, racism is one subject he confronts. According to Atlas, simply by being African-American, he is able to address the issues in his own community that a Caucasian couldn’t.

Atlas talks about sex — and estimates he slept with 2,000 women. But if he had his way, his foot fetish would have more of a focus.”If I had the choice between right now today, going to the ring, Madison Square Garden on a pay-per-view, or being at WrestleMania in a main event against the WWE champion, and going to a hotel and getting walked on by a girl, what do you think I’d do? I’d go get walked on. That’s how weak people are when they say fetish,” he said. “It was a lot easier for me to get sex than to get walked on. When you talk about getting laid, it’s normal and everybody’s all for it. But when you ask a girl to walk on you, she kind of sits back and looks at you like you’re weird or something.”

Getting involved with drugs, especially cocaine, in 1981, only intensified his urges. “Now the only thing I was thinking about was partying. And the only reason I was wrestling at that time was to get money so I could go party. This went on from 1981 to almost 1983.”

Writing the book with co-author Scott Teal made Atlas look at himself intensely, and he came away with someone to blame.

“I had a lot of problems in the wrestling business, primarily created by me,” he said. “My success in life I owe to thousands of people; my failures, I owe to one, and I have to look at that one person in the mirror every day when I shave. I don’t blame Vince McMahon or anybody else for the foolish mistakes that I made in life — I made them myself. I wanted to write about them to let people know that the only way to move on, and the only way to change and start something else, is you have to admit that you are the cause. Because as long as you can blame somebody else for your problems, you’re going to continue to have problems.”

Teal had interviewed Atlas for his Whatever Happened to… publication, and knew his story would be good. “It wasn’t so much about wrestling as it was a rags-to-riches-to-rags story, and that appealed to me,” said Teal. “Back before we began working on the book, when I did the interview, I was amazed that Tony took such a personal responsibility for his downfall, and at the same time, gave credit to people like Ole Anderson and George Scott for making him the star he was. He gave others the credit and took all the blame on himself, which is unusual for most of the guys who tell their stories. The bad things that happened to a wrestler are usually the fault of someone else.” 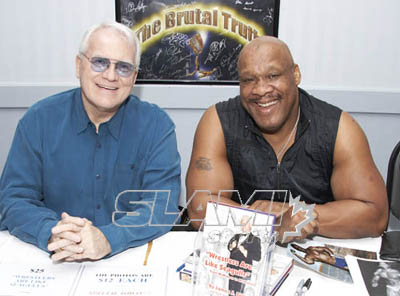 Atlas’ start in pro wrestling has been distorted over the years to play up his “Mr. U.S.A.” credentials. The truth is that he worked as a dishwasher while in high school in Roanoke. While working out at the YMCA, Blackjack Mulligan came in. His buddy pointed the hulking wrestler out. Atlas didn’t know who Blackjack was, since his family didn’t have a television.

On another occasion, Sandy Scott saw Atlas at the same gym, and asked him about becoming a pro wrestler. “He said, ‘When you finish high school, we’d like to make you into a pro,'” Atlas recalled. When he was old enough, Klondike Bill picked him up drove him to Charlotte, where Atlas started training. He had gone from making $60 a week, to $150 a week plus a room at the YMCA and gym membership. “I was the first and only wrestler who was paid to learn to be a wrestler.”

It was a fast initiation, debuting less than a year into his training. Atlas soon learned that wrestlers lived in a world outside of the mainstream, with its own set of rules.

“In my day, rasslin’ was like being incarcerated. You spent 20 years and you are completely separated from the general public. You live in this world of fantasy. 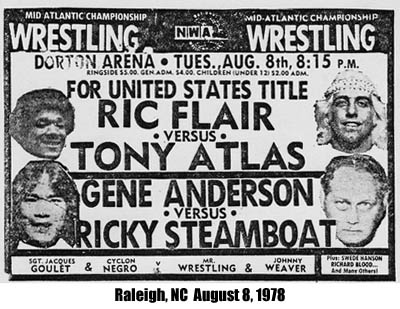 “We were treated like kings. That’s what made it even harder for the guys to save money,” he explained. “When I first started, Johnny Weaver said, ‘Tony, you’ve got two choices. You can live like a king, or you can become a millionaire.’ I was lucky to say that I did both. I saved over a million dollars at a point in my career and I lived like a king, and I lived as a homeless person. I have lived life in America from every perspective.”

Atlas’ recent resurgence can be traced, in part, back to 2006, when he was inducted into the WWE’s Hall of Fame. After the ceremony, he worked off and on for WWE in various capacities on a part-time basis, before being hired full-time to be Mark Henry’s personal trainer; the role as Henry’s manager was actually an afterthought. From 2008 to earlier this year, Atlas was showcased to a whole new audience who hadn’t seen him as a star in the 1970s and 1980s, or as the goofy Saba Simba in the 1990s.

His notoriety has helped sales, Teal said. “For the past several years, book sales have been really slow. Tony’s book, for whatever reason, has done better than any of my books since Ivan Koloff’s Is That Wrestling Fake? Even though the book has only been out a few months, Atlas is on track to sell more copies than any of my other books other than the bios of Ole Anderson and JJ Dillon, and in a much shorter amount of time.”

While Teal looks after the online sales for the self-published venture through his Crowbar Press imprint, Atlas, who lives in Maine with wife Monika, is on the road.

“What I’ve been doing is going to a lot of autograph signings, different events, selling the book,” Atlas said, adding that he’s still in great shape. With his 21-inch arms, and still able to bench press over 400 pounds, Atlas is completely open to working in the ring more.

“I’m back on the independent circuit right now. I’m doing a little bit of personal training,” he said. “I’m in transition, because who knows what the first of the year is going to bring?”