What a year it has been in pro wrestling.

Sure, at first glance, this year wasn’t much different than those that recently passed, but when you get right down to it, the world inside the squared circle was loaded with stories that changed its landscape one more time. Between new headliners coming in and older ones leaving, this was one of the most unique years we’ve seen in quite a while.

As has become a tradition in our virtual office, some of the SLAM! Wrestling crew got together to pick the top stories of the year. This year’s voting panel of Bob Kapur, Andy McNamara and Jon Waldman were able to narrow down our story list to 11 that stood above all others. Here now are the top stories in pro wrestling for 2010. 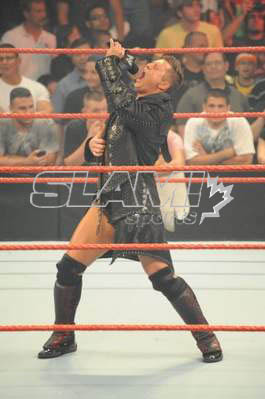 He’s The Miz and he was awesome in 2010. Photo by Mike Mastrandrea

1 – The ascension of The Miz
One of the most unlikely and inspirational stories out there, kind of like an evil Rudy. Miz has overcome legitimate harassing, backstage politics and was not taken seriously by anyone. He worked his butt off, developed a terrific heel persona, ran with the Money In The Bank briefcase angle and has finally obtained world gold. The question now will be if he is given a chance to go on a proper championship run. – Andy

2 – TNA’s Monday night experiment bombs
Wrestling pundits across the ‘Net tend to enjoy playing wise-ass when it comes to TNA’s exploits, but even the most die-hard fan of the Orlando-based league were shouting expletives when news rolled out that the Monday Night Wars were resuming. Yes, Impact moved to Monday nights and to the surprise of no one, the show barely registered on the wrestling radar. Though the pilot episode on January 4th did well, the rest of the run was forgettable and it wasn’t long before TNA retreated back to Thursdays. Of course, this was just the tip of the iceberg in a less than banner year for TNA. – Jon

3- NXT and Nexus introduce new stars
When WWE first introduced NXT — its new developmental program — we didn’t quite know what to expect. The shows themselves ranged from mildly entertaining to downright horrible (see Season 3), but the concept did prove to be a good platform to launch a new breed of superstars, namely Wade Barrett and Daniel Bryan. – Jon

4 – Shawn Michaels retires
I’m very surprised HBK hasn’t resurfaced yet as his loss to Undertaker at WrestleMania marks one of the longest retirements in recent wrestling history. An amazing storyline, incredible match, and classy exit makes this a truly memorable 2010 moment. Something tells me that we’ll see Michaels back in 2011. – Andy

5 – End of the chair shot to the head
For years, we wondered when enough would truly be enough in pro wrestling and dangerous chair shots to the skull would be done. Recent research pointed to the dangers associated with the head shots. By year’s end, both WWE and TNA had abolished them, the latter finally saying enough is enough after a particularly nasty cut suffered by Ken Anderson. – Jon

6 – We remember
It’s a sad part of our jobs at SLAM! to report on more wrestling deaths, year after year. The year 2010 was particularly tough, as some of wrestling’s all-time greats, including Edouard Carpentier, Gene Kiniski and Jack Brisco. Tragically, the wrestling world also lost several wrestlers long before their time, including Luna Vachon, Chris Kanyon and Lance Cade. – Jon

7 – The return of Bret Hart to WWE
I know Jon and Bob didn’t rank this one too highly, but I thought it was a huge deal… for old school fans. Hell froze over and Bret returning to WWE closes a nasty chapter in his life and finally gives closure to the Montreal Screw Job. Hart’s Mania match with McMahon was awful, although his contributions on Raw were effective and entertaining. For newer WWE followers, however, I would think that this storyline must not have meant much. – Andy

8 – The walking wounded in WWE
Seemingly more this year than in the past, WWE was plagued by the injury bug, with virtually every wrestler taking time off to nurse one injury or another. Triple H, The Undertaker, CM Punk and Evan Bourne are just a few of the top names that were forced to the sidelines this year, and there are serious concerns now that some careers may be done, which could mean a few lean years ahead in wrestling. – Jon

9 – Linda McMahon runs for Senate
She got thiiiiis close. Linda McMahon’s ambitious bid to become a member of the U.S. Senate carried on in 2010 as she made it all the way to the decisive Republican vs. Democrat battle; but in the end, she came up a bit short. To this point, Linda has yet to resume her role in WWE’s head offices. – Jon

10 – TNA’s ECW reunion
A great idea… if it was done five years ago. ECW is dead and gone, killed slowly by Vince McMahon’s wretched repackaging of it. The extreme originals at least got a better send off than with WWE, but with their stars a few years older and slower it just didn’t have that special nostalgia feeling that TNA was hoping for. – Andy

11 – Ring of Honor’s losses and gains
It’s becoming a running theme in Ring of Honor — wrestlers depart, others come back. This year, the indy promotion lost one of its best talents in Tyler Black and a hot tag team in the Young Bucks, but on the other side of the coin welcomed back Chirstopher Daniels, while also gaining WWE departees Shelton Benjamin and Charlie Haas.

The staff at SLAM! Wrestling wish you and your loved ones a happy and healthy new year.