Kaval vows ‘I won’t be forgotten’

Fans of WWE are used to talent releases by now. While some of the releases are obvious, there are others that seem to come out of left field. Like Kaval.

The winner of the second season of NXT, Kaval had fan support and had been given a push by the company. But Kaval, whose real name is Brandon Silvestry and is best known on the indy circuit as Low Ki, states he actually pushed for his release from the company. 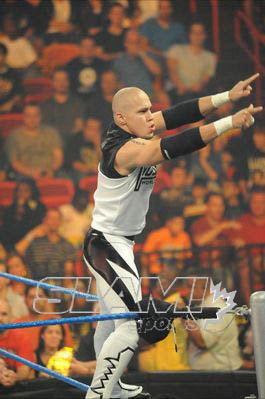 He felt that the company had no plans for him once he debuted on the Smackdown brand. “I asked for my release, both WWE and myself agreed that it would be best if we didn’t continue doing business together at this current time. They had no path for me or any plans in the near future so instead of wasting my time and my body for them, I decided it was time to move on,” he told SLAM! Wrestling.

“I can’t comment on other guys who have left or wanted their release. But if you’re not happy there then just leave, simple as that.

“I’ve had a good relationship with them [WWE] the entire time I was there regardless of what people may think. I have always had strong relationships everywhere I have gone; there are no bad feelings from either end.”

For most wrestlers, being in the WWE is the ultimate goal. Under most circumstances, leaving the company would be a devastating blow.

But for 31-year-old Low Ki, working for WWE was more of a bonus rather than a career aspiration.

“It was never a goal of mine; a lot of people misunderstand that. Simply because the WWE is the biggest company in the world, it was never my dream,” he confessed.

“I’m sure for others they have always wanted to go to WWE but for my personal goal it was always to go to Japan and to be accepted by the Japanese culture as a competitor.

“WWE was just a bonus for everything I have worked so hard for in my 13 years in this business.”

Despite leaving WWE on good terms, Silvestry was understandably disappointed with the way the company treated him, feeling that WWE could have done more with him.

“WWE is a very big political game, and I already knew what the environment entailed, if you play that political game you stand a much better chance of succeeding in a particular role or position,” he explained. “I’m not a politician; I don’t see the need in playing these games especially when the business is suffering.

“I think the way they scheduled my matches on Smackdown, after NXT it was obvious they weren’t behind me. I was chosen to win NXT season 2 by the fans, they wanted to see me do well and at first it seemed like the company wanted me to do well.

“People have to be very careful when they refer to the company not doing much with a certain talent. There is only one man who makes decisions, he says yes or no and that needs to be made clear. I’m not going to even mention his name but the company has their own view on who is going to be a star or not.

“If you don’t fill in that particular prototype or that idea then you are going to have a more challenging time in regards to a push or trying to excel. I feel this was the case with me; they have always been more about bigger guys. The company could have been behind me a lot more. They also could be behind a lot of guys more.”

Despite being in the wrestling business for more than 13 years, Silvestry was announced as being on the second season of NXT. While many speculated that this showed disrespect toward him and what he has accomplished outside WWE, Silvestry didn’t see it this way — he just was glad to get out of Florida Championship Wrestling.

“What people don’t know is I voluntarily went down to FCW, I injured my knee while down there and was out for nine months. So when announced on NXT, I was so happy to be getting the chance on the main roster I didn’t mind as I had been waiting over a year for my call-up.

While on NXT, Silvestry was mentored by Michelle McCool and Layla, this outraged a lot of fans who followed his career, seeing this as a move by WWE to disrespect the former Ring of Honor Heavyweight Champion. Silvestry, on the other hand actually enjoyed having the team of LayCool as his mentors.

“I got along great with those two women. The biggest effect they had on me was relaxing me, up until that point I had been more of a fighter, more sports orientated less entertainment based,” he said. “I think that because their personalities were so over the top it actually relaxed me and they had me laughing a whole bunch, during the entire time we worked together.”

One of the biggest moments in his WWE career was winning NXT season 2, which meant a lot to Silvestry as the final was held in Albany, New York, which is not that far from where he was born and raised, Brooklyn, NY.

“Winning NXT to me was a great feeling. It was fulfilling to finally go back home and to win it in my backyard after 13 years of developing my craft. I almost broke down when I dropped to my knees after they announcing I had won.

“As for NXT itself, I can see that they are trying to offer variety, but for me there is only so much of that stuff that you can sit through and watch. I think sometimes it’s misleading saying these guys are going to be the stars of tomorrow but then they will make them look like fools.

“I’m not a fan of it; the stars of tomorrow should be showcased as such and shouldn’t necessarily do some of the things they are made to.” 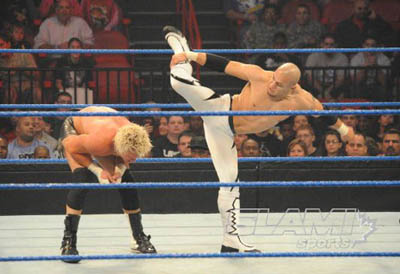 Throughout WWE’s history, the company has always wanted to add their own mark to every talent that steps into their ring. The promotion loves to groom young talent and make their own stars so when a worker comes into the company having already gained success from outside WWE; it is not always seen in a good light.

Silvestry believes that the success he gained outside of WWE may have gone against him during his tenure in the promotion.

“I took a different path to most of the guys who are coming into WWE now and I think because I made a name for myself outside of the company, they didn’t like that,” he theorized. “I can’t and couldn’t ever be recognized as a WWE guy. I was never made by the company and I do think that was an issue.

“This is the biggest company in the world but they don’t have that stamp on me because I made a name for myself all around the world before entering. They would much rather take pride in saying they created you and I think that went against me.”

Looking to the future, Silvestry has denied a venture to mixed martial arts, despite his respect for the sport. He is also unsure of which major wrestling promotion he will end up at next, despite his previous affiliation with both TNA (first as Low Ki, later as Senshi) and ROH respectively.

“I am always asked if I would go to MMA but I am a professional wrestler it’s what I’ve spent the last 13 years perfecting. I just want to get back to work and continue wrestling,” he said.

“I will always go where my experience takes me and where I go next will be no different. At the moment business is down in pro wrestling and I can’t really say where I would like to go but I have obviously had strong connections in the past with ROH and TNA.

“I take pride in my profession and every time I step in that ring I want to make sure that at the end of the night people are getting their money’s worth, when they watch me. Regardless of the show or promotion I will give you my all.

“I have to stay active, because if you don’t continue doing something of quality or value in this business you are lost and forgotten. I won’t let myself be forgotten.”