Low-Ki is like no other pro wrestler of the 21st Century. While most entertainers thrive on being outspoken, charismatic and connected to the people, Low-Ki is a silent machine that thrives on being discreet. 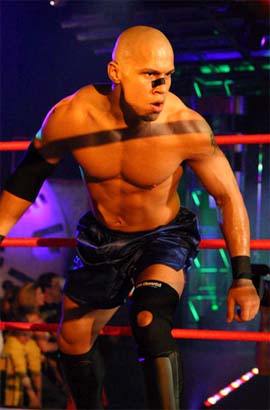 “I chose the name because of my overall personality,” he told SLAM! Wrestling. “I’m not flashy or an outstanding people person.”

Before he became famous on the independent scene as Low-Ki he worked for the XWF as Quick Kick. His background in aikido and karate helped him to create a persona of a deadly martial artist. Low-Ki lives by, “Respect, honour, discipline and dedication”. He takes that theory into the ring with him every night.

Growing up, his favourite wrestlers, whom he felt displayed a lot of respect, honour, discipline and dedication, were The Great Muta, Sting, Hulk Hogan, Legion of Doom and The Steiner Brothers, to name a few. When his friend from Junior High had access to a ring, Low-Ki figured he should go for one practice.

In 1997 he began training with Homicide in St. John Baptist Church in Brooklyn. At first Low-Ki’s family thought it was just a hobby for him, but as he developed his character, he just couldn’t leave the business.

“I never wanted to be a wrestler before I became one,” he said. “Like someone said to me in the past, one day… you just wake up.”

That someone was Kevin Kelly. Low-Ki says Kelly helped him to develop and mature as a wrestler. They worked closely together helping Low-Ki elevate his career. As a singles competitor and in tag team competition, Low-Ki has wrestled for numerous organizations all over Japan and the States.

“I am a freelance fighter in the U.S.,” he said. “I’m more content being freelance. I want experience. I feel being free to explore what the world has is best for me. Kinda like a hippie.”

Low-Ki has also wrestled in the past for the WWE against the late Crash Holly, Essa Rios and Raven. In February of 2001 Low-Ki conquered the independent scene’s most respected tournament, ECWA’s Super 8. It was their fifth annual event and said to be one of the best. It was in that tournament that Low-Ki defeated the American Dragon to win.

“I was nervous going into it because I had very little sleep and I had fought two matches the night before. After I won, I was relieved and proud, but also exhausted.”

After the Super 8, both Low-Ki and American Dragon were heating up the independent scene. In April of that year the two tagged up to win the ECWA tag team championships. In October of that year, Low-Ki would again face off in a tournament finals with American Dragon. This time it was for the APW King of the Indies Tournament. Unfortunately for Low-Ki, Dragon was on top of his game and came out the winner that night.

“I’m never happy with what I do, so going into it I was ready to fight for another notch on my belt. The match was very physical and I thought my jaw broke when he (American Dragon) hit me while upside down, but I was able to continue and have a strong match.”

“I consider him a good friend. He just has that “IT” factor about him to be a pure pro wrestler.”

Lately Low-Ki has been tagging up with Spanky in Zero One and across Japan and the U.S.

“Low-Ki’s probably the most fun wrestler to watch,” said Steve Corino of Zero-One.

Although still listed as a member of the NWA-TNA roster, Low-Ki has moved on to become a fighting ace with the Japan based promotion, Zero-One. As he professed, competing in Japan matches his ring style of embracing a serious, strong style wrestling environment.

“I think I’m slowly creeping into it (Japanese wrestling culture). There pro wrestling is well respected and not taken as a joke,” he said. “Japanese pro wrestling is a very demanding athletic competition. You are more prone to injury because of the level the fighters have, such as shoot-fighters and fighters from other sports.”

After seven years in the business, Low-Ki has accomplished almost everything the independents have to offer. On July 17th, he’ll face fellow X Division Member, Jerry Lynn at 3PW’s show in Philadelphia. After that he’ll be touring with Zero 1 throughout July and August.

Christopher Daniels: “For some reason at night, I can see him dancing in some weird yellow outfit.”

Elix Skipper: “I’m waiting for some one to say it isn’t his house when he asks.”

AJ Styles: “I’m telling you he curses, don’t let him lie to you.”

Michael Shane: “Tired of seeing him do his hair, I swear he’s a chick.”

Shane Douglas: “If he corrects me on my grammar and speech one more time…”

Jeff Jarrett: “I haven’t seen him do his strut in awhile, guess that age is kickin’ in.”

Spanky: “I can’t say nothing, I gotta team with him now, lol”

American Dragon: “Anyone but me noticed that he’s looking like more and more of a serial killer lately?”

Rey Mysterio: “I wonder if he does birthday parties? I’m sure girls would like to see him jump out of a cake or something, like during his entrances.”

Shawn Michaels: “One of the few left that seem to be driven by heart.”