Atlas anxious to return to Canada

Tony Atlas has many fond memories of working in Canada; and in particular, in southern Ontario. There’s the night the ring didn’t show up in Kitchener, the recollection of loud and respectful fans that were more like family, the history, friendly faces and, in Tony’s words, “the dag gun food.”

And now Atlas is more than happy to have the chance to revisit those memories when he returns for three big independent shows at the end of this week.

“Canada has always been the best place for guys to go to really feel good,” said Atlas. “You didn’t feel like you were working. When wrestlers came to Canada, it was a paid vacation. So when I come up there, I’m not coming to wrestle. I’m coming on vacation.”

Atlas will be mighty busy on that vacation, which is sure to be a treat to the fans of Ring Wars and Great Lakes Championship Wrestling. 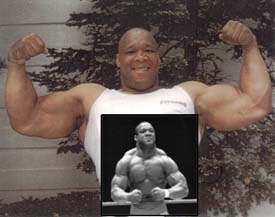 Atlas now and then (inset)

Thursday, March 11 marks the return of the former WWE Tag Team Champion to the province, as he will make an appearance for Chris Drury’s Ring Wars promotion in The Arnie located at Hamilton’s Mohawk College. The show will get under way at 8:30 p.m.

Atlas will also square off against Notorious T.I.D. in the main event of Ring Wars’ Friday, March 12 show at the Albion-Bolton Community Centre. Bell time is 7:30 p.m.

To finish off the set, Atlas will perform for Great Lakes Championship Wrestling (GLCW) on Saturday, March 13. The show will take place at the Boys and Girls Club in Brantford with an 8 p.m. bell time.

Atlas said he has always enjoyed visiting the country, and he looks forward to returning so he can enjoy the sights, scenery and history of Canada. He also has nothing but praise for the Canadian people.

“When you work in Canada, you go shopping, you sit down in some of the most gorgeous restaurants in the world and for us black wrestlers, Canadians didn’t pay attention to our skin. They don’t care what colour your skin is. All they want is for you to be a nice guy, respect them, respect the culture, and have good mannerisms. They like that. If you do that, they’ll love you to death.”

A big fan of Canadian non-fat food, and a former three-time Mr. USA, Atlas claims to have eaten 10 pounds of smoked salmon a day on previous visits to the country.

He has grown to appreciate the country and it’s people after working with countless Canadian wrestlers through the years and was trained by two Canadians, Hamilton’s George and Sandy Scott.

“If it wasn’t for Canadians there’d be no wrestling in America,” said Atlas. “When I first started in the business, 90 per cent of the wrestlers in America were from Canada. A lot of the big name wrestlers have always been from Canada. Bret, Stu, Owen, Neidhart, Dino Bravo, Rick Martel and even Andre. The biggest, most powerful and impressive wrestler of all time was from Canada! It seemed like everywhere you looked, wrestlers were either from Canada or the border of Canada. You were either from Canada, or Minneapolis, Minnesota. I think I was one of the first who broke in from the southern U.S.”

Atlas added that coming to Canada in the “old school” days often felt like a homecoming for everybody involved because so many workers were Canadian.

“If we were working in a wrestler’s hometown, well then we knew the whole dag gun town before we left,” laughed Atlas. “We weren’t there just to wrestle. We were there to see friends, make new friends, play with children, grandchildren, the whole nine yards. But that’s how wrestling was back then. A person in Canada would go out of his way to meet me in the airport, take me to the hotel, take me to the gym, go to eat, go shopping for the wife and kids, and he’d help you the entire time. And after the show, the fans would meet the boys at the bar, sit back and have a couple beers. We were very personal with people in Canada. That’s what made wrestling popular in the first place – it’s the only sport where the athletes came in contact with the fans.”

Atlas said he feels the business has changed since those days but he definitely hasn’t changed his list of priorities.

“I’m from the old school where the fans are number one,” said the former bodybuilder. “Without the fans, there’d be no Tony Atlas, no Hulk Hogan, nobody.”

“You don’t find that too often in this business,” said Drury. “He’s a great guy to have on your card, he’s great to work the crowd and he’s old school. He knew the fans were the people who made him his money and who made him who he was and is.”

Many local Orangeville wrestling fans – especially those who were young kids at the time – recall Tony’s last visit to the area. Atlas took part in an ICW event at the Orangeville Sports Complex in 1989 where 600 wrestling fans packed the arena.

At the end of the show, Atlas did an interview with a local newspaper where he told them, “I’m coming back up. I’ll be back here some day.”

And now, 15 years later, that day is March 28th, 2004. Atlas will step into the ring at the Orangeville Fairgrounds Coliseum for Ring Wars where he will be a part of the main event in a show dubbed “Return Of A Legend” in honour of Atlas. Bell time is 3 p.m.

“When you bring most other big name workers in for shows, they want to be put up in nice hotels, money for a car while they’re here and a lot more,” said Drury. “But if you book Tony, the guy will bust his ass to make people come to the show. And then once the people are there, he’ll bust his ass to make sure they enjoy the show.”

Drury recalled one incident where Tony asked for Drury’s car keys in Orangeville. Atlas proceeded to drive to Lindsay, Ont., where he made a stop at the local radio station. Atlas then walked into the station and simply told the DJ he was boring and took the studio over. Being a big advocate of keeping kids off of drugs, Tony then contacted the local high school principal and within an hour he had a “say no to drugs” assembly organized at the school.

Reggie Marley, independent wrestler and co-promoter of GLCW, also has fond memories of Atlas, watching Tony’s work while he was growing up.

“When I was growing up he was one of my favourites and to this day I still like his style. He was sports-entertainment before it was the norm,” said Marley.

Drury and Marley both credit Atlas’ in-ring work and agree the fans of Ring Wars and GLCW remember who Tony is and are in for a lot of excitement.

“I’ve been on several poster runs and people always say ‘I remember Tony, that guy was friggin huge.’ I think he’s bigger now, size-wise, than he was back then,” said Marley. “They should appreciate his ring work – for an older worker he has really kept up with the times. It’s going to be a big night.”

It’s been a while since Ontario wrestling fans have had the privilege to watch Tony Atlas perform. But all of that is about to change.

Jason Smith is a young journalist at Conestoga College in Kitchener, Ontario. He’s from Thamesville, Ontario and has grown up fascinated with the world of pro wrestling. Smith is very happy to be a part of SLAM! Wrestling and enjoys writing about the sport he admires. He can be emailed at [email protected]