Former WWE and WCW superstar Raymond Hernandez, (AKA: Hercules Hernandez) passed away in his sleep Friday night, March 5, 2004. He was 46.

Though Hernandez had notable success in many promotions during the early eighties, most fans will remember him as the chain-swinging backbone of Bobby Heenan’s heel stable in the WWE. Although Hernandez never achieved main event status there, the muscle-bound powerhouse was a solid mainstay of the promotion making his presence felt in WrestleManias 2 through 7. 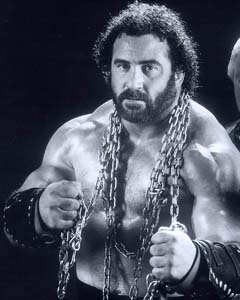 Hernandez began his career in 1982, primarily wrestling in Florida and Texas. At that time, he was managed by Sir Oliver Humperdink. The highlight of his tenure being his feud with wrestling legend Harley Race.

Teamed with Canadian Dewey Robertson, Hernandez won the Central States Tag Team Championship. The switch to tag team wrestling was beneficial to Hernandez who would be the backbone of many teams throughout his professional life in pro wrestling.

In an interview at the Pro Wrestling Hall of Fame dinner in Blasdell, New York, Saturday night, Robertson recalled Hernandez arrived in Kansas City, with only ski boots to wear in the ring. Promoter Bob Geigel tried to discourage Robertson from helping Hernandez, especially leading the match when they fought in the ring, a role traditionally expected of the babyface.

Moving on to the Mid-South area, Hernandez fell under the tutelage of Mr. Wrestling II. Later, Hernandez joined forces with his future WWE stablemate — Ted DiBiase — to form the Devastation Inc. The team was managed by General Skandor Akbar.

In the mid-’80s, Hernandez joined the WWE and in his first appearance at a WrestleMania (WrestleMania 2), he battled veteran Ricky ‘The Dragon’ Steamboat. By the time WrestleMania 3 rolled around, Hernandez had made his mark in the promotion and was elevated to a prominent feud with face Billy Jack Haynes over who had the deadlier full nelson finisher. The feud culminated in a memorable and bloody Chain Match at the broadcast. From there, Hernandez was positioned as the strongman to beat. He was booked in feuds with the Ultimate Warrior, Earthquake and other “big men.” His persona getting a bit moldy in that role, Hernandez was repackaged in a tag team with Paul Roma as “Power and Glory.”

Having not won a heavyweight title of any kind in the WWE, Hernandez moved on to World Championship Wrestling in the early ’90s in a brief stint as the masked Super Invader managed by his one-time foe, Harley Race. Hernandez then teamed up with another strongman — Scott Norton — and put together the “Jurassic Powers” tag team in the IWGP promotion in Japan. The team beat The Hellraisers to win the tag team titles there.

Details of the funeral arrangements for Hernandez will be forthcoming in the next few days.