I’m struggling a bit with how to review the new autobiography by Dustin Rhodes, Cross Rhodes: Goldust, Out of the Darkness. On one hand, it’s an insightful look into Rhodes, and his personal battles, but it really doesn’t go in-depth enough into the workings of the business or his career to really give it a thumbs up. 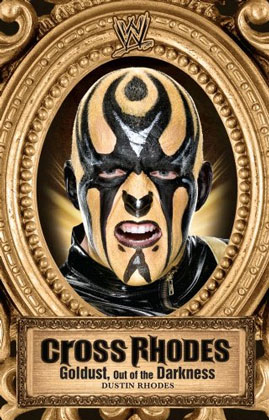 Maybe it’s because I was pissed off right from the first paragraph, which started off great before annoying me.

“I started writing this book years ago while sitting in my pickup truck with a handful of pain pills circulating through my body and a bottle of vodka on the passenger seat,” Rhodes starts off, explaining his reasons for writing. “I was looking for the truth about me, drug addiction, and the old-school world of sports entertainment that grabbed me as a small child and has never let go.”

What do you want to bet that in his original notes it doesn’t say “sports entertainment”?

Sports entertainment is not “old-school,” and Rhodes, despite the at-one-point daring and controversial Goldust character, is one old-school dude.

The necessary details are all there: growing up the son of the legendary Dusty Rhodes, and the subsequent difficulties they have had; getting into the business and training; his WCW days; his WWE days; his half-brother “Dashing” Cody Rhodes; marriage difficulties; battles with pain killers and alcohol. His awkward, brief tenures in latter-day WCW (1999-2001), and TNA (2004-05, 2007-08) are perhaps justifiably neglected.

In the end, it all feels so compressed.

At his heyday in WCW, he was a kick-ass babyface, standing up for what was right, and willing to take a beating in the process. His four-year run, from 1991 to 1995, is mentioned, yeah, but not to the extent I would have liked. We get no real analysis of the characters or people there, or why things happened when they did. I recognize that say, Arn Anderson, is a great wrestler, but why? What made him so? What discussions went into making the matches? How did he compare to Larry Zbyszko?

Even the details of the famous bout with Blacktop Bully (Barry Darsow) on the moving semi left me feeling unsatisfied, wanting more.The insight into the Goldust character is a little better, naturally, since he is still doing it (though on the injured reserve list at the moment). “I wondered if Vince hadn’t come up with this character for me to take my dad down a notch,” questioned Rhodes.

But in the PG-world of the current WWE, he was probably limited in how much he was able to really talk about the questionably entertaining antics of the “Attitude Era.”

I do have to say, though, that anyone going back to look at the infamous Hollywood Backlot Brawl with Roddy Piper at WrestleMania 12 in Anaheim, Calif., will never look at the match the same way after learning about all the issues and injuries involved in pulling it off.

And you will be exhausted by just the description of a typical week’s travel plans for a WWE star.

The bar has just been raised so high with autobiographies these days, with the likes of Gary Hart (“Playboy” Gary Hart: My Life in Wrestling with a Little Help from my Friends), Bret Hart (Hitman: My Real Life in the Cartoon World of Wrestling), and Chris Jericho (A Lion’s Tale: Around The World In Spandex) delivering deep, personal, involving — and fun — books.

Maybe that’s what is missing — fun.

In constantly returning to his trials and tribulations with drugs and alcohol, Cross Rhodes comes off as a confessional rather than disclosing, personal rather than personable.