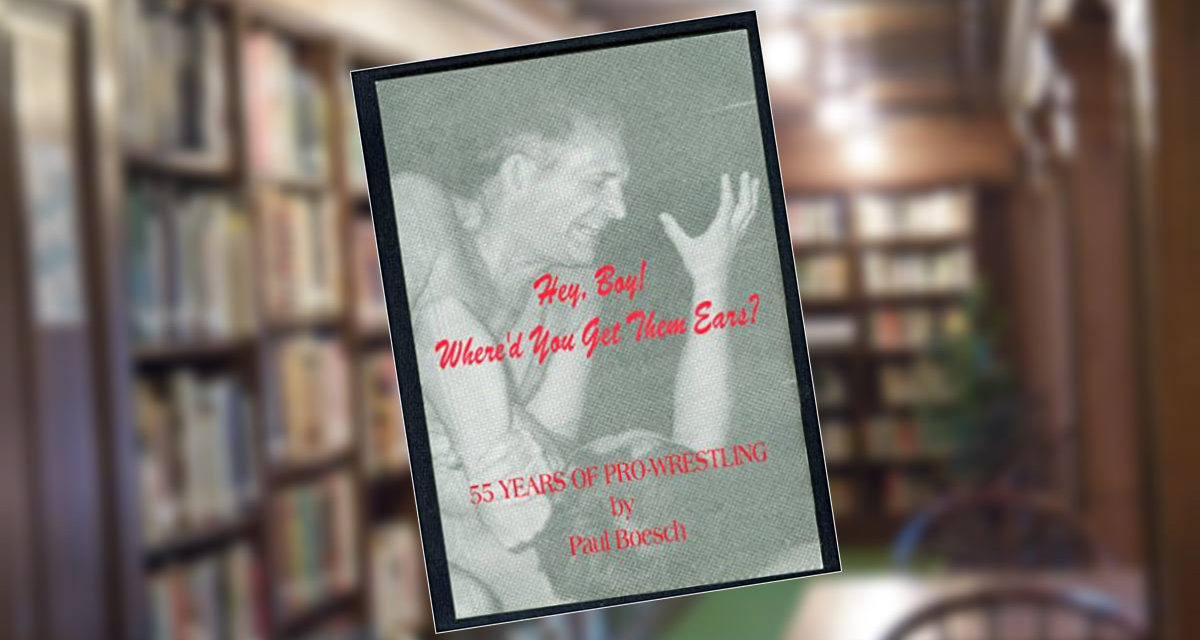 In many ways, famed Houston promoter Paul Boesch is responsible for two great wrestling books. There’s his autobiography, Hey Boy! Where’d You Get Them Ears? 55 Years in Pro Wrestling, which he wrote in 1988 and was recently published by his widow Valerie Boesch. It’s a book that should be essential reading for anyone interested in how wrestling developed over the years.

But Boesch is equally responsible for 1974’s terrific Whatever Happened to Gorgeous George? Author Joe Jares quotes Boesch throughout and credits him for being so open and accommodating during his research. Jares sees through Boesch, knowing at once that the man had seen it all and that any promoter needs more than a little huckster in them to succeed.

In the chapter “Carnival Impresarios”, Boesch tells Jares that he was responsible for the cage match. “I begin to suspect that this charming man has a bit of Irish blarney in him, a compulsion to claim his adopted state started or invented everything from the cotton gin to the flying mare,” Jares writes. “But, on second thought, Texas wrestling is just wild and nutty enough that it is possible he’s not kidding me.”

And we’re not kidding you when we say that Hey Boy! Where’d you get them ears? is a hefty tome, coming in at almost 400 pages. But when a career in wrestling lasts 55 years, then there is lots to tell.

Boesch is initially more interested in documenting the origins of pro wrestling and celebrating the early stars like Farmer Burns, Frank Gotch and Ed ‘Strangler’ Lewis. It is a slow start to his story, but the reward is there for the hearty reader who makes it through.

Once Boesch starts talking about his own in-ring career, which began in 1932 in New York, you’ll be sucked right in. We’re there as he starts wrestling, as he travels the world, as he serves his country in World War II, as his career in-ring is ended and he winds up being one of the first TV announcers of pro wrestling. Later, he falls into promoting.

The New York City-born Boesch promoted first in the Pacific Northwest while still a wrestler, then later took over Houston when Morris Sigel died. He had been the publicity and announcer for the Houston promotion, and moved into the lead role easily. Boesch operated as an independent promoter for decades until aligning with Bill Watts’ UWF and finally the WWF. His take on the demise of the UWF and of the rise / invasion of the WWF is a true insider’s perspective.

Be warned, however. It is a product of the times and adheres to kayfabe. Wrestlers really did fight in the spirit of competition and everything was on the up-and-up in the quaint days before Vince McMahon exposed the business.

Houston was the scene for Jack Brisco’s NWA World title win over Harley Race in 1973, and Boesch took the time to crow. “The changing of a world’s heavyweight title is the ultimate goal for any promoter. To have it happen under his jurisdiction is proof that his matchmaking skills and his assessment of talent justifies his position as a promoter and an authority on the state of the art in wrestling. … I knew the pride of having guessed right … I had crowned a new champion. Now, all I had to do was find someone who could beat Brisco and do it again.”

I loved that Boesch took the time to tell what it was like to travel to and from New Zealand or Hawaii, and what the exotic locations were like. He tells of the fans, the climate, the opponents. The excitement and thrill that he feels going to new places is obvious. His perspective returning to the same locales after the War are even more enlightening and one can hear his heart ache for the way things used to be.

In many ways, the book reads like a letter to friends, a cherished family journal that is at once both serious and jovial, light-hearted and sad. Boesch finished the book in 1988, a year after he stopped promoting in Houston and a year before he died. He had been working on it off and on for 20 years. Though finished in 1988, it was never published. Instead, manuscripts made their way around to various friends and family.

Valerie Boesch, his second wife, had the book self-published in Houston. That’s important to note because Hey Boy! Where’d You Get Them Ears?  is not a polished, slick publication the way that many of today’s wrestling books are. There are only a few photos, and more than a couple typos slipped through. A good editor could have chopped and molded the autobiography into something more commercial, but then it would have lost all of its charm.

Any self-respecting fan of pro wrestling should have Hey Boy! Where’d You Get Them Ears?  on their bookshelf. I know mine is starting to get dog-eared already.