Houston definitely does not have a problem when it comes to pro wrestling. This year’s site of WrestleMania is a city rich in history in the mat game, and was home to one of the most storied single-city promoters anywhere, Paul Boesch.

Wrestling in Houston goes back before the First World War, and between 1915 – 1923, there were matches at irregular intervals. In the mid-1920s, Julius Sigel started Houston’s City Auditorium. Soon the top wrestlers were coming to Houston on steady basis for the Friday night shows.

Around 1929, Julius Sigel left to promote New Orleans and Shreveport, La. and his brother Morris took over the promotion. In a 1981 article for The Wrestling News, the late Paul Boesch described Morris as a promoter. “Morris’ strength as a promoter lay in his ability to bring good business practices into the world. He paid his bills promptly and had an unparalleled reputation for honesty. Matchmaking was not his strong point, but he did surround himself with people who knew the mat game and could evaluate the wrestlers.”

After a serious car accident in 1947, the Brooklyn, NY-born Boesch had to hang up his wrestling tights, and became one of those people that Sigel relied on to create a successful promotion in Houston. Boesch was the radio announcer at ringside and when TV came to Houston in January 1949, he graduated to the boob tube – without ever having seen a television himself!

“For the first nine months of telecasting we started with ‘The Star Spangled Banner’ and wound up when the lights went out,” Boesch wrote in The Wrestling News. “It is difficult to explain, 33 years later, when people are blase and bored with the miracles the tube produces, that the early days were exciting. It is hard to explain how people stood in front of TV sets placed in store windows to watch wrestling; and how Friday night was wrestling party night in someone’s home.”

Eventually, Houston wrestling ended up on Channel 39 and lasted there for more than three decades.

On December 26, 1966, after a long illness, Morris Sigel died. In January 1967, Boesch bought the Gulf Athletic Club from Mrs. Sigel. “I had long known the stress of promotion and was well aware of its possibilities and its promise. For 20 years I had been training for my new position without knowing it. I was ready. Now I could put into practice my own ideas and I alone would bear the responsibility for their success or failure,” Boesch wrote.

He also thought very highly of Paul Boesch. “I thought he was a good promoter, very good. And he was honest, an honest promoter. I really liked him … Whatever he promised you, you got.”

On the Kayfabe Memories web site, Charles Laffere shared his personal memories of the action. “Houston Wrestling was the best. I was raised on Channel 39 every Saturday night from 10:00 to 11:30 P.M. The Sam Houston Coliseum was a dark, dingy, smelly old municipal building in downtown Houston used mostly for heavy metal concerts, religious revivals, second rate circuses, and pro wrestling. … Paul Boesch was a promoter who would bring in just about any wrestler if the guy could draw money. I remember seeing Jose Lothario, Mil Mascaras, Ernie Ladd (a hero in his hometown of Houston, a mega-heel everywhere else), the Funks, and the Briscos. Other stars who came into the area were Brute Bernard, Harley Race, the evil Playboy Gary Hart, Red Bastien, Ivan Putski, Superstar Billy Graham, the late, great Gino Hernandez, Andre, Tony Atlas and Al “don’t call me a Mexican, I’m an Indian” Madril, just to name a very few. So many stars, all with different styles. Boesch would have the Mexican wrestlers do their interviews in Spanish and in English, and while it might seem condescending today, it certainly drew a large contingent of Mexican-American fans to the arena. Boesch did the announcing and interviewed the wrestlers himself and since he was a big man (about 6’5″, 300 lbs.), no wrestler would ever try to intimidate him. He would hold events with AWA, WWWF, NWA,Southwest Championship and independent stars on the same card.”

“Playboy” Gary Hart was the booking agent for World Class from 1977 to 1983, based out of Dallas, and would supply talent to Boesch. “I found Paul Boesch to be excellent in every way. He knew wrestling. He knew his town. He was very protective of his town. If you have any knowledge of Paul, he was one of the few promoters that took talent out of the World Class booking office, he was constantly wanting people from outside. He would bring in people such as Bob Backlund, Bruno Sammartino, Stan Stasiak, Superstar Billy Graham. He was very, very big on the world champions.”

“Houston was probably the jewel of the Texas promotion, second only to the Dallas / Fort Worth area,” Hart said. “Paul consistently drew capacity, or near capacity houses for the years that I was with him, and long before.”

Having started in wrestling in 1960, and knowing the business from his uncle, who helped promote in Chicago, Hart has enough perspective to compare Sigel and Boesch. “I actually believe he did a better job in the town than Morris Sigel did. Paul was an excellent promoter. He had very good ideas about what Houston would accept. It used to be that you could go to Tennessee, and it was silly wrestling. You’d go to Florida or Texas, and it was more full-contact wrestling. Paul was very big on that. He wanted top of the line [wrestlers] or he wouldn’t use you.”

In fact, while Hart would be booking 30-35 wrestlers out of Dallas, Boesch was picky. “He might use 10 or 15 and then I would grab talent from the New York office, St. Louis office for him.”

The early 1980s were a high point for Boesch and Houston wrestling. The affiliation with the hot Mid South promotion run by Bill Watts brought top shows to the area.

Barry Darsow was one of those Mid South wrestlers who had tremendous success. Darsow, who wrestled as the Russian Crusher Darsow and later Krusher Krushchev during his time in Mid South, recalls Houston as an “unbelievable” wrestling town. “I wrestled the Junkyard Dog there in his prime, and it was sold out. Jim Duggan in his prime, and it was sold out. Terry Taylor, back then, we were all in Mid-South. We used to have so many people in, the fire marshal would have to throw people out — that’s how many people we fit in that place.” 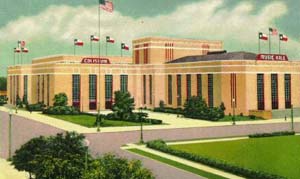 Mid South would come through Houston at least once a month. “When you came into the building, [Boesch would] come back in the dressing room, he’d sit down and talk and tell all his old stories and all this stuff. But the payoffs that would be made at that building were better than any other payoff anywhere else,” Darsow said. “So to me, Paul Boesch was a very, very honest man. He treated all the guys with respect … He made everybody seem like somebody. What a gentleman.”

Mid South became the UWF, and eventually was sold to the NWA in April 1987. Boesch’s relationship with Watts had deteriorated over the years, and instead of going with the NWA, Boesch made a deal to work with Vince McMahon and the WWF. The relationship only lasted four months, and Boesch announced he was retiring from promoting and had a show on August 28, 1987 in Houston before a sellout 12,000 fans.

Then U.S. Vice-President George Bush was among those to honour Boesch via telegram at that final show:

To All Houston Wrestling Fans,

I’m sorry to miss the gala event in honor of my friend Paul Boesch. Paul has made a fantastic contribution to American sports. Through his leadership and foresight, wrestling is now enjoyed by millions of Americans. I treasure my friendship with Paul Boesch. We have know each other for many years. He is a great guy and wrestling will never be quite the same without his firm, principled leadership.

In the obituary in The Wrestling Observer, Dave Meltzer shared a memory of Boesch. “I recall one time, after a fairly bad house, he called me up out of the blue. He told me about the house, and then started giving excuses one after another. The weather was bad. It was the end of the month and money was tight. The economy is bad of late. The TV show got moved back an hour the week before the card because the baseball game went into extra innings. We had to change one of the main events because a guy got hurt two weeks before the card. He had about 15 of them in a row. What I’ll remember most was his last comment. ‘I’m telling you all these things now so you’ll know every excuse I can give you for the fact that I put together a card nobody wanted to see.'”

Since Boesch got out of promoting, Houston was never more than just another stop on the cross-country tours for the WWF and WCW. Hosting WrestleMania XVII will bring back some of the glory.