The Game ready to play at WM 17

Though he is slated to duke it out in what promises to be a grueling match at WrestleMania with The Undertaker, that wasn’t the WWF’s original plan for Hunter Hearst-Helmsley. Bookers initially thought about having The Game work an angle with someone outside of the wrestling industry like an actor or major sports star. Most wrestlers would have found such a proposal hard to accept as the potential for an embarrassing performance is great. Not Triple H. He jumped at the chance to prove himself capable of carrying such a match.

“When that talk came up they asked me if I would be interested and I was like…Yeah. I’d love the challenge. That’s like working with the proverbial broom-stick, right? So, I love that challenge. If you can go out there and rock and roll the crowd with someone who doesn’t even know what they are doing, how much better could that be?,” said Triple H during a WrestleMania media conference call. 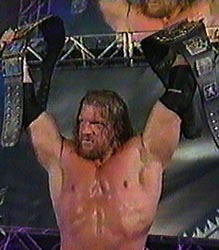 Helmsley’s willingness to take on any task presented to him can be traced to his childhood admiration of wrestling icon, “Nature Boy” Ric Flair. At an early age Helmsley was impressed by Flair’s adaptability in the wrestling ring. From the powerhouse Road Warriors to Arn Anderson and other technical virtuosos, Flair more than held his own in any environment and made whoever he was working with look good in the process. That valuable lesson wasn’t lost on Triple H.

As it turns out, the “outsider” plan was scuttled and Triple H was scripted into a feud with The Undertaker, a man who claims that Triple H may have defeated some of the WWF top superstars but he never beat him in the ring. The ongoing battle of wills came to a bloody climax on last week’s Smackdown! broadcast when Triple H assaulted The Undertaker with a sledgehammer to soften him up before their clash at WrestleMania.

Hampered by chronic hip and knee problems due to his time in the mat wars, there are those who think that The Undertaker’s best years are behind him and that his role should now be to elevate the mid-card wrestlers to main event status. Don’t count Triple H as being one of those people. Coming to his defence, Triple H said Mark Callaway (The Undertaker) is still a hard-working performer who has the skills and experience to headline any card. He has seen a remarkable change in Callaway since his return to full-time duty and that even though his new biker gimmick has been met with mixed reviews, he thinks it will grow on fans over time. Triple H is approaching their WrestleMania match as a way of solidifying them both as serious challengers to whomever walks out of the Houston Astrodome with the WWF World Heavyweight Title.

“I want to put The Undertaker where The Undertaker should be and I want to put Triple H where I feel Triple H should be and that’s at the top. The Undertaker should be at the top,” said Helmsley firmly. “Mark Callaway is one of the hardest working men and one of the smartest working men in this business and he should be in that position. I think his intensity has increased just through this angle with me over the last few weeks and I think that when we go to WrestleMania I greatly intend to go out there and shock a lot of people and have a lot of people go…’Damn! Undertaker and Triple H. They really put on a hell of a performance!’…and maybe it would be something they weren’t expecting. I am hoping we can give that to them.”

As the pre-WrestleMania hype began months ago, many thought that it was a given that Triple H would be in the main event making it a triple threat bout. Whenever that idea was brought up to Helmsley, he says he respectfully declined the opportunity. His decision was based partly on how last year’s jumbled WrestleMania main event played out and partly on the respect he has for The Rock and Steve Austin. Looking back, Triple H wishes that he and The Rock had gone one-on-one at WrestleMania 16 but the decision wasn’t in his hands. After giving it some thought, the WWF bookers determined that the timing just wasn’t right.

Comfortable and confident with his position on the year’s WrestleMania card, Helmsley confesses that in the back of his mind he still wishes he was in the main event. Triple H chalks that up to human nature and his desire to be the best. The fact that his main event wish will be unfulfilled this time around hasn’t softened Helmsley’s resolve at all as the clock ticks down to Sunday’s show.

In this day and age, WrestleMania is not what it once was. Under self-imposed pressure to put out two flagship wrestling shows each week and a pay-per-view every month, the WWF doesn’t have the lead-up time nor the energy to build up WrestleMania as they once did. Consequently, WrestleMania has lost some of its luster. While wrestling fans and media types debate the significance of WrestleMania in the “sports entertainment” era, Triple H maintains that nothing has changed in WWF locker room. It is treated as it always has been, a special stage for everyone to perform at their highest level.

“This is where it all goes down and if you don’t think we’re all jazzed about it, you’re nuts. We are going to go to Houston and there’s going to be 65,000 people in the arena and we are going to do this huge pay-per-view event. It is the Super Bowl to us and whether the hype feels the same to the fans or not, I just think to us it still does. To us, it is still this incredible event,” he said.