Triple H on the collapse of WCW and ECW

Even before it was announced yesterday that the World Wrestling Federation had purchased its long-time rival World Championship Wrestling, Hunter-Hearst Helmsley (Triple H) had plenty to say about why the WWF is still going strong and it’s competitors have tanked.

In a media conference call to promote WrestleMania 17 next weekend, Helmsley blamed WCW’s demise on their lack of respect for the pro wrestling industry.

“As far as WCW goes, I think they lost their passion for the business. I think as a company most of their people were ‘corporate people’ working for Turner that were pushed down to the ‘wrestling thing’ and I think many of them were just nine-to-fivers that would go….Ah, I don’t want to do this wrestling crap. I’d rather be doing some other thing in the company but I got stuck down here doing this,” said Helmsley assessing the situation that led to the WWF’s takeover of WCW. 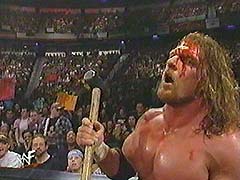 HHH, seen here at No Way Out 2000, had plenty to say on the sale of WCW to the WWF during a media conference call to promote WrestleMania 17.

But it is not just the “suits” who Helmsley holds responsible. He points the finger at some of WCW’s veteran talent who he claims did as little as they could get away because they were guaranteed a sizable pay cheque from the company no matter what kind of effort they gave. According to Triple H, that’s what set the prosperous WWF apart from a continually floundering WCW.

“We (the WWF) care about putting out a great product. We care to entertain you better than anybody else and we care to make sure that every aspect of our show is as good as we can do it,” he said. “Yeah, we make mistakes. Yeah, sometimes a storyline is not where it should be but we work to change it and we are always striving to give the best product that we can because everybody in our company from the lowest guy on the totem pole to the top guy on the totem pole — which is Vince McMahon — everybody shares that passion about our business and that’s why we are Number One. That’s why we will continue to be successful as other people fall.”

The one legendary performer Triple H holds in high esteem for preserving through all of WCW’s woes is “Nature Boy” Ric Flair. Helmsley admits that Flair isn’t what he used to be in the ring. That being said, Helmsley views Flair as still incredibly fun to watch and an asset to any company he works for. He gives him full credit for remaining enthusiastic and professional.

“When I would watch their (WCW’s) show sometimes over the last year one of the only things that I would find mildly entertaining was when Flair would come out because I knew he was going to cut a good promo that would make me laugh or something,” Triple H said. “When I would watch him wrestle and I would think…God, that’s just not the Ric Flair the way I want to remember him…but I tell you what, I would still go out there and watch his matches because he would show me more passion in the ten minutes he would wrestle than anybody else on that show. I cannot help but respect that. Ric Flair in this day and age still loves this business, still has a passion for this business, and still wants to do it badly. I have all the respect in the world for that as opposed to guys who are in their prime and basically are just going…Well, hell. I got my money. I am going to go sit home. Why should I bust my ass? I make the same money.”

Turning his thoughts to ECW’s downfall, Helmsley commended their struggle and effort to be successful even though they were the obvious underdogs. He viewed them as a “good training ground” and a “benefit” to the industry when they were at the top of their game. Unlike WCW, it wasn’t laziness or an uncaring attitude that toppled ECW. It was simply some “bad business decisions” that paved the road to ruin.

“I look at what he (Paul Heyman) did with some of the talent, and that’s not to belittle anyone there, sometimes he didn’t have the most talent to work with but he made the best of it and that’s genius to be able to do that,” Helmsley said of ECW owner Paul Heyman.

Having virtually abandoned ECW as a wrestling promotion for the time being, Paul Heyman has joined the World Wrestling Federation as a colour commentator and a behind-the-scenes booker. Triple H is glad to have him aboard. The creativity and devotion he brings to the job is inspiring others and shaking up what critics have termed as a bland WWF product heading into their biggest show: WrestleMania.

“As far as him (Heyman) being here, he’s great. He thinks outside the box which is tremendous. I think he has been and will continue to be a huge help in this company and the biggest thing that I like is Paul is so passionate about the business and I think that’s why guys worked for him for so long when they weren’t making money,” remarked an excited Helmsley. “Paul is such a passionate guy that when you talk to him about wrestling you just cannot help but have that same feeling he does. He just gets you hyped up about the business and you just want to go out there and perform.”

Of the talent Heyman brought along with him Helmsley sees good things in the future for Justin Credible and Rhino.