“The WWF have declared war on the media. Not the entire media, mind you. They’ll gladly talk to newspapers, radio and TV stations or any news agency that doesn’t regularly cover pro wrestling. But they’ve cut off wrestling Internet sites almost entirely.”

Here we go again. In September 2000, I wrote an editorial taking the WWF to task for its archaic media policy which prohibited any WWF performer from granting an interview with a reporter without checking with the office first.

“While the WWF claimed the policy was put in place because they viewed SLAM! Wrestling and other wrestling web sites as “competition” for WWF.com and they don’t want to help supply content for their “competitor”, the real reason was the WWF wants to manage its image and control how it’s portrayed in the public eye. To that end, they’ve cut off contact with media agencies that could potentially hurt hem.”

That’s what I wrote almost two years ago.

After causing a bit of a stir I was contacted by Jim Ross, the Executive Vice President of Talent Relations for the WWF (a fancy title that means he’s the second most powerful man in the company behind Vince McMahon). We talked about the policy at length during several phone conversations and eventually it was scrapped.

Since then, SLAM! Wrestling has enjoyed a mutually advantageous relationship with the WWF. After ditching the policy, the WWF opened its doors to the online community, including inviting several high profile web sites to take part in the monthly TNN conference calls prior to each pay-per-view. Requests for interviews with WWF talent by SLAM! Wrestling were handled and set up in a professional, timely manner.

In addition to being on the WWF’s ‘A-List’, of wrestling web sites, SLAM! Wrestling fostered a relationship with Jim Ross, gaining an access to him that very few other web sites enjoyed. In the aftermath of my editorial, Ross invited me to call him at any time should I ever need him to comment or confirm a story I was working on. His candour in those interviews was refreshing and allowed us to write dozens of articles on the state of the WWF as viewed by one of the most powerful men in the industry.

Still, SLAM! Wrestling was not hesitant to criticize the WWF when the situation called for it. While we were critical of some of the WWF’s storylines and the general direction of the company at times, we did so in a professional manner. Although he did not always agree with some of our criticisms in respective editorials and columns that we published, Ross told us that he believed we helped to set a standard of professionalism among pro wrestling web sites for our ‘hard-hitting’ coverage.

Despite being on opposite sides of the fence (being a reporter who scrutinized the WWF, our relationship was adversarial in nature) Ross paid me several personal compliments, impressed with the “diligence” and “fair manner” in which I did my job. His words, not mine.

For close to two years SLAM! Wrestling — and not to mention other respected web sites – went about its business covering the trials and tribulations of the WWF, thinking that as long as we continued to do so in a professional manner, we would enjoy a mutually profitable relationship.

So, you can imagine my surprise when I surfed into WWF.com last Wednesday and read its Open Letter to pro wrestling newsletters and Internet sites (posted below): 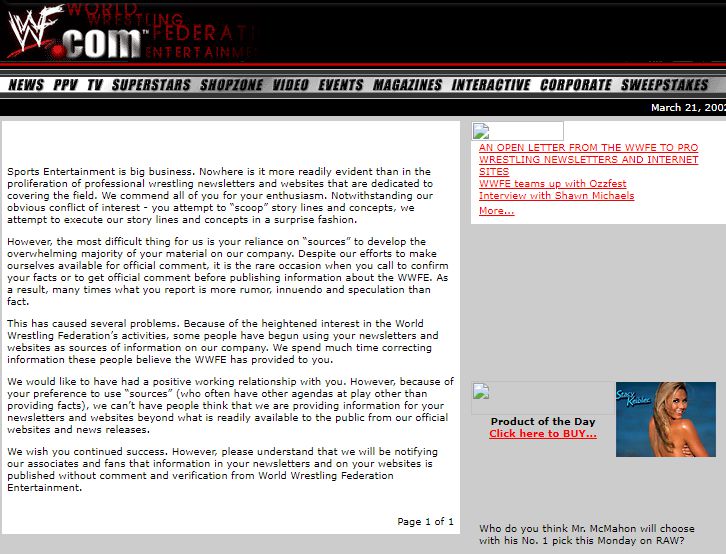 Sadly, it now looks like we’re back to Square One.

I knew it was too good to last.

There’s been a lot of conjecture amongst fans over what this statement, actually means. SLAM! Wrestling has been inundated with e-mails from readers curious to find out how this will affect our coverage. I’ve spoken with one or two key people in the WWF’s front office and I have traded ‘notes’ with several other reporters at other web sites who have done their own digging.

In a nutshell, this is what we’re dealing with:

So what’s the reason behind the WWF’s about-face?

According to the WWF’s ‘Open Letter’ it is the proliferation of news articles by online and newsletter reporters that make use of anonymous sources.

The ‘Open Letter’ states the following:

‘Despite our efforts to make ourselves available for official comment, it is the rare occasion when you call to confirm your facts or to get official comment before publishing information about the WWFE. As a result, many times what you report is more rumour, innuendo and speculation than fact.”

Where do I even begin to address this nonsense?

I suppose I could start by pointing out the not-so-coincidental timing of this policy. Only after the WWF milked and bilked as much coverage out of SLAM! Wrestling and every other wrestling web site it could for Axxess and WrestleMania, did they decide to conveniently end all communication. Such a move not only demonstrated a gross display of bad faith, but also revealed the scurrilous way the WWF does business.

I suppose I could start by pointing out the irony of how a company that professes to be a sworn enemy of censorship and staunch defenders of free speech and the First Amendment has little respect for the independence and freedom of the press.

The day before the ‘Open Letter’ appeared on WWF.com, the WWF announced that they were heading up the Smackdown Your Vote! Campaign, a project geared at registering more voters in the United States.

Democracy, in case Mrs. McMahon didn’t know, is also built on the strength and independence of the media and the press to serve as a watchdog in order hold those in power accountable. By its actions with this policy, the WWF had made it clear that they have no respect for democracy at all.

And I suppose I could start by pointing out that while the ‘Open Letter’ states “it is the rare occasion when you call to confirm your facts or to get official comment before publishing information about the WWFE,” that SLAM! Wrestling and other web sites and newsletters have gone to great lengths to do exactly that.

You need only look at our stories in the past on the return of Scott Hall and Kevin Nash, the signing of Jerry Lynn and Rob Van Dam or on the controversy over Big Show’s racial remarks on an edition of Raw Is War as examples.

All of these stories, and several others that have appeared on SLAM! Wrestling, have official comment from the WWF.

So how will I start to address this policy?

How about with the WWF’s laughable expectation of wrestling web sites and newsletters to report as news “what is readily available to the public from our official websites and news releases.”

The WWF would have us report press releases and news items on their web site verbatim on SLAM! Wrestling without so much as questioning its authenticity and news value or having to answer any questions about it.

How the WWF is able to keep a straight face while maintaining such a ridiculous position is beyond me.

I realize the WWF is living in a “fantasy land” and is unfamiliar with how things work in the real world so allow me to enlighten them.

Pro wrestling web sites and newsletters are not here to help them promote their product and company. That’s what the WWF’s public relations department is for.

Our job is to report the news totally independent of the WWF’s influence and authority. It is a responsibility that everybody here at SLAM! Wrestling takes very seriously and one that is shared by other web sites and newsletters.

Considering the WWF currently enjoys a monopoly on the industry, that job is now more important than any other time in history.

Furthermore, unbeknownst to the WWF, the use of anonymous sources is not only perfectly legitimate, but integral to the practice of journalism.

I have read several commentaries over the past few days about WWF’s unreasonable expectation for journalists to not use anonymous sources. I could easily offer my own verbose diatribe on the subject, pointing out the WWF’s temerity and arrogance in actually expecting the media to bend to their whims and wishes.

Instead, I think SLAM! Wrestling contributor Nick Tylwalk said it best in his column last Friday:

“To me, the more interesting facet of this situation — especially after reading the thoughts of the staff and readers of SLAM! Wrestling  — is the WWF’s notion that the normal rules of journalism don’t or shouldn’t apply in the world of wrestling. Since the biggest beef in the WWF.com statement seems to be the use of anonymous sources, this is the only conclusion at which I can arrive. After all, I can’t think of any form of legitimate journalism that doesn’t use anonymous sources to help gather information. Yet the WWF seems to think wrestling sites should report only the official company line.”

A more articulate, intelligent and lucid summation of the crux of the WWF’s media policy I have yet to read.

Since the “Open Letter” first appeared on WWF.com last Wednesday, I’ve spoken with several news editors and reporters who have been in the media for over 20 years, as well as numerous public relations people at several big companies (all of whom know nothing about wrestling and couldn’t pick Ric Flair out of a line up if their lives depended on it).

I showed them the WWF’s statement and told them about the WWF’s media policy and asked them for their honest feedback.

Everybody said they had never come across any company with such a ridiculous policy.

Picture this: Bill Gates and Microsoft become irate over a series of stories that used anonymous sources appearing in the Washington Post over the period of one year. In his anger, not only does Gates decide to end all communication with the Post but also decides to cut off all communication with every single newspaper in the U.S.

And yet, that’s exactly what the WWF’s decision is tantamount to.

But of course, this media policy isn’t about the use of anonymous sources or calling the WWF office to get official comment on stories.

As Nick so astutely pointed out, it’s about the WWF and their expectation that “wrestling sites should report only the official company line.”

It’s about Vince McMahon and how he hates anybody that dares to question his wrestling genius.

It’s about how newspapers and mainstream, media sources – forever duped into reporting McMahon’s revisionist version of wrestling history as fact – have been smartened up by wrestling web sites and newsletters and can now see through his line of bull. (Read Toronto Sun reporter Perry Lefko’s series of stories based on a recent interview with McMahon for evidence of that.)

And it’s about how McMahon, ever the corporate shyster and fixer, can no longer control and manipulate the media like he once could.

But more on that in a follow-up editorial later this week.