MLW Fusion: It’s a family affair between the Von Erichs and the Mortons 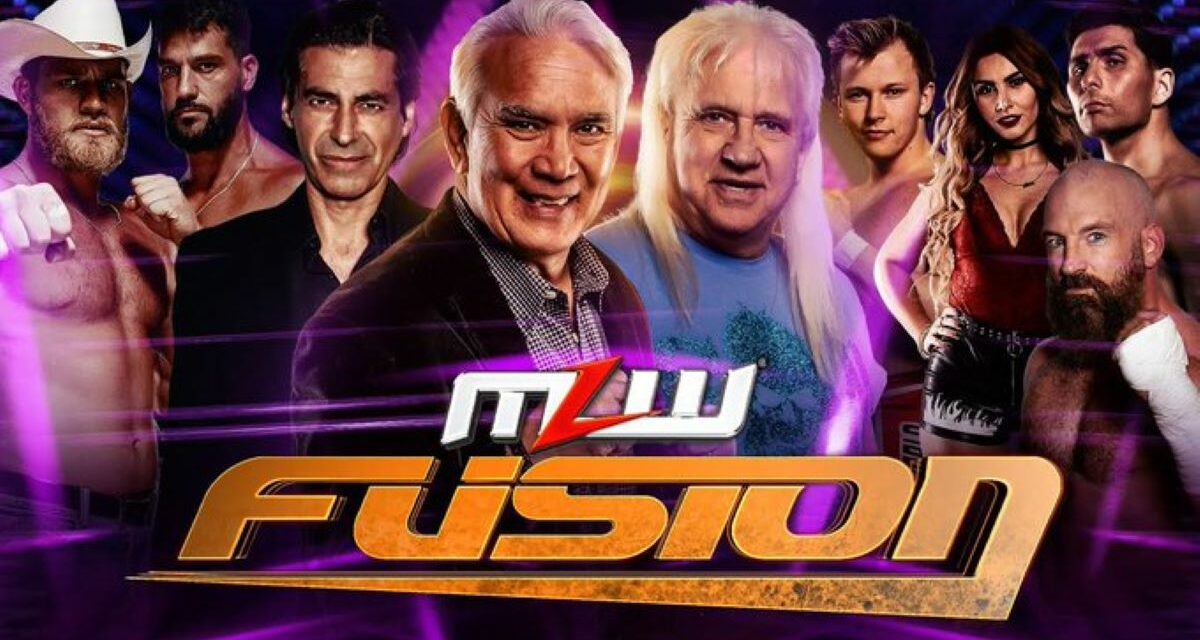 Of all the wrestling family dynasties, among those storied names are the Von Erichs.  But add another name to that list, as Ricky Morton of the Rock N’ Roll Express joins forces with his son, Kerry Morton, in a tag team main event for the Charlotte crowd. With that and a title bout between TJP and Myron Reed for the MLW Middleweight belt looks to be a barnburner night.

We are coming to you from the Grady Cole Center in Charlotte, NC. Rich Bocchini and Joe Dombrowski have the call, and the show goes to a cold open as Cesar Duran enters the ring with his Azteca Stooge ™ to address the renegades.  He says Charlotte is nice, but it’s not Mexico, and proceeds to call the Center “a trash can of ghosts.” All of a sudden, things get “Sirius” in Charlotte, and…

He comes out, and Duran tells him to kiss his… ring. “The Dragon” says he won’t do that, and he is the guest matchmaker of the night, and Duran is now under investigation. So Vaya con Dios, El Jefe, as security escorts him from the building and the Stooge ™ is dragged out kicking and screaming.

No sooner has Steamboat established order than Richard Holliday comes out with Alicia Atout and suggests to the booker on getting him in line for the MLW Heavyweight title.  The Dragon checks with the fans to see if that is good for business, and they firmly scream back, “No!”  But Steamboat does set up a good match for Holliday as he will wrestle one on one with Matt Cross, and that is happening whether Holliday likes it or not.

Emilio Sparks is backstage with the new tag champs, EJ Nduka and Calvin Tankman, still celebrating their win over 5150 last week. Soon, the MLW Middleweight champion, Myron Reed comes out to offer congrats as he gets ready to defend his belt. The tag champs say he’s got it, so let’s head to the ring for a title match for the…

Once the bell rings it’s a great start with each man going hold for hold, but Reed can counter TJP’s offense at every turn.  TJP sticks his hand out to shake, but Reed offers a fist bump, and TJP accepts…before grabbing his arm and then clotheslines him out of his shoes.  From there, the match is all TJP as he whips his arm around the ring post, and the Fil-Am Flash veteran wears down the Young G.O.A.T.  Reed goes for a springboard cutter, and TJP grabs him midair in a triangle submission and then transitions to an arm breaker, further injuring Reed’s arm and shoulder.

TJP gets him in a surfboard, but can’t hold the submission and that leads to…

Ads (Groan!  Why is this ad placement necessary, I ask again to the Monkeys in the Truck [apologies for Chris Jericho])?!)

Back to the match, TJP is outside the ring, and Reed hits a suicide dive with some serious hang time.  He’s now on the attack and gets a guillotine leg drop on TJP.  TJP sends Reed to ropes for another clothesline, but he ducks and then kips up Matrix-like, and nails with a standing enzugiri. Reed goes for a neckbreaker, but TJP is ring savvy to deliver a backdrop to the ring apron, and he then follows with the Mamba Splash, but only gets a two count.

Reed goes for a splash that misses, and TJP counters with a Fujiwara armbar, but Reed manages to grab the bottom rope for the ref to make him break the submission.  TJP goes up top to deliver with a second Mamba splash, but Reed catches in a cutter mid-leap, and covers for the pin and the win.

Your Winner via Pinfall:  Myron Reed

The Young G.O.A.T leaves in triumph after another successful title defense.

The Von Erichs ( @MarshallVonEric @RossVonErich) earlier this past week were in Dallas and donated the World Class title to the University of Northern Texas.#MLWFusion pic.twitter.com/O97Ub5CYbV

That would be an interesting display piece to look over one day.

The Women’s Featherweight division is starting to ramp up for the title tourney, and next week will be Shazza McKenzie versus Holidead in action.

Per interim matchmaker Ricky Steamboat. NEXT WEEK there will be a BIG Women's Featherweight matchup as @holidead will go one on one against @Shazza_McKenzie. #MLWFusion pic.twitter.com/aS9gPi3M61

That promises to be a great matchup.

Speaking of matchups we didn’t expect, here is…

Right from the start, Holliday is displaying more of a vicious streak against “MDogg”, but Cross is able to come back on the attack with a cartwheel splash and a suicide dive to the outside of the ring. He gets Holliday back in the ring and goes for a pin, but only gets a two count.  Holliday clotheslines Cross inside out, and he proceeds to choke him on the bottom rope.  As the ref makes Holliday break off, Atout is nearby and adds insult to injury by slapping Cross while giving the finger to the fans (classy).  But Cross fires up, and goes for a succession of bicycle kicks and a crossbody to cover Holliday, but gets a two count.

Holliday goes for the 2008 finisher, but it’s reversed to the signature Springboard Cross cutter for another two count.  Cross goes high risk up top to attempt a 450 splash, but Holliday dodges and now gets the snap 2008 finisher to get the “W.”

Your Winner via Pinfall:  Richard Holliday

Bocchini tries to get a word, but the Interview Queen takes over to get a word with her “babe.” Holliday says the Dynasty was always about him, as he elicits massive boos from the crowd. Holliday tells Charlotte that The Clout Couple is MLW and it’s their show now

Again, I will say this for Holliday:  he knows how to channel the Power of Douchenozzlery™.

MLW puts a spotlight on “The Judge” EJ Nduka, and I’m honestly digging these behind-the-scenes looks on their roster.  I hope they continue on this path.

Inside look at the journey of "The Judge" @EjTheJudge.#MLWFusion pic.twitter.com/4wlZlvnS9t

Sparks stops Mr. Thomas and Alex Kane for a quote about a new member of the Bomaye Fight Club.  Kane tells him to stop the clickbait as they walk off.   It’s guys like Sparks that give guys like me a bad name (and I can tarnish my own reputation without trying, thank you very much).

It’s time for the Main Event, and it’s family fun and fighting with…

The Von Erichs (Ross and Marshall Von Erich) vs. Ricky and Kerry Morton

First off, two things are a little different:  not seeing Robert Gibson by the elder Morton’s side is different, and it’s definitely odd to see the Morton’s outside of the National Wrestling Alliance promotion (which I also cover, and check out NWA POWERRR and NWA USA if you can).

There is a good sign of sportsmanship, as handshakes abound between the tag teams.  Ross and Kerry start the match, and there are some nice amateur moves by the younger Morton. A flying crossbody by Kerry gets him a two-count.  But the Charlotte fans start chants of “Rock N Roll”, as Ricky gets tagged in and nails Ross with a running knee lift.  Ross fights off the Mortons and gets a big boot to Kerry in the corner.  Tag to Marshall, and he delivers a nice standing dropkick, but the younger Morton manages a roll-up for a two count, and Marshall answers back with a sliding clothesline.  The Von Erichs do some double team moves to Kerry in the form of a hip toss to a boot by Ross, but Ricky comes in to save his son, and the elder Morton nails an impressive Canadian…err, Southern Destroyer.

But Marshall sinks in with the Von Erich Iron Claw, then Ross gets in with the Iron Claw Slam on Ricky Morton to pin him for one, two, and three.

Your Winners via Pinfall:  The Von Erichs

Marshall keeps the claw on the elder Morton a little longer, and Kerry’s not happy that he’s taking liberties with his dad, and tempers start to flare, but then Dr. Julius Smokes comes from the back and talks down both tag teams in the ring.  Naturally, it’s a distraction for 5150 to come in to sneak attack both families, but both The Von Erichs and the Mortons fend off Rivera and Slice Boogie and send them packing. The show closes as both generations of Von Erichs and Morton raise their hands high in victory.

A solid show, and a nice cameo by Steamboat was a good crowd pleaser.  The main event between The Von Erichs and the Mortons was short, but good fun too.  Reed is definitely making a case a building the middleweight division around him a third time, and Holliday is a douche…but in a good way.