Impact: Revisiting the multiverse of matches 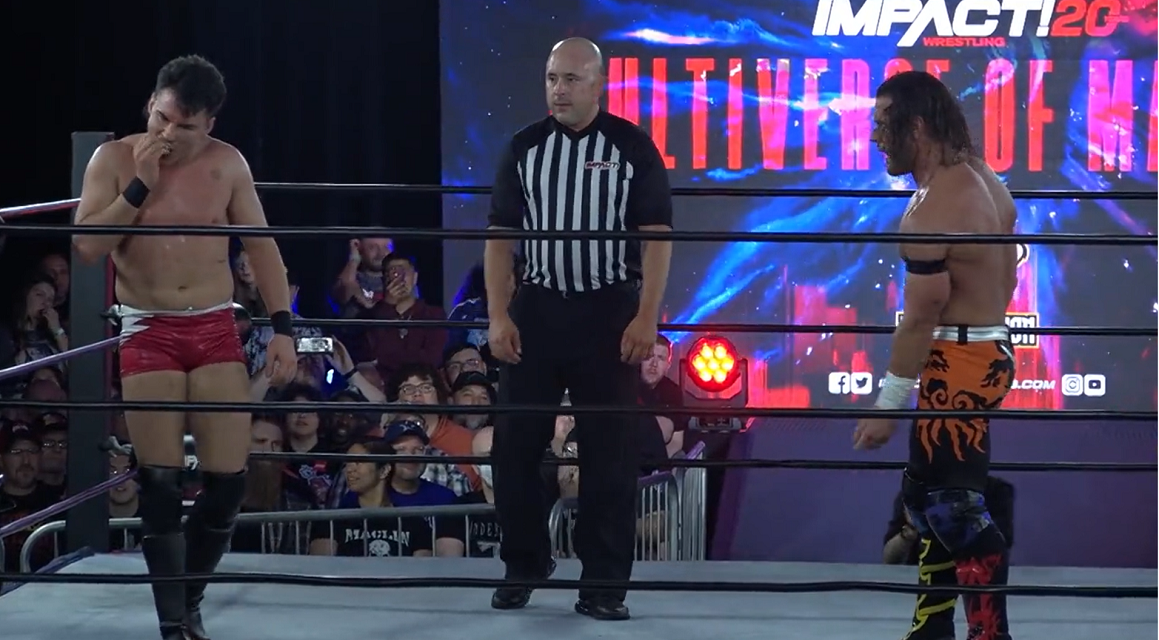 Greetings and salutations everyone and welcome to this weeks Impact TV report. This week Impact decided to revisit the Muiltiverse of Madness event from this past weekend. Without further ado, lets get to it.

Josh Matthews is the host of the show as he is at Skyway Studios in Nashville TN to look back at the Multiverse of Matches special.

This was your typical Ultimate X Match where it was a spot fest an everyone had their chance to shine. Blake hit a Canadian Destroyer on Bey. This gave Blake the opportunity and he dove off the top of the Ultimate X structure onto the men on the floor. Grace went for the belt, locking her legs around the rope but Miguel also locked his eyes on the belt and eventually beat her to it and pulled down the belt.

After the match, Miguel was interviewed and he hypes up the triple threat match he will have on Ocuntdown to Rebellion on April 23 at 7:30 EST against “Speedball” Mike Bailey and Ace Austin.

Aldis was able to get the hot tag after a while from James. Aldis hit a top-rope elbow drop on Cardona and got a very close pin. Chelsea accidentally slapped Cardona. Aldis applied the Cloverleaf on Cardona. At the same time,  Mickie locked on a Cloverleaf on Green also. The heels were tapping out at the same time to give Aldis and James the ever important win.

This match wsa a hard hitting affair. Eventually, Edwards hit a bunch of forearms in Ishii. Edwards followed this up with a Tiger Driver for an insanely close nearfall.

Ishii blocked the Boston Knee Party, and he hit his own Shiny Wizard. Ishii hit a basement clothesline and got another close 2-count. Edwards then hit a Boston Knee Party but this wasn’t enough as Ishii recovered and connected on an enzuigiri and a clotheslin.  Ishii then hit the brainbuster for the win!

Jonah hit a superkick on PCO. We then get the face-off that a lot of people are waiting for. Moose and Alexander are face to face. They squared off, and Josh hit a clothesline. Alexander locked in the ankle lock on Moose. He went for a Jay Driller, but Moose escaped and rolled all the way to the outside of the ring onto the floor. Back in the ring, Jonah speared PCO. Alexander hit the Jay Driller on PCO and went for the pin and scored the 3-count for the win!

Sabin hit a Tornado DDT from the corner for a close count. White quickly recovered and hit a Saito Suplex on Sabin. White hit a Flatliner and a German Suplex, then a spinning uranage/rock bottom for such a close call. Sabin hit a running Mafia Kick in the corner as he was not giving White any time to recover.

The match continued as a 50/50 affair and White got some super loud chops in. Sabin went for but couldn’t finish the Cradle Shock. White went for the Blade Runner, but Sabin escaped, got an inside cradle and was able to finally hand White his first loss since coming to Impact.

After the match, Steve Maclin ran in and attacked Sabin. White watched for a second, but then he hit a low blow on Maclin and left. Maclin is keeping his promise of ending other members of team Impact that lost to Honor No More.

Sabin gives an exclusive interview where he says that Jay White will never forget the day he lost to the underdog!

Of note, the announcers were playing up the fact that The Briscoes are coming straight from a classic match with FTR so thry are not at 100%. Mark made the hot tag and beat up both Good Brothers. Mark hit the Iconoclasm flip slam on Karl for a close call. The Briscoes hit their team neckbreaker but this was not enough to end the match.

Karl hit a big spinebuster on Jay. Gallows hit a splash in the corner. The Good Brothers hit a team neckbreaker on Jay for a very close pin. All four fought in the ring and all collapsed. Suddenly, Jay White appeared and pushed Jay Briscoe off the top turnbuckle. The Good Brothers immediately hit Magic Killer for the win!

It was then announced that The Briscoes return to IMPACT Wrestling on Sunday, April 24th in Poughkeepsie, NY. Tickets are on-sale now!

Faby hit a suplex and a legdrop, then a basement dropkick to the face but that was not enough to win both belts. Faby hit an X-Factor faceplant but was only good enough for a 2-count. Both women hit simultaneous Mafia Kicks and were both down. After getting up, Deonna applied an armbreaker and this was enough to make Faby tap out.

Purrazo got on the mic and called Mercedes Martinez a paper champion. Music hit and it was Taya Valkyrie making her triumphant return. Taya challenged Deonna to a match at Rebellion.

In what many people were calling a match of the weekend, Shelley hit a brainbuster on the floor outside of the ring. The ref started counting as Shelley made his way into the ring. Bailey barely got in before the 10 count. Bailey hit a springboard moonsault on Shelley, and the crowd popped.

Back in the ring, Bailey hit his 450 kneedrop to the ribs. Bailey missed a top-rope 450 kneedrop and Shelley hit a hard kick to the back of the head. Bailey bounced back after a bit of time of being groggy but Shelley was caught off guard as Bailey hooked on an inside cradle for the HUGE win.

While the matches were still entertaining, it was quite dissapointing to have a Multiverse of Matches recap show. If you didn’t watch the show last Friday then this show was perfect for you. However, if you did watch this show last weekend then this show was a write-off. That said, being able to watch Mike Bailey and Alex Shelley again was a fun gift for free TV.