Jerry Jarrett’s autobiography, The Best of Times, came out in 2011, but some of its gems are still a treasure today. 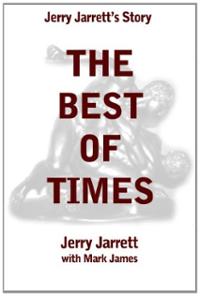 Like this one on WCW: “At the time it closed the company, WCW had about $125 million income stream and had lost about $60 million. Without much effort, I was able to strike $85 million from the cost side. I called my partner and told him that we could take over, not increase income and make $25 million the first year!”

The Best of Times: The Jerry Jarrett Story, was written with renowned Memphis historian Mark James and published by James through Amazon’s CreateSpace system. James does make note of what it is like to work with Jarrett: “If I had a quarter of the defeats that Jerry Jarrett has suffered in his life I don’t know how I’d be able to keep that positive attitude he has. Jerry’s so positive and always moving forward, it’s somewhere between Gandhi and Jimmy Hart.”Jerry Jarrett was involved with all the major wrestling promotions of our time at one point or another. He was a member with his Memphis wrestling group of the National Wrestling Alliance, he was a consultant for both the WWF and WCW, started TNA with his son Jeff, bought the remains of World Class Championship Wrestling in Texas. Jarrett also almost bought the American Wrestling Association from Verne Gagne — however, Gagne backed out to keep the company for his son Greg. “Blessings sometime are in what you don’t get instead of what you get,” wrote Jarrett.

These are wise words indeed from a man who started promoting spot shows at the tender age of 14. My son is 13 and he’s still playing with his action figures and only dreaming about entering the wrestling business. That fact was simply amazing to me, as I got started in the business as a booker and a promoter locally here in Montreal in 1993 in my early twenties. I know things were different back in the 1950’s, but promoting wrestling successfully is very hard even for an adult today. This was very impressive, even coming from a wrestling genius like Jerry Jarrett and gave the tone to the whole story. “It was the best of times. It was a time filled with hope and optimism. It was a time when all things were possible. It was a time when a young person could dream about riches and fame or flying to the moon. It was a great time to be a teenager.”

The only bad thing I can really say about the book is that it might not be for the regular wrestling fan. Simply put, this book should be read by every promoter, wrestler and booker out there — including the people still working for TNA. There is just so much insight into the wrestling business that people should try to assimilate this knowledge that only a lifetime in the business can procure. This is where the regular fan might be a little bit at a lost. It is much more about the business itself and the strain it can put on your life and family, especially after his Memphis Wrestling years than it is a wrestling book with fun and cute stories and a great ending.

The ending, describing his broken relationship with his son Jeff is really sad and heartbreaking. “When Jeff told me back in late 2005 that we needed some time apart, I didn’t realize that he meant forever. We have not spoken to each other since that day.” 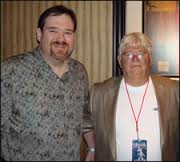 Each chapter stands on its own and one could easily read the book in the order of your choosing. It is a blessing, for people with a deeper knowledge of the wrestling business as all the information is there for us to consume. That might not be the case for someone who would want to read about the career of Jerry Jarrett, the wrestler, who enjoyed a lengthy run as a Memphis wrestling star, because that was a very small part of his involvement in wrestling. The linear part of his story gets tangled up a little along the way, as he will sometime jump ahead or go back depending of his souvenirs or of the story is trying to tell. Therefore, this book might not be everyone’s cup of tea and reads much more like if we are reading his personal journal than a regular autobiography.

I met Jerry Jarrett last August at the Mid-Atlantic Legends reunion and he told us something that rang true to me when he said it then and even more today after finishing his life story: “What unifies everyone in wrestling is that we are all wealthy in memories.” I don’t think anyone ever put it quite that nicely before.

The book can be order through the Amazon.com website and you can learn a lot more from Mark James and Memphis Wrestling at memphiswrestlinghistory.com.