Thanks to the vision of legendary promoter Sam Muchnick, St. Louis was one of pro wrestling’s major hotbeds during the 1960s and ’70s. Those glory years are chronicled in a new book written by Muchnick’s right-hand man during that period, Larry Matysik. 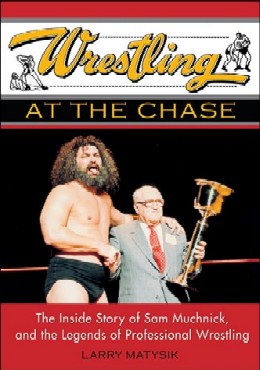 Wrestling at the Chase: The Inside Story of Sam Muchnick and the Legends of Professional Wrestling, recently published by Toronto’s ECW Press, is a fascinating account of how Muchnick, using the simple formula of honesty and integrity, took St. Louis to the top of the territorial heap.

Starting off as a sports writer, Muchnick literally fell into wrestling in the 1930s. By the early ’40s, he had become one of the sport’s major power players, forming and taking on the Presidency of the National Wrestling Alliance, a consortium of territories across the United States. In 1959, he launched Wrestling at the Chase, named after the Chase Hotel where the matches were held, a TV show which went on to air for over twenty years.

That longevity was no accident according to Matysik, but rather a result of Muchnick’s respect for and dedication to the fans, and his determination to give them the best wrestling product he could offer. To that end, to call Sam a traditionalist is very much an understatement. Matysik details the lessons he learned from Sam about how to make programming exciting, entertaining, and must-see: putting together matches people wanted to see, keeping the focus on the championship versus the champion, and not swerving the fans with false finishes, among them.

Matysik notes that those principles governed all of Sam’s dealings, including those with wrestlers, suppliers, partners, friends, and family. Stories are recounted which highlight Sam painstakingly going through the books to make sure wrestlers’ payoffs were paid out to the penny. Matysik tells how, as the writer for the company’s newsletter, he would often have to print up special editions — at the company’s expense — to tell subscribers in advance about a last-minute card change, rather than waiting for the show to start and risk being accused of pulling a bait-and-switch. Those kinds of stories are rarely heard of in the wrestling game, but there are plenty of them in the book.

But the book doesn’t just focus solely on Sam Muchnick. True to the title, many of the other legends of the day are paid tribute as well. Modern historians will relish the sections devoted to the Von Erichs, Dick Murdoch, and Andre the Giant among them. Younger fans will be interested in reading about the days when Jesse Ventura, Randy Savage, and Roddy Piper were cutting their teeth in the game. Some classic photos from the era are included as well, including some of “youngsters” like Terry Funk, Ric Flair, and Jack Brisco.

Yet another chapter is devoted to Bruiser Brody, which is also interesting reading. Many people have only heard of the man’s tragic end, but Matysik instead pays tribute to the life of his friend. It wouldn’t be at all surprising to see Matysik follow this book up with a biography about Bruiser, and I daresay that would be a solid read as well, if Wrestling at the Chase is any indication. The last section of the book talks about Matysik’s career after Muchnick’s retirement in 1982. Larry took over the promotion and then ran into the juggernaut known as Vince McMahon. McMahon’s goal was to take wrestling to a national level, and in his fervor to do so, the territories were systematically wiped out. St. Louis was no exception, and soon thereafter, Matysik found himself working for Vince in the WWF, where he spent ten years. Though he doesn’t explicitly say it, there’s an undercurrent of dislike in his comments about McMahon and his time with the Fed. He notes that Sam’s concepts of playing it straight with the fans and focusing on the in-ring aspect over the storylines was not necessarily the way things were done in the WWF, and, as a result, wrestling in St. Louis, as he knew it, was gone. Telling is the quote that Matysik attributes to McMahon: “Wrestling is a rotten business with rotten people, and the only way you succeed is to be more rotten than the other guy.” It’s evident that in Matysik’s eyes, given his experience working with Muchnick, that he doesn’t agree.

Overall, Wrestling at the Chase is a fond look at the yesteryear of wrestling, and at the life of the man who played an instrumental role in the industry’s success during that time. Filled with many nostalgic memories of how the business used to be (some would argue, still should be) run, hardcore fans will find this an essential addition to their library. And even casual fans will find the story of Muchnick and the St. Louis wrestling scene to be an interesting read.