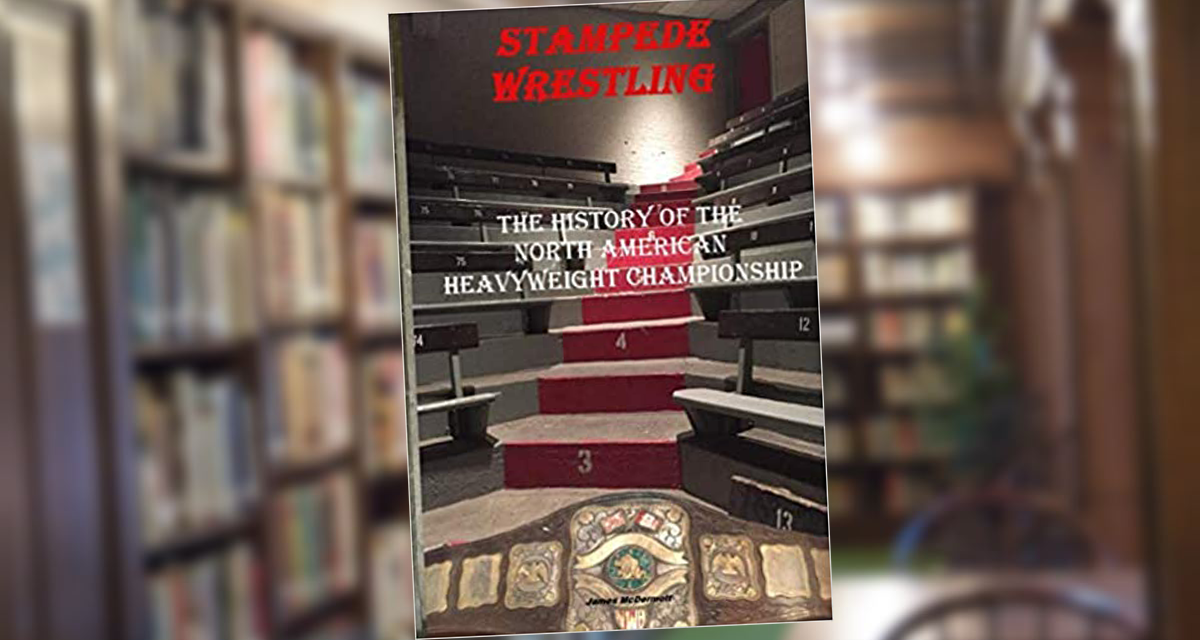 A true wrestling fan’s labour of love is the best way to describe the book Stampede Wrestling: The History Of The North American Heavyweight Championship by James McDermott, which is out now and self-published. 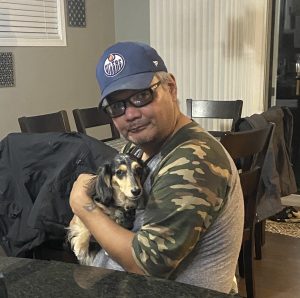 By tracing the lineage of the top heavyweights crowned in the Calgary territory from 1946 to 1989 (and beyond), McDermott has done real justice to the feuds, personalities and peculiarities that forged the legend of Stu Hart’s circuit as it transitioned from Klondike to Stampede. Whether it was with the North American title or the Canadian Heavyweight title it replaced (and was replaced again during a mysterious belt disappearance), the champs are all accounted for, even if the exact dates of title victories or defeats is typically for the territorial era, occasionally muddled or fudged.

Countless hours were spent by McDermott to get personal stories from the vets who traveled the roads, spilled their blood and heard the cheers and boos across the territory. The first-time author started going to live cards in Edmonton as a child from the wrong side of the tracks, and praises the promotion for personal reasons – by focusing on earning money to be able to go to the weekly events, he says it kept him on the straight and narrow.

It should be explained at the outset that the book is not slickly written, and the original edition had a few editing errors that the author assures are rectified in future printings. In no way should this detract from the enjoyment of reading so many interesting tales of the past about the Hart family, announcer Ed Whelan, and tale-end Stampede titlists like Owen Hart and “Lethal” Larry Cameron. As McDermott wrote, “every single wrestler that has held the North American title did their part to help build its rich legacy.” 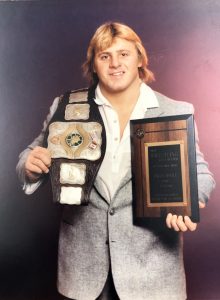 Owen Hart with the North American heavyweight championship and the Pro Wrestling Illustrated (PWI) Rookie of the Year plaque for 1987. All story photos contributed by James McDermott.

The history of the actual title belts, the various cosmetic changes, additions, thefts and recoveries of them that resulted in Stu Hart having to switch his top prize around – is a bizarre and unexpected lesson in detective work. The photo of the main plate of the North American strap – now on display at the Glenbow Museum in Calgary – shows it was a National Wrestling Alliance (NWA) branded belt, with side plates listing world title claimants starting in 1884.

The territory gave many wrestlers including Canadian regional performers, a chance to shine. That started with the Canadian title, which McDermott called an “underrated championship” in wrestling lore. It was known as the Dominion title when Al Mills defeated Whipper Billy Watson in 1946 and by the time Mills lost it five years later it became the Western Canadian title. Mills’ repeated reigns were surpassed only by those of Dave Ruhl, who became the dominant local hero until the early ’70s. As a reflection of Stu’s booking practices of wanting the best shooters around, the careers of both George Gordienko and Luthor Lindsay, his favorites in the for-realsies class, form part of the narrative.

In 1968 a new title, the North American title, was introduced but when it disappeared in 1970, the Canadian title was swiftly revived into service at the top of the cards. In this era, the legend of Archie “The Stomper” Gouldie began to build, with international star Billy Robinson, madman Abdullah the Butcher, longtime attraction Sweet Daddy Siki and Canadian Football League (CFL) star Angelo Mosca in the mix.  When the ultra-popular Dan Kroffat introduced the ladder match in his rivalry with Tor Kamata, it helped define the wild anything-goes action the promotion was famous for, and influenced future generations of wrestlers to the present day.

In the promotion’s heyday, the North American champion was in line for a world title crack during the annual Calgary Stampede week. That was the cause of conflicts between the Stampede stars wanting the big paydays associated with facing names like Dory Funk, Harley Race and Nick Bockwinkel. The championship campaigns of future World Wrestling Federation (WWF, now World Wrestling Entertainment, WWE) stars are detailed through painstaking research, often illustrated with classic Body Press event program photos and stories. The list includes Stan Stasiak, Sylvester “Junkyard Dog” Ritter, Jake Roberts, Bad News Allan, Bret Hart, Dynamite Kid, all the way through Davey Boy Smith and Mahkan Singh towards the closing out of the original Stampede era. 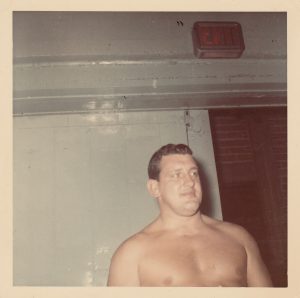 According to McDermott, this is a never before seen photo of a young Billy Robinson from Edmonton’s Sales Pavilion in early 1970. Picture courtesy of Shelly Paulson.

The North American title also went on the road outside Hart’s promotion in Eastern Canada, firstly with Gouldie to the Maritimes in the ’70s, from which the belt never returned. But, unknown to the author, the title was also defended in Winnipeg and on a lap throughout Manitoba, about two weeks before the last North American title defenses in the east he could locate. I know because I was the TV play by play guy.

The beloved Leo Burke utilized his North American title on Maple Leaf Wrestling when the Carolina-based Crockett promotions began supplying the talent to the Toronto NWA office in the ’80s. In April 1984, New Brand Wrestling flew Burke and top contender Johnny Weaver in, not because it was going to draw in the big city – Winnipeg – but instead, in the rest of the region where primitive forms of community distributed satellite TV had taken hold. In places like Flin Flon, The Pas and Thompson, CHCH was on in those communities and Burke’s matches against Weaver drew crowds of 700 plus people, which in the wrestling business, no one outside of the area really was able to understand.

Personally I was deeply interested in the insights into locker rooms and the careers of the journeymen, such as the previously unexplained popularity of Mr. Hito, the first simultaneous singles and tag team champion, Gil Hayes, and of my dear friend Kerry Brown, who McDermott clearly was fond of and who is pictured three times in the book. Another fascinating feature is photos of wrestlers wearing the championship in promotional photos despite never actually winning it in the ring.

The book also takes care to follow the later legacy of the North American title which was defended in the revived Stampede promotion through 2008, and the creation of the Hart Heritage title by Stu’s grandson, Harry Smith, a fine modern tribute to the legacy of the region’s top prizes. An insightful discussion with old-timers and modern day performers about who they think was the greatest champion really caps off a fantastic reading experience about the heyday of Canadian wrestling on the prairies. Or, as McDermott says at the end, “Thank you, Stu.” 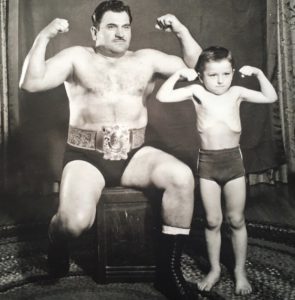