Stampede book gets back in the saddle

The history of Stampede Wrestling is full of colourful personalities and has produced some of the greatest talent that sports entertainment has ever seen. Back in 2005, Calgary journalist Heath McCoy released the now-acclaimed book Pain and Passion. This collection of stories has been widely considered as the most in depth coverage of the territory; mainly because of McCoy’s tireless efforts of speaking with Stampede’s major players. 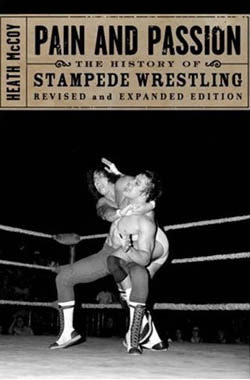 Fast-forward to 2007 and some significant events have occurred to several key Stampede alumni members. This is why when ECW Press published the second edition of Pain and Passion: The History of Stampede Wrestling, McCoy added a special 24-page bonus chapter. “There was so much that occurred to the Harts since 2005, including Bret’s mending of fences with his long-time enemy Vince McMahon and the subsequent induction in the WWE Hall of Fame,” says McCoy.

However, the revised and expanded version of the book almost never came to pass. The previous publisher, Canwest, decided to get out of the book business and had not provided the widespread distribution that Pain and Passion deserved. “I wasn’t willing to give up… I knew their was still plenty of interest out there about the Stampede Wrestling story, both in Canada and in a number of markets which hadn’t previously been reached,” remembers McCoy.

That is when ECW Press, a well-known publisher of pro wrestling books, stepped in. Senior Editor Michael Holmes worked with McCoy to revise the original piece and get it ready for a re-launch into bookstores across Canada and the United States. “ECW had done so many wrestling books that it seemed like a natural fit … the book was never properly sold into the U.S., and I really believe it deserved to be out there, that Stampede’s history would interest a wider market,” says Holmes. To date the story is selling very well in both countries.

Outside of The Hitman’s Hall of Fame ceremony, two main stories have emerged from past Stampede graduates. The events evoke feelings on opposite ends of the spectrum. The first is World Wrestling Entertainment’s signings of Stu Hart’s grandchildren, which provides hope and exciting options for the third generation wrestlers. The second is arguably the darkest day in professional wrestling history.

Beginning with the grandchildren, it appears (at least before the release of Teddy Hart), that the WWE has the most intriguing angle possibilities that they have had in years. “There’s a new generation of Harts, including Nattie Neidhart (daughter of Jim the Anvil), Harry Smith (son of British Bulldog Davey Boy Smith) and, of course, Stu’s volatile, daredevil grandson Teddy Hart, an infamous name on the indie scene,” recaps McCoy. However, the debut of the new Hart Foundation, or whichever way they appear, has been continuously put on hold.Harry Smith has been on the WWE payroll for over a year and a half already, and has just recently made an uneventful debut on the RAW roster — and was just suspended for a Wellness Policy infraction. Nattie Neidhart, and her boyfriend TJ Wilson, who is an honorary Hart, were both signed back in January with no set date for either of them to appear on one of the weekly television programs. A possible Survivor Series storyline for the 10-year anniversary of the Montreal screw job involving all the new Harts seemed to be in the works, however, Teddy Hart’s surprise release appears to have stopped that idea from developing any further.

“There’s definitely plans afoot to launch a Third Generation Hart Foundation angle, but you have to wonder sometimes if it’s ever going to happen … the angle seems to get put on the back burner — usually in favour of the same old nonsense,” says McCoy. “This baffles me because all four of the new generation Harts are very promising, and I think they could really provide a breath of fresh air in the WWE. It may be that some of them lack the mic skills, which are a necessity; but Teddy’s got enough crazy charisma to fire up any crowd and Nattie is talented in this respect too.” Fans can only hope that the WWE does not waste their talents.

The bonus material then moves onto covering the Chris Benoit tragedy of June 23-25, 2007. The murder suicide of Chris, Nancy, and Daniel Benoit has been well documented already, however, McCoy is able to not only recap the terrible events, but also provide some additional little known information. SLAM! Wrestling asked McCoy if it was difficult to write about one of Stampede’s most cherished stars. “Yes, in that it’s a horrific story any way you look at it. This was a man that I, like the entire wrestling community, very much admired. Not only was Benoit a truly amazing pro wrestler, but also appeared to be a great family man behind the scenes.”

After coming to terms with what happened he had no ethical issues or difficulty in writing about it. In fact, as a journalist, and lead historian of Stampede Wrestling, McCoy felt it was his responsibility to report on the events. “This is the biggest tragedy and public scandal in wrestling history, surpassing even Owen Hart’s death of 1999,” he says. “For a serious wrestling journalist to not tackle it honestly is completely cowardly and irresponsible.”McCoy collaborated with SLAM! Wrestling’s own Greg Oliver and Steven Johnson, and fellow ECW Press author Irvin Muchnick, to compile the book, Benoit: Wrestling with the Horror that Destroyed a Family and Crippled a Sport, now available in bookstores and online. McCoy dismisses talk of capitalizing on the tragedy. “Anybody who reads Pain and Passion or the Benoit book will see that the case has been reported on professionally and respectfully.”

Outside of the new Benoit piece, what other projects are in the works for the Calgary Herald‘s rock music and pop culture critic? “I’ve got at least one more book on the back burner, which isn’t about wrestling … If the Stampede Wrestling one continues to do well, you never know … there are many more Stampede tales left to tell.”

McCoy finishes off by saying that despite the exhausting effort of handling two book releases his top priority now lays elsewhere. “For the time being, my number one project is helping my wife with our beautiful new baby girl.”