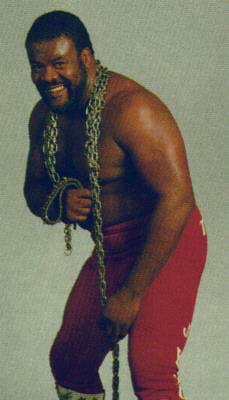 Sylvester Ritter, known to pro wrestling fans as the “Junkyard Dog”, was killed Tuesday in a car accident. He was 45. Ritter, from Charlotte, N.C., was killed about 11:40 a.m. on Interstate 20 in central Mississippi.

The Highway Patrol refused to give any other details.

As the nearly 300-pound “Junkyard Dog”, Ritter was almost never without his trademark dog collar around his neck. The collar also had a large chain attached to it.

JYD was known for his trademark head butts and his finishing move “The Thump” (the two words also stitched across the back of his trunks), a crushing powerslam.

His contemporaries in the ring during his WWF tenure included Hulk Hogan, Jesse Ventura, Roddy Piper, Randy Savage and Nikolai Volkoff. WWF fans will remember Ritter’s feuds with Terry Funk and his brother Dory, Harley “The King” Race and a host of other superstars.

In his formative years, Ritter learned his trade at the Dungeon (the Hart family wrestling school) and “graduated” to compete actively in Stampede Wrestling as Big Daddy Ritter before adopting the JYD persona.

Ritter claimed he earned his nickname while working in an auto junk yard.

During his carrer as a babyface, JYD held the Mid-South Wrestling Association North American heavyweight title on four separate occasions taking on the likes of Ted Dibiase and Butch Reed.

Ritter, who has had a low-profile since the ’80s wrestling boom recently resurfaced in the news after a backstage altercation with another wrestler at an ECW show.

– with files from Canoe wire services