The ECCW champ Mr. Gillis has pressure both on the job and in the ring.

Before ever starting in pro wrestling, he worked — and continues to work — as a pressure welder.

But it’s in the ring that he deals the most punishment.

“I’m a hard-hitter. I like power moves,” he explained to SLAM! Wrestling down the line from Vancouver.

“I’m not a tall man. I look fairly intimidating because I’m about as wide as I am tall. So, in the ring, I move quite quick for my stature. So I move fast and I hit hard. When I clothesline someone, they know they’ve been clotheslined.” 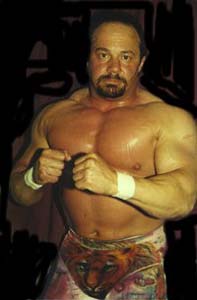 He’s been wrestling since 1985, off and on with regular work on construction sites.

The Mr. Gillis gimmick is a good fit for the extreme-style wrestling in the NWA-affiliate ECCW, which runs shows in the Pacific Northwest.

“My ring persona kind of demands authority, so it’s Mr. Gillis,” he said — with authority of course.

He’s a fanatic bodybuilder, and works out as much as he can.

“I’ve loved bodybuilding for twenty years. It’s been a passion. It’s been like my religion. It’s basically what’s kept me sane through the turmoils of life,” alluding to his ex-wife and two children who live in Regina.

Besides B.C. and the Pacific Northwest, he has spent time in Mexico as Mr. Atlas, Puerto Rico as The Lion, Missouri as Greg Montana, and Germany, Tennessee and Florida.

He was trained by the likes of Leo Burke, Ron Ritchie, Ron Starr, Bulldog Bob Brown and Stomping Paul Pellering in and around Calgary.

It was Bulldog Brown that had the most impact on him.

“We became good friends. I stayed with him. I did a stint in Kansas City, and he put me up. I was young, in my early twenties, and pretty green actually to the business. He sort of took me under his wing and he did some good things for me, which I appreciated. I did stay in touch with him fairly constantly until his passing.”

Up next for Gillis is a shot at the NWA Canadian title at the 50th anniversary NWA show on October 24th. In that match, he faces two other representatives from the Canadian promotions — E.Z. Ryder from the Winnipeg-based CWF and Slater Jeffries from the Sarnia, Ontario-based Maple Leaf Wrestling.

But when SLAM! Wrestling talked to him, he had just gotten off the phone with a friend in ECW, and is hoping to land there in the near future.

“I believe they’re going to do some good things in the next couple of years, so I’d like to be a part of it,” Gillis said.

But are you hardcore enough?

“Yeah, I believe so. Probably, I guess, if you call splashing people off a cage through a table hardcore…”

Apparently the style of that Extreme promotion from the East Coast has caught on way over on the West Coast.

I was in the ECCW Arena the night Mr. Gillis dove off the top of the cage driving his opponent through that table and winning the ECCW Heavyweight Belt. It was an amazing move when you consider the size of Mr. Gillis. ECCW is a great promotion and if you ever get a chance to see it, do it!!
Ryan, lynnelee