Angelo “King Kong” Mosca just passed the 50th anniversary of his arrival in Canada. Of course, to many denizens of the Great White North, the native of Waltham, Mass., is as Canadian as three-down football and maple syrup.

During a recent conversation from his home near Niagara-On-The-Lake, Mosca reflected on a number of subjects, including his early days in Canada, his beginnings in wrestling, and some of the important moments in his life.

As a teen football star, the 6-foot-5, 265-pound Mosca was heavily sought after by colleges. He went to the University of Notre Dame on a scholarship, but was kicked out for bookmaking, something that he said he had learned from his father. Next, he went to Wyoming, but was booted out for theft. His reputation didn’t scare off the pro scouts. He was drafted by the Philadelphia Eagles and the Ti-Cats, and went to Hamilton in 1958 after he graduated from Notre Dame with a degree in business administration. 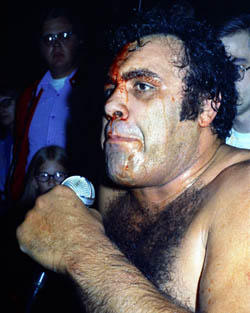 Angelo Mosca talks to the fans, circa 1972. Photo courtesy of the Wrestling Revue Archives

“When I came here, the money was better here,” Mosca told SLAM! Wrestling. “It was a different time. Also, the bonus money was a lot better. The only thing I knew about Canada was that the Maple Leafs and Canadiens came to the Boston Garden to play hockey. That’s all I knew about Canada.”

Mosca would go on to become a Canadian Football League Hall of Fame defensive lineman (Class of 1987), terrorizing CFL foes for 15 seasons, most of them with the Hamilton Tiger-Cats, but also lining up with Ottawa and Montreal. At the Grey Cup game in 2006, Mosca was named one of the CFL’s 50 greatest all-time players, even after emcee Bob Irving called him “as menacing a character as ever played in the Canadian Football League.”

But the funny thing is that Mosca actually started wrestling as a pro in 1959, well before many people knew of him from the CFL. It was Montreal wrestling promoter Eddie Quinn who suggested that Mosca consider the squared circle.

“He was from Boston, but he was a taxi cab driver,” Mosca recalled of Quinn. “I was a high school All-American. I was in St. Louis’ Sporting News, and got a scholarship to Notre Dame. He knew my whole background. So I come to Canada in 1958, and he calls me up in 1959. He says, ‘Why don’t you try professional wrestling? You’re making a name for yourself in football.'”

Eddy Auger, uncle of Johnny and Jacques Rougeau Sr., was his primary trainer, but others like Gino Brito and Duncan McTavish (who taught him to blade) helped out as well. Mosca’s first match was in 1959, against Angelo Savoldi. Fast forward to 2004, and Mosca is speaking at a Pro Wrestling Hall of Fame dinner at Ilio DiPaolo’s restaurant in Blasdell, NY, with Savoldi in the crowd. Mosca was stunned the veteran was still around. “I thought I had killed him then.”

Brito remembered an early match with Mosca in Granby, Quebec. “We were supposed to do a five, six-minute match. We went about 30 minutes. He was hard to work with,” Brito explained. “He was a big bastard. You came out of the ring, you were drained out completely. He could tell the guy had been in sports before. He knew timing and playing to the crowd too.”

Befriending Bulldog Brower led to a tour of Stampede Wrestling, which was really where he learned to work night after night, figuring out many of the secrets of getting a crowd riled up. He teamed ofter with another newcomer, Wayne Coleman, who would go on to become Superstar Billy Graham. 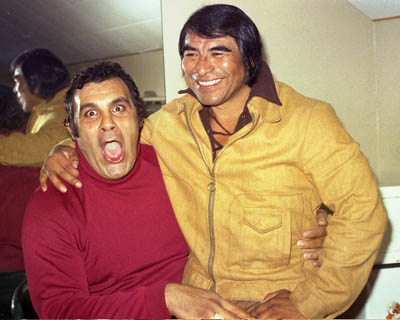 “Roy Shire was one of the smartest promoters I’ve ever worked for. He was a very intelligent guy, he knew how to show you the science of the thing. Lucky I had, Ray Stevens was there and Pat Patterson. What guys to learn from. They were two of the best workers I ever worked with in the business,” Mosca said. “That’s what I prided myself in, was the art of the business.”

Through all this off-season wrestling, Mosca continued to play football, of course. His crowning achievement, or at least his most notorious moment, was during the 1963 Grey Cup game in Vancouver, when he flattened Lions star Willie Fleming just before half-time, sealing his reputation and helping the Ti-Cats hoist the Cup. He was the dirtiest player in the CFL, according to the headlines, and he did nothing to downplay the accusation.

When he ended his football career in 1972 — with four Grey Cup rings — Mosca hit the road as a wrestler, eventually earning a reputation as a big of a loner. But there was a reason for that, he said.

“See, I came from a business where it was a team business. Wrestling is an individual business,” he said. “A lot of guys were never athletes; you didn’t have to be an athlete to be a professional wrestler. A lot of those guys were just guys who did their own thing. Then I learned eventually to travel alone, that way no stories get back to the office. A lot of guys, that’s their talent, how they can ahead, to tell a story about another guy. I had no time for that. I never was a stooge, and I worked as a team player.”

To Mosca, it didn’t take a business degree to recognize the important facts. Take promoter Verne Gagne and the American Wrestling Association, for example. “See, Verne liked athletes, and Verne was a hell of a wrestler,” complimented Mosca, launching into a story. “I”ll never forget the night I wrestled him in Denver, Colorado. The referee says to me, ‘Boy, you made that old man look good.’ I said, ‘That old man signs my f—ing cheques!'”

But it was a tragic accident in 1976 — the Wilmington, N.C., plane crash that broke Ric Flair’s back, hospitalized Tim “Mr. Wrestling” Woods, ended the careers of Johnny Valentine and Bob Bruggers, and took the life of the pilot — that shot Mosca into another realm in the business, from someone who was a footballer-turned-wrestler to a real “King Kong” that could truly dominate.

“I was ready to quit the business. I was in Hawaii. I got a call from [booker] George Scott saying, ‘We’d like you to come into Charlotte.’ I went, ‘I’m in Hawaii vacationing. I’ll call you when I get back.’ Now I don’t know that Flair’s gone down in a plane,” said Mosca. “About two days later, a call comes in again. I’m going, ‘What the f—? They must want me real bad. Since when does a promoter want you?'”

Scott pushed Blackjack Mulligan and Mosca to the moon, and “we carried the territory for about a year and a half, and I never looked back,” said Mosca. “Timing was everything, and I was in the right place at the right time. I did really well with it.” 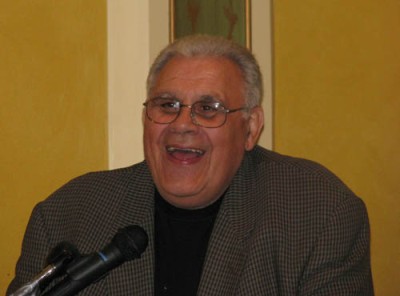 Angelo Mosca addresses the crowd at Night of the Tough Guys at Ilio DiPaolo’s restaurant in March. Photo by Greg Oliver

Fans around southern Ontario knew Mosca as a key figure in the chase for the Canadian title, battling the likes of Ivan Koloff and Hossein Arab (the Iron Sheik) at Maple Leaf Gardens. Mosca would team with his son, Angelo Jr., as well in the 1980s.

“My son’s a good guy, but he was never cut out for the business,” said papa Mosca. “He liked the money. I used to get him up early in the morning to go to the gym to train and stuff. He’d say, ‘Dad, do we have to do this?’ I’d say, ‘The good-looking hooker makes the money.’ That’s the way I took the business. We were whores. I was a big guy. I had a fair physique on me, and I took care of myself. My son, I don’t know if he really wanted to pay that price.” Mosca Jr. just turned 49 years old, and works in the Hamilton penal system, mostly with young offenders.

Attempts to promote wrestling under the MoscaMania and Pro Wrestling Canada banners were less successful for Mosca, despite the very publicness of his person after success in football, wrestling and dabbling in movies and television.

“I can’t help that. That’s who I am, my persona is public anyway. I enjoy the public. A guy named Joe Marconi once said to me, ‘Just remember, your face is your money.’ I’ve always remembered that. To this day, I’m probably one of the best-known faces in this country,” he said.

Mosca is still a regular at Hamilton Tiger-Cat football games, and is thrilled to be a part of the team behind the scenes as well. “Scott Mitchell is the president, and the minute he became president he brought me on board. I’m having more fun with that young group of kids and people in that office, it’s just wonderful.”

On Saturday, September 27th, Mosca will be out to Titans in Toronto III, a fundraising dinner for the Pro Wrestling Hall of Fame in Amsterdam, NY. It is a chance to give back and to revisit some old friends.

He is happy to be able to do it. “My health is not too bad. I had both my knees done, and my one hip. But what happened is they gave me an epidural and f—ed up a disc in my back. Hey, I’m not sick, that’s the way I look at it.”

Greg Oliver first met Angelo Mosca and Milt Avruskin of Pro Wrestling Canada at a Casey’s restaurant in Kitchener, Ontario, way back in 1986 or so. He is still intimidated by Big Ang.