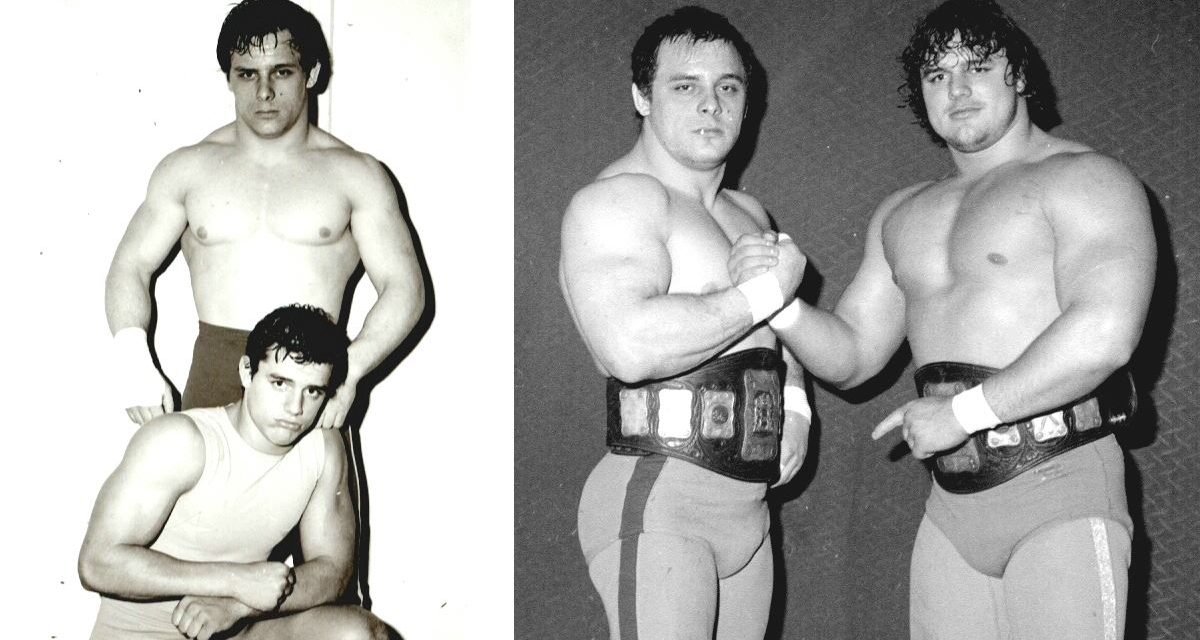 The original “Five Star”, this British Bulldog was a head above the rest of the class when it came to the diving headbutt. These archives go over his career from New Japan and All-Japan to Stampede and finally the World Wrestling Federation.

In the 80s, The Bulldogs were coming to Montreal, Quebec every month with the WWF. My friends and I found out which hotel the wrestlers stayed at so we went and got to meet the Bulldogs with Mathilda (their Bulldog mascot). We offered to walk her and they surprisingly allowed us given our prepubescent ages. We were just about to return this big dog when she sat down and refused to budge. We were panicking. I volunteered to knock on the door of the Bulldogs’ room and they both came out although they had separate rooms. Dynamite was topless and Davey in a World Gym T-shirt. Given Davey had more clothes on, he came down and swiftly scooped up Mathilda under his arm much to our awe. We returned up to the rooms and to show their appreciation, we all received photos with both Bulldogs inside their hotel rooms with their ring uniforms and Dynamite still topless. What a great memory for any fan!
Harris Black, Montreal

I used to watch the Kid wrestle every Saturday afternoon on TV in England .His name was well chosen. His suplexes were just electric, not even Bret Hart could match him move for move, he is definitely the greatest!
Nikk

I cannot think of another wrestler who was as fluid as The Dynamite Kid in the ring, his snap suplexes were without a doubt in the best in the business. What he lacked in physical stature he made up for in pure athletic ability. I remember the classic feuds they had with the Hart Foundation, Demolition, Islanders, The Dream Team & The Killer Bees. They were without a doubt the greatest tag team I have ever seen. The only thing I wish was they would have turned heels at some point in their WWF tenure, sadly we never had the opportunity as Dynamite injured his back to badly to to continue his career. Dynamite was ahead of his time, he did however make a lasting impression on the true wrestling fans.
Terry Harris

Bravo… A true Canadian Wrestling Hall of Famer. When I am old and grey, My grandchildren will ask me about wrestlers of the 80’s rebirth era … No I will not talk about Hogan or Savage or Flair….but Tommy Billington… although we will all best remember him as part of the tag team of the British Bulldogs…I will never forget these great matches with the Dream team of the WWF 80’s (Greg “the Hammer” Valentine and Brutus Beefcake) or with the Hart Foundation. But real wrestling fans will remember if you ever got a chance to see tapes of them…Dynamite in the PNW territory or those classic matches with the original Tiger Mask or even the matches against Davey Boy. Those whips to the turnbuckle or the snap suplexes. This man could shoot. A shame such a freak injury cut a great career short.
Tom Ruff, Orillia, Ont.

First of all, I am glad that the KID has finally made the hall of fame, it was definitely overdue. My memories of the Dynamite Kid, although a little foggy, come not from his time in the WWF, but his time in Calgary. I was about 7 or 8 when I started watching Stampede Wrestling, and I remember watching Dynamite right away. What a performer!!! He just knew how to wrestle. By far, he was the most complete wrestler Stampede had at the time (and of all time). He was so quick, and agile and he could work a match like no other. His feuds with Bad News Allen, are in my opinion, legendary. I always felt that he had trouble with Bad News. As well as his feud with Gama, it was such a pleasure to watch him. I feel sad that really, not that many people knew about his ability. Yes, people watched him as part of the British Bulldogs, yet, his best years were in Calgary. I only wish that I could see fight Tiger Mask. Those matches are supposed to be some of the matches ever fought. With the WWF and WCW promoting the storylines, innuendos etc. rather than the wrestling, and people praising wrestlers such as Hogan, Savage, Hart (although his is deserved) as well as the Rock and the Undertaker, these guys and pretty much all of the guys wrestling now couldn’t hold a candle to who I think is THE BEST wrestler that I have ever seen, (and I have seen many) The Dynamite Kid.
Rino

I was fortunate enough to see the Bulldogs in their heyday, when they were fueding with The Hart Foundation (still some of my most valued photos!) Between the four of them, they were the BEST of the best. I can’t think of a tag-team today that could compete with either of them. Tom’s snap-suplexes are still the fastest I’ve ever seen. It’s truly a shame to see the state he has fallen to, and the virtual lack of concern about him from others in the profession. Here’s hoping for good sales on his new book.
Adam G. Alsop

Where does one begin to describe whom they consider to be the greatest wrestler of all time? Wait a minute, some might say, the greatest of all time? Are you serious? Yes completely serious.
Oh, perhaps not the greatest in terms of titles or longevity but certainly the greatest in terms of work rate and performance. And after all is that not what sports entertainment, er excuse me, professional wrestling is all about?
Never mind the common refrain that wrestling is fake, as if the assertion of which is somehow intended to denigrate the quality of the athletes involved. Wrestling is no more fake then Swan Lake is fake. Both require performance and execution, practice and discipline.
Never mind that both happen to follow a script, the true quality resides in the ability to raise the athletic performance to the level of an art form. This is precisely where the Dynamite Kid stood head and shoulders above the rest.
In all the many great matches that I was fortunate enough to observe him in (beginning in the early eighties with Stampede Wrestling) I cannot recall even a single occasion when his performance was lacking in passion or commitment.
While it sounds like a terrible cliché, this was a guy who never took a night off, never took an easy stride, gave it everything he had night in and night out. The fans always got their money’s worth when he was on the card. (Oops, guess that was about three or four clichés rolled into one).
Cliché or not in his case it was absolutely true. Add to this the fact that the guy was one of the most extraordinary athletes to ever step into the squared circle and you have what I consider to be an unbeatable combination.
I mean I ask you, to this day has anyone ever witnessed a faster snap suplex? Has anyone ever moved with as much speed and grace in the ring while packing as much power in the same sort of frame? Did I hear someone say Total Package? And I don’t mean the one dimensional WCW variety.
I could go on and on but I’m certain this is getting too long. Suffice it to say that no one has even come close to supplanting Tommy Billington as my favorite wrestler of all time. The Kid was special. Once in a lifetime kinda stuff. Here’s to you Tom, I hope you enjoy this dose of well earned respect!
Cliff Hanlon

I too watched Dynamite Kid growing up in Calgary. Simply awesome. Watching him live in Pavilion with only a couple hundred people was great. The best feud he ever had was with Davey Boy Smith. Then a couple of weeks later there they were together as the British Bulldogs. I just couldn’t figure out what was up. How did these bitter enemies become partners. I was shocked but still enjoyed the way they tore through other teams. Yes wrestling has changed but Dynamite is still the best
Dale Halvorson

Dynamite Kid was no doubt a tremendous talent inside a wrestling ring, but the one time I met him will live with me forever, and not for a good reason. At a WWF card in Halifax in 1988, I worked for the arena where the event was being held, the Halifax Forum. During intermission, it was my job to take refreshments ( soda pop and beer ) to the wrestler’s dressing rooms. My first stop was the “heel” dressing room, where I met some of the nicest guys you would meet anywhere. The Islanders, Butch Reed, the late Rick Rude, Nikolai Volkoff and others were very appreciative that they were getting free drinks, so much so that just about all of them offered to give autographs to show their appreciation. Different story in the “babyface” room. There I encountered perhaps the rudest person I’ve ever met in my life, none other than the Dynamite Kid. As I brought the stuff in, the ever gracious Dynamite ordered me (very profanely, I might add ) get out of the room, which he had no business doing since I was only doing my job, and providing him with free beer. Ignoring him, I went about the task of placing the drinks on a table, all the while Dynamite was still yelling and swearing at me. He then arose from his seat to, I assume, physically remove me from the room. Had it not been for the timely intervention of Jake “The Snake” Roberts, there probably would have been a physical confrontation. Jake proceeded to tell Dynamite in no uncertain terms to mind his own business, and let me do my job. After reading an article in SLAM! Wrestling about Dynamite’s autobiography, I almost feel sorry for him now, but looking back, the way he treated me that night in 1988, was no way for one of the “good guys” to act. I saw the side of Dynamite Kid that a lot of wrestling fans never saw, one they should never have to see in any of their heroes, wrestling or otherwise. Hopefully, one day, Tom will be able to put all his bitterness behind him, because his greatness in the ring is something that will never be forgotten.
John Greeley, Halifax Nova Scotia