Mr. Hito remembered as a wrestler and trainer

Colleagues of Katsuji Adachi, who wrestled as Mr. Hito and died Tuesday in Japan, spoke very highly of him, as a wrestler, as a trainer, and as a man.

Adachi started his career in 1956 at the age of 14 in Japan, beginning as a sumo wrestler. In the late 1960s, he turned to professional wrestling for Japan Pro Wrestling, and he worked mostly tag and mid-card matches throughout his Japanese career. 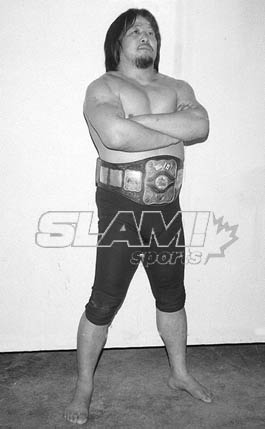 In 1973, he toured North America for the first time, working mostly in the Central States (as Tokyo Joe) and Stampede Wrestling (as Mr. Hito) territories. He held the Calgary version of the NWA International Tag Team Championship eight times with partners like Big John Quinn, Heigo “Animal” Hamaguchi and Michel Martel. He and Hamaguchi would win tag titles in Florida and what would become World Class in Dallas.

In 2004, his most famous student, Bret “Hitman” Hart, explained what Hito meant to his father’s company. “Back in the heyday of Stampede Wrestling, Hito was one of Stu’s most trusted foremen and reliable workers,” wrote Hart.

Others with connections to Stampede Wrestling shared their thoughts on Mr. Hito at the Cauliflower Alley Club reunion in Las Vegas.

“I think Mr. Hito set a standard for a lot of guys. If you watched him work night after night there was a consistency,” said “Cowboy” Dan Kroffat, one of Stampede Wrestling’s biggest stars of the 1970s. “He was solid, he was believable, and I think he was the type of guy that if you worked with him, you’d have a good match because he was the kind of guy that was serious and he was a professional through and through.”

But for all of his accomplishments in the ring, Adachi’s legacy is probably best summed up by those he helped train, both officially and through his willingness to share his knowledge. 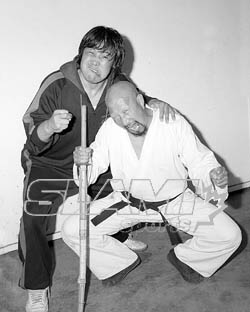 Adachi assisted in the training of Bret Hart, Shinya Hashimoto, Kensuke Sasaki, Jushin “Thunder” Lyger, Hiro Saito and Hiroshi Hase when they worked for Stampede out of Calgary during the late 1970s and early 1980s alongside his partner, Kazuo Sakurada. The two worked alongside Stu Hart in the infamous “Dungeon” for years.

However, according to Akio Sato, who knew Adachi in Japan, he was always a helpful man. “When I started in the business, he was a bit of a trainer with the young boys, he was giving all the new guys advice, how to do their training and stuff like that,” said Sato. “He always liked to teach young boys. He was funny and makes jokes, but also, he’s been through it, so he takes time for the young boys.”

“Hito and Sakurata trained Bret and certainly others,” he said. “Hito was the type of a guy that would share his knowledge in the dressing room in a two-minute conversation or a 25-minute conversation. A real credit to the business.”

“Mr. Hito was a trainer. He was a quiet guy and went about, if someone wanted help, he was there, he was available,” Kroffat said, adding that that was an exception in the business. “Quite often we were so concerned with taking care of our own work that we didn’t look around us. But Mr. Hito was there if there was a guy who needed a tip or needed advice, he would do it. Obviously, he was instrumental in helping guys go to Japan. So I would say an ambassador to the business for sure in a quiet, unassuming way; he wasn’t boisterous, he wasn’t outspoken, and if he had an ego, it was well contained.”

Bob Johnson began his involvement with Stampede Wrestling in 1979, in a variety of roles, including advance publicity. He remembered one time when the travel van broke down on the way to a show, and two bad guys guys, Mr. Hito and the Cuban Assassin (Angel Acevedo), were forced to fill time. 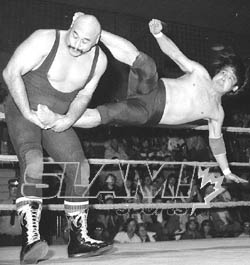 Mr. Hito wasn’t always a villain in Stampede, though. “[It] used to amaze me that Hito could become such a hero in a western Canadian city. Looking back, it makes perfect sense when you consider that fans in Calgary always applauded technically-sound wrestlers,” wrote Hart.

Johnson said that Adachi stayed involved with Stampede crowd during his time in Calgary, where he retired to and raised a family. “I spent a lot of time with old Mr. Hito and you couldn’t fool him on anything. Very smart guy,” said Johnson.

A automobile accident in 1982 would slow down Adachi’s career before he finally retired in 1986. He moved to Osaka, Japan about 2003, and ran a restaurant.

For years, Adachi battled diabetes, and lost his right leg to the disease about six months ago. His death on April 20th came at a hospital in Japan. A ten count ceremony was held at the following New Japan Pro Wrestling show in Osaka, Japan.