LAS VEGAS — For more than 30 years, Jim Ross has been calling slobberknockers. On Tuesday, he delivered one of his one.

The veteran announcer, whose Oklahoma twang represents the sound of the sport to a generation of fans, had a packed house at the annual Cauliflower Alley Club banquet hanging on his every word, as he accepted Art Abrams Lifetime Achievement Award. 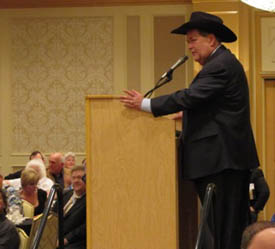 Jim Ross at the podium on Wednesday night. Photos by Steven Johnson.

Comparing himself to past Art Abrams winners such as Dan Gable and Danny Hodge, he joked: “I feel like a pair of brown shoes at a formal wedding … This is a really neat honor.”

Ross’ stemwinder, which ranged from the ribald to the serious, was one of the highlights of the banquet, which capped the club’s three-day reunion at the Gold Coast Hotel and Casino.

He was introduced by “Stone Cold” Steve Austin, who credited Ross’ commentary with helping him to hit the heights of wrestling in the 1990s.

“When you’ve got a gut like ‘Stone Cold’ Steve Austin, full of piss and vinegar, and you can make people feel sorry for him because he’s being screwed by the boss, that’s a hell of an accomplishment,” Austin said.

Ross traced his roots from rural Oklahoma to the WWE, where he started in 1993 at WrestleMania IX at Caesar’s Palace just a mile from the site of the CAC reunion.

“It’s been a great run. My life has been really blessed,” said Ross, who brought complementary bottles of his barbecue sauce for attendees to enjoy.

Though he has been off WWE TV for several months, Ross told the crowd that he has not called his final match, regardless of the federation in which he is working.

Quipping that he spoke more at the CAC banquet than at WrestleMania 26 — he was not part of that crew — he said, “I ain’t dead. I’ve got a lot left to do … I’m not going to be silenced at this moment, I want to continue to do work somehow, some way.”

Also at the banquet, which attracted one of the largest CAC crowds in years, was Ted DiBiase, who received the Iron Mike Award, considered to be the club’s highest honor.

DiBiase was quiet and humble for a wrestler who made his mark as “The Million Dollar Man,” noting the although the Iron Mike Award is named for CAC founder Mike Mazurki, it also could apply to Mike DiBiase, his father, who died in the ring in 1969.

He recalled the tragedy led the wrestling community to strengthen its bonds with him, even though Terry Funk, the former world champion who presented him at the banquet, urged him to stick to football, not wrestling.

“That’s what this industry is. It’s a huge family. Until you’ve lived the life that we lived … you just can’t understand it until you experience it.”

Dan “The Beast” Severn made it to Las Vegas in the nick of time from a volcano-ash blocked airport in Amsterdam to take the Lou Thesz Award. That gave him time, he said, to determine that Thesz, who died in 2002, was the one opponent he truly would have liked to go to the mat with in a straight-up world title match.

“My only regret is Lou is not here to hear this,” he said.

Higuchi said he was training with Dick (The Destroyer) Beyer in the early 1960s, when Beyer told him to keep his eyes open and his mouth shut.

“I’m Japanese-Hawaiian,” Higuchi said he told his trainer. “How do you think we lost the war?”

Women’s honoree Joyce Grable recounted how she somehow made it through a family of 21 children to excel as a pro. She credited The Fabulous Moolah for breaking her into the business and rescuing her from a nondescript life in her home of LaGrange, Ga.

Pat Barrett was the International honoree, though he too was stranded in Europe from the fallout of the Icelandic volcano and was not in attendance.

Oliver John received the Future Legend Award, while veteran Tom Andrews won the first Golden Ear Award, which goes to a grappler who was in the business for at least 20 years with multiple guises. Magic Schwarz took the REEL Award, given to a wrestler with Hollywood connections.