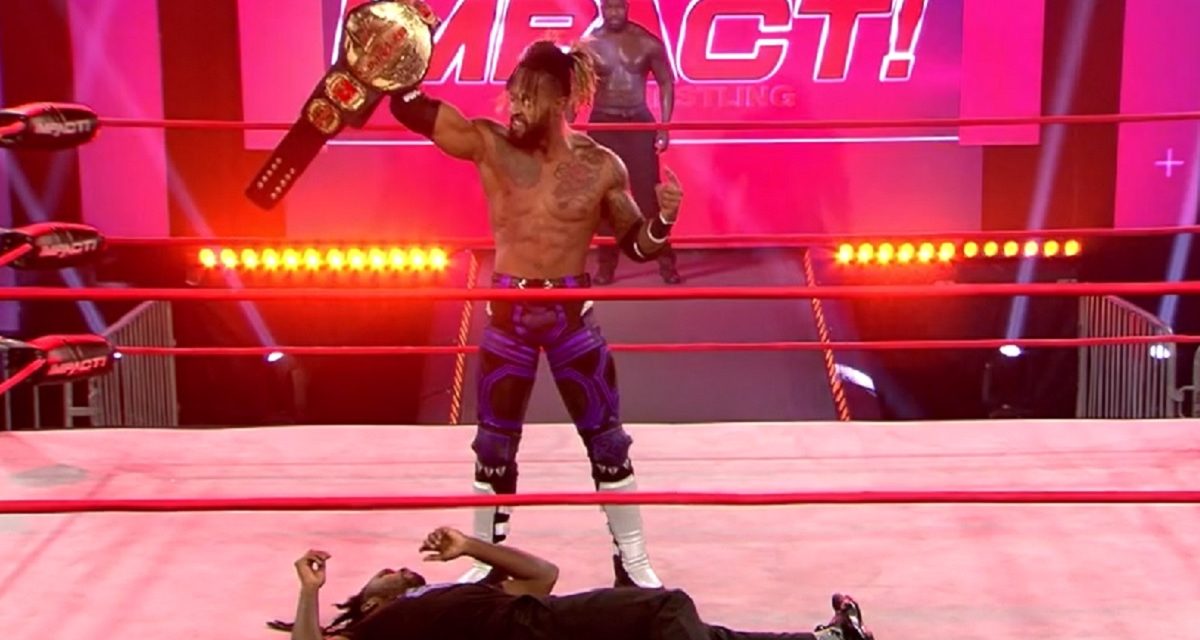 Rich Swann spent most of this year trying to capture the Impact World Championship from Eric Young. But now that he’s finally become champion, the hunter has become the hunted, with Young, Ken Shamrock, and Sami Callihan all staking claim to contendership. This week, Chris Bey and Moose also entered the mix, leaving a lot of possible opponents for Swann at the upcoming Final Resolution.

The Guns charged at the bell, and gained a quick edge, dumping both opponents to the floor where Sabin hit a flying dive. The Guns tagged in and out for some aerial assaults, but Shelley eventually got caught. On commentary, Josh Mathews basically admitted to not watching the show, since he wasn’t aware of Larry D’s alter-ego Lawrence, who emerged during Wrestle House earlier this summer. The Guns used hit-and-move tactics, but again got caught, and in a neat spot, Larry D caught Shelley in a corner attack and dumped him right on top of his own partner Sabin. XXXL took over then, hitting big moves and squashing Shelley in the Karachi Krunch. Sabin ran in to save his partner and then they double-teamed Larry for a bit. XXXL recovered and hit a Low Demolition-style elbow, but couldn’t get the pin. Larry tried for a top rope splash, but Sabin moved and the big man crashed hard. The Guns then hit more double-team moves and the match became a de facto Texas Tornado affair. The Guns’ experience helped them, and they eventually flattened Larry with the UP Splash for the pin.

This wasn’t great. The dynamic was a bit weird in this one, with the Guns bending the rules more than XXXL did. There were too many wide shots that showed one member of a team just waiting on the floor and watching for the pin so he could break it up. And the ending was a bit cluttered, especially when the referee stopped any pretense of enforcing the 5-count. Not one of the Guns’ better matches since their return.

Impact Executive Vice-President Scott D’Amore, flanked by a few security guards, confronted Sami Callihan and Ken Shamrock as they made their way into the building. He suspended Shamrock for 30 days for hitting Impact official D-Lo Brown last week. Shamrock was ready to knuckle up, but Sami talked him down. Shamrock left the premises, and Sami stormed past D’Amore and crew and headed into the building.

Backstage, John E. Bravo confronted Larry D for shooting him, leading to a brief fight until Tommy Dreamer broke it up. Larry tried to explain to Dreamer that it was all a set up, so Dreamer said he’d escort Larry downtown to explain it to the authorities. It was a ruse, and instead, Larry sucker-slapped Dreamer, knocking him out cold. He and Acey skedaddled, while Bravo looked after the fallen Dreamer. Not sure this was needed. Last week’s trial was the natural conclusion to this storyline, and now they risk it going into dead horse territory.

Kelly and Jordynne started off with a stalemate sequence, leading to both women tagging in their partners. Jazz outmuscled Renee, but after some sneakiness by Kelly on the outside, Michelle was able to take over on Grace. Kelly in particular impressed with a nice gound-and-pound moment where she just mounted Grace and hammered her with a flurry of fists. Grace fought back and got the tag to Jazz who cleaned house. But when Grace got back in, Kelly took her down with a big headbutt and a cannonball senton that nearly got her the win. Grace powered up, and hit a Grace Driver, but Michelle made the save. She’d pay for that, though, and ate a Jazz Factor that put her down for three.

There were a few nitpicky things during this match, but overall it was fine. It’s neat to see Jazz back in the ring, but with her having announced her retirement, unless she and Grace are going to win the tournament, it may have been better to advance Michelle and Kelly, just to inject some new names in the division.

The Flashback Moment of the Week saw the Motor City Machine Guns beat Generation Me (now known as the Young Bucks) in a Full Metal Mayhem match to retain the Tag Team Championship at Final Resolution 2010.

In their dressing room, Ethan Page was still stewing about his loss to Swoggle last week. He admitted to (boasted about, rather) taking out Doc Gallows, and then challenged Karl Anderson to a match at Final Resolution, with the stipulation that if Page wins, The North get a title shot against the Good Brothers. Alexander seemed bemused by Page’s frustration about the Swoggle loss. Page was, as usual, really strong on the mic here.

Elsewhere, Tenille Dashwood and Kaleb tried Alisha, who seemed preoccupied with spying on someone. She finally found her prey and attacked Sami Callihan in response to Sami’s assault on Alisha’s husband Eddie Edwards last week. Security ran in and pulled her off of Sami.

It looks like these two drew the short straw this week to get beaten down by Eric Young and Joe Doering. Because that’s what happened within seconds of them locking up. After the pummeling, Young took the mic and reiterated the message that the world belongs to him and Doering.

At some point, they need to pull the trigger on this and give some direction to Young and Doering. Either have a team come out and challenge them so they can feud, or they need to start interfering in matches of real consequence. Only interrupting throw-away matches is fine to a point, but without some stake-raising, it’s eventually going to be tired.

Backstage, Deonna Purrazzo and Kimber Lee asked James Mitchell about his progress on turning Su Yung back into Susie. He said it’s not a quick and easy process and that he hadn’t yet found Su. They said they’d go to the ring and get her to help move things along.

In the back, Cody and Jake were upset about the attack. Jake said they would need to do something, but Cody told him that it was his responsibility. He talked about his history with Eric Young, and said that he had to prove to Young that he wasn’t a nobody, and challenged Young to a match next week. Good promo by Cody. He and Young could be really good next week, if they let them do what they can do.

"Next week I will prove to @TheEricYoung that I am not a nobody."

Purrazzo and Lee hit the ring. Purrazzo demanded Su to come to the ring, suggesting that Su would otherwise forfeit her rematch clause for the Knockouts Championship. By the time Su got there, Purrazzo and Lee had headed for the hills. Su was in there alone, and James Mitchell’s music hit. He told her she would have to pay for her sins. An army of her unholy bridesmaids came out and circled the ring. As Su stared at them, Lee and Purrazzo rushed in and attacked her. Su tried to mist them, but Purrazzo chocked her out and Su choked on the mist. Purrazzo hit La Cosa Nostra, knocking Su out, and the bridesmaids carried Su up the ramp to Mitchell, and they all left.

In the back, Moose warned Chris Bey that if Bey ever beats Rich Swann for the Impact World Championship, he would lose it to Moose.

Karl Anderson interrupted an announcement by Gia Miller and accepted Ethan Page’s challenge for a match at Final Resolution. He teased an appearance by a friend or two of his own.

This one started off quickly, with Steve eventually taking control by tying up Raju in the Upside Down and then biting his arms.

But a desperate Raju whipped Steve face-first into the ropes and then hit a Flying Flatliner before a commercial break. Raju was in control when we got back, nearly getting the pin a few times, including after a nice Fisherman’s Buster. Steve used some spinny reversals to get out of danger, and soon locked on a Straight Jacket submission that made Raju scramble to get to the ropes to break or else his title was lost. Steve went for a roll-up pin on the hurting Raju, but the champ used the ropes for leverage to get the dirty pin.

This was good. Steve is often used in throwaway comedy segments, but people forget that he can go in the ring if given the chance. Raju’s retain the title at all costs character is still fun.

Backstage, Kiera Hogan and Tasha Steelz were loving having the wad of cash and talking about going on a spending spree. Fallah Bahh came up to them and confronted them for stealing the money from him. They played hot potato with the money behind their backs and he bought it. They said he could have it back next week, and that was good enough for him. After he left, Johnny Swinger came up to the girls and flirted with them, but they shot him down.

TJP was consoling Crazzy Steve, when Brian Myers walked in to suck the charisma out of the room and mock Steve. TJP challenged Myers to a match, and Myers accepted for next week.

Willie won the opening slap exchange, then punished Bey with hard chops and then a Greco-Roman Double Purple Nurple, which was funny. Bey escaped to the floor, but Mack caught him and dropped him hard on the ring apron. But as he tried to re-enter the ring, Bey trapped him up in the ropes and hit a dropkick to the big man’s knee, taking control of the match going into commercial. Back from break, and Mack was trying to mount a comeback, but Bey kept thwarting the effort by going back to the weakened knee. Willie was able to turn the tide with a huge lariat, but a lot of his offense arsenal was impeded because of his bad knee. Bey hit a nice Bey-stroyer, but Mack kicked out. Bey slapped Mack in frustration, and that was enough to fire up the big man. He hit a Pop-Up Punch and then a big Stunner to drop Bey for three.

This was good. Mack is another one who is often used only in comedy matches, so it was good to see what he can do in a real match. His selling of the leg was good, and him having to use a finisher that didn’t rely on his leg strength was a good, logical ending.

After the match, Moose ran into the ring and Speared Willie Mack out of nowhere. Rich Swann ran in and hit Moose with a Kicknado to send him out of the ring. As Swann celebrated, he didn’t notice Bey run up behind him and hit the Art of Finesse (which I’d been calling the Bey Blade in absence of the commentators giving the move a name) to drop the champ. The show ended with Bey in the ring posing with the World Championship over a fallen Swann, while Moose glared at them from the entrance ramp.

Some strong matches on this episode, with some people – Crazzy Steve and Willie Mack – getting a chance to shine instead of being used in disposable comedy segments. The episode seemed a bit rushed with some of the non-wrestling stuff, though.  That said, it ended well, with the final segment helping build intrigue for the upcoming Final Resolution show.