The curator of the new exhibition at the University of Saskatchewan — “Wrestling at the U of S: Lessons From the Squared Circle” — was having a tough time getting the displays up on Wednesday, as everyone who saw the photos and collectibles wanted to get a closer look, and share their own memories of professional wrestling. 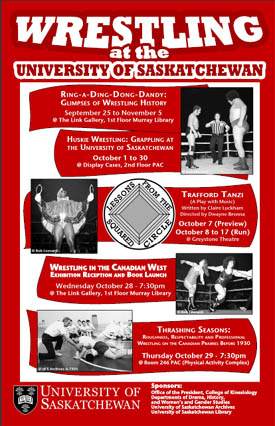 The month-long exhibit, opening today in The Link Gallery and running until November 5th at the University in Saskatoon, is designed to be a, “celebration of the history and social impact of wrestling.”

The man behind it all is Neil Richards, a retired employee of the University of Saskatchewan library’s Special Collections Department.

Much of what is on display comes from his own collection.

“I’ve been developing this collection for about six years,” Richards told SLAM! Wrestling.

Richards collects primarily pre-1970 wrestling history, keying in on things with a Saskatchewan connection. The first purchase he made on eBay was a Dory Funk Jr. photo by Stampede Wrestling photographer and Saskatchewan promoter Bob Leonard. The “Ring-A-Ding-Dong-Dandy” gallery of photography by Leonard and the late, great Tony Lanza are perhaps the stars of the exhibit, which also includes collectibles, programs, books, and other goodies.

“He’s a long-time wrestling fan, with a particular interest in Stampede since he was sort of raised on it as so many in the west were,” Leonard said of Richards. “Given his background in collections, he started one of his own a number of years ago focusing on Stampede memorabilia — programs, posters, old pub photos, all that sort of thing. I’ve known him for perhaps five years or so. He’s sort of your typical librarian, quiet, unassuming, intelligent — not your regular ‘rasslin’ fan.”

After his retirement, Richards was allowed his own little space in the library, where he began cataloguing his collection, which includes 1,200 black and white photos. He recalled that many people just wanted to “talk about their experiences with Stampede Wrestling. I had this picture of Sweet Daddy Siki, and everybody remembered that.”

One of those who found the collection fascinating was Dwayne Brenna, head of the University of Saskatchewan Drama Department. He mentioned to Richards that he was considering putting on the play Trafford Tanzi, which is about a young female pro wrestler. The gears started turning, and Richards’ passion became the bigger exhibition. Trafford Tanzi runs at the Greystone Theatre from October 8-17.

The amateur wrestlers at the school get into the act too, with a display, “Huskie Wrestling: Grappling at the University of Saskatchewan,” running October 1-30 in the display cases on the second floor of the Physical Activity Complex. 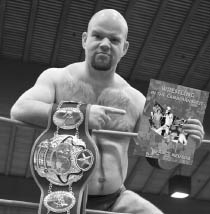 Two respected Canadian historians are also going to present their work during the exhibition.

The book launch for wrestler/historian Vance Nevada’s Wrestling in the Canadian West will be on Wednesday, October 28th at 7:30 pm.

“I was excited to learn that this event would be hosted in Saskatoon,” Nevada said. “I have certainly enjoyed some great matches there and I think that it’s a town that is often overlooked for its significance as part of Stampede Wrestling’s weekly circuit for decades.”

The next day it’s a little more academic, with sports historian Nathan Hatton presenting his 2007 Master’s thesis, “Thrashing Seasons: Roughness, Respectability and Professional Wrestling on the Canadian Prairies Before 1930.” Hatton, who did his Master’s at Lakehead University, is now a doctoral candidate at the University of Waterloo, where his research focuses on wrestling, ethnicity, class and masculinity in western Canada.

Richards was aware of Nevada’s work, as it is the second edition of his study of wrestling in the Canadian West. But Hatton’s work was of particular surprise. “It sounded very interesting because he was looking at very early professional wrestling history in the prairies,” he said.

Leonard, for one, is pretty excited about the show, which isn’t too far from his Regina home.

“This is a little like Andre the Giant or Hulk Hogan; it’s one of a kind,” said Leonard. “Who would expect a major university to mount a wrestling presentation, involving several colleges and departments? But the U. of S. has done it, and I think the public will enjoy it and learn from it.

“A public exhibition of my work is particularly rewarding. I’ve been published in many places, but there’s something special about seeing those familiar images in a gallery setting.”

Nevada, who currently calls Red Deer, Alberta home, is pumped to head to Saskatoon too. “I am thrilled to see that so many aspects of wrestling are being covered and that the University of Saskatchewan has really embraced this event. It is great to see the contributions of Bob Leonard, who has worked tirelessly in support of our business, to receive due acknowledgment for his role in illustrating a generation of true legends in our industry. I am really looking forward to this event.”

FREE? DETAILS HERE ON HOW TO GO SEE IT

The exhibition, book launch reception and presentation by Nathan Hatton are all free; only the Greystone Theatre production of Trafford Tanzi is charged. The Ring-A-Ding-Dong-Dandy exhibition is available for viewing during library hours at the Murray Library (aka Main Library) which is located next to the Place Riel Student Centre (3 Campus Drive). Library hours are Monday-Thursday 8 am to 10 pm, Friday 8 am to 6 pm, Saturday 10 am to 6 pm, Sunday Noon to 8 pm.

Greg Oliver is pleased that his first book, The Pro Wrestling Hall of Fame: The Canadians, will be prominently featured at the University of Saskatchewan exhibition. Greg can be emailed at [email protected].