Johnny Swinger recently returned to Niagara Falls, New York, to find home really is where the heart is.

“The show went great. The mayor showed up to proclaim it ‘Johnny Swinger Day’ in Niagara Falls; now that I have my own holiday, maybe I should move back,” joked Swinger, a.k.a. Joe Dorgan. 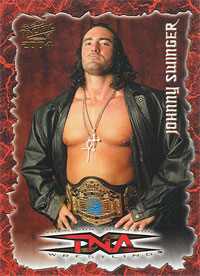 Johnny Swinger earned a TNA trading card during his stint there.

The Toronto-trained Swinger has wrestled for WCW, ECW and TNA, and later WWE as “Johnny Parisi.” His return to western New York was his first in five years, as he headlined the September 12th Buffalo Championship Wrestling “Hostile Homecoming” card to take on and defeat “Big League” John McChesney. The date held added significance for Swinger, as it marked the anniversary of his first match in Toronto in 1993.

“It was a battle royal that included Edge, Just Joe (Joe E. Legend), and in the crowd as a fan, the man known now as Christian.”

Swinger last worked for BCW in 2004, and said he jumped at the chance to do so again when he got the call.

“I got to work many times at the HSBC Arena in Buffalo for WCW (Marine Midland Arena then), as well as for WWE. Also the Burt Flickinger Center for ECW. But Niagara Falls was my home, and I haven’t wrestled there since 1996 when I ran a couple of shows before going to WCW in ’97. There is no greater buzz than performing in your hometown in front of your family and friends. I’m very excited about it, because unlike the big shows, it will be a more intimate setting and I am the featured act,” he said just before his appearance.

Since being released from WWE in late June 2006, Swinger has been working for Georgia Championship Wrestling, most recently as only a talent after also juggling assistant booker and agent duties. He has just started working for some other promotions in Alabama and the Carolinas as well.

“I’ve also been doing some acting, which is a benefit of not being under contract to a major company. I had a small role in a Lifetime Movie Network movie, The Wronged Man, which premieres in November. I also just signed on for another Ultimate Death Match, which starts shooting in New York City at the end of October, so I’ve been very busy.”

Swinger followed up his BCW show with another match the next day near Guelph, Ont.

“I’m just going to continue doing what I’m doing and see where the acting takes me.”