By JOHN M. MILNER and TREVOR GIBERSON — For SLAM! Wrestling

Many Ontario and Michigan wrestling fans remember him as Johnny the Hollywood Swinger. Other fans know him better as simply Johnny Swinger of WCW. And while Swinger may really be Joseph Dorgan of Buffalo, NY, he could soon be headed the bright lights of the WWF.

“It’s going a little slower than I had anticipated but it’s all about patience and after seven years, I’ve got it,” Swinger says of his movement from World Championship Wrestling to the World Wrestling Federation. “I’ve got patience. I’m in no hurry. I’m twenty-four years old, it’s not like I’m getting old or anything. It’ll happen.” 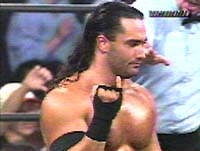 Johnny Swinger in his WCW days.

“It was just something I wanted to do since I was a kid, a lot like most other guys that get in,” Swinger says about wanting to break into the wrestling business. “I think I was like eight years old, when I went to my first show at the Buffalo Auditorium, and that was it. I was hooked the first night.”

The main event of that night’s show was then-WWF World Champion Hulk Hogan defending against Samoan Afa. “It was when Hogan had just won the title in 1984. My uncle took me there,” Swinger remembers, adding that he was cheering for Hogan and not Afa. “I was a big babyface guy when I was a kid. Once I got to be about 12, 13, I started getting into the heels, heels straight across. Eventually, when I started, I wanted to be a heel.”

When he turned 18, his pursuit of wrestling training took him to Ron Hutchison and Sully’s Gym in Toronto, Ontario where he trained with the likes of Adam Copeland (WWF’s Edge) and Joe E. Legend.

“Basically we all trained together, we trained each other. We all worked together, around here in Toronto, outside of Toronto. We used to do a lot in Winnipeg,” Swinger explains.

Ron Hutchison once said of Swinger that he had the scariest commute of any wrestler he had ever known. “It was about an hour and a half drive from my house to the gym in Toronto,” Swinger explains. “It was guaranteed every Saturday, Sunday. About four, five months into the training, he added the Tuesday, so I was up there three days every week, never missed a day. I’d go up there if I was sick, hurt, snowstorm, I’d make it.”

Swinger says now that he has a lot of respect for the way that he was trained. “I got to see the way guys are trained now, such as down in WCW, the Power Plant, for example. Not what I went through. What we went through was a lot tougher, in terms of actual training. I see guys coming into the Power Plant and getting right in the ring and wrestling and I think back to when I trained. I had to run around the building about thirty times. I had to do an hour work out, before I was even allowed in the ring. And we were taught bumps on the floor, not in the ring. Everything was so much tougher and I see guys coming in now and it’s so much tougher. Anyone ever asks me where’s a good place to train, I would suggest Ron, because I know that they’ll be trained properly anyway. As far as making money, I would suggest, go to WCW with the Power Plant, get on steroids and they’ll probably give you a contract. If you really want to learn how to work, I would definitely suggest people would train here instead. You’re going to learn the business better.”

While Swinger was the first to sign with a major company (WCW in 1997), he is quick to note that his friends are “doing good” too. “I’m proud of them, because they worked just as hard as me, if not harder, because they stayed in the trenches a little longer than I did so they deserve everything they’re getting right now.”

Edge remains Swinger’s favourite wrestler that he’s ever worked with. “It’s weird that I can say that because we haven’t worked with each other in over three years. We did the northern tours of Winnipeg where we were married to each other, every night, night after night. He’s probably the most I’ve ever worked with of anybody. I know his stuff and he knew mine. It’s really good to work with the same guy, a friend that you trust.”

After the training, Swinger worked with Windsor’s Border City Wrestling organization, which was run by Scott D’Amore and Chuck Fader. “I met Scott in ’95, I think, so I’d been working about two years,” Swinger remembers. “He originally called me up to ask me if I wanted to do WCW TV, and that’s how I got hooked up with him and he started booking me for some TVs here and there, and then I worked with him in Windsor. I’d drive over from Buffalo four hours to work for Scott, probably every other week, a couple of times a month.”

In addition to Border City Wrestling, Swinger also appeared on a number of area independents. “Mainly, everything was up here. I worked in Detroit for Malcolm Monroe (Insane Championship Wrestling), worked in Cleveland for a while with J.T. Lightning (Cleveland All-Pro Wrestling), Winnipeg, which I did with Christian and Edge and Joe E. Legend, too. That was basically the gist of it, everything else was WCW. I worked about two years before I started with them.”

Swinger also continued to appear on WCW telecasts, thanks in part to Scott D’Amore. “Scott started getting me booked for TV in ’95. I was driving to Atlanta at least twice, three times a month. I drove to Orlando for the syndicated TVs. Did that for about a year and a half, plugging away. Terry Taylor took a liking to me and I just worked on it, and finally they offered me a contract in May 1997.” 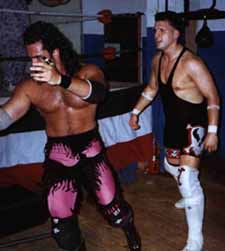 That night at the Georgia Dome was July 6, 1998. Swinger took on Chavo Guerrero Jr. on the Monday Nitro where Goldberg defeated Hulk Hogan to win the WCW World title. Swinger admits to enjoying wrestling Chavo Jr. “Actually, I’ve had a lot of good matches with Chavo. We’ve worked about five or six times and it was always good. It was almost like I was hoping that they would put us in a program together, we had such good matches.”

Swinger did meet with some success in WCW, defeating Barry Horowitz and Jim Powers. “I beat Barry a couple of times. Barry’s actually a good friend of mine. I would like to put Barry over because he’s a guy I grew up watching,” Swinger explains. “I almost felt bad going in there and beating the guy, because this is a guy I used to watch when I was a kid, that I have a lot of respect for who I feel didn’t get his break in the business that he rightfully deserved. We’re friends to this day and actually, I’m doing my best to get him booked up here on some shows in the future.”

Swinger also competed against Diamond Dallas Page at an Orlando TV taping in a match that he would list as his best match ever. “He was just starting to take off, so to say, when he first got his big push. He was considerably over at the time, which made the match really good, because the people were really into it. We had a good, eight or nine minute match, which is pretty long for TV. It was really competitive, and I felt that it elevated me just by having a match with him.”

In addition to appearing on television, Swinger also made several appearances on pay-per-view, competing in a cruiserweight battle royale at Slamboree ’98 as well as World War III in 1998.

“It was a big rush!” Swinger exclaims when asked what it was like to appear at the events. “Even though I wasn’t in a real big match, not many people can say they did that, so it was fun. Wrestling in a battle royal is no pressure at all, so it was really fun. You go out there, you’re on pay-per-view. It was a big thing. Actually, I had a dark match at the last Slamboree in 1999 with the guy they’re calling the Demon now. It was a good match, because he was very green at the time and I got a lot of praise from the office for making him look good.”

In late-September 1999, however, it was time for Swinger to move on. He asked for and got his release from World Championship Wrestling. “I just felt that I’d been there a long time, and it was time, basically, to move on. I left in a really good way. I went into the office and told them what I wanted to do. and they were really nice about it. J.J. Dillon told me that I had been patient for more than long enough and if I had an opportunity to better myself than I should take it. And therefore I received my release, shortly thereafter. Between then and now has been talking with New York. I’ve had a couple of matches there. I’ve been to Connecticut a couple of times for meetings.”

Swinger contends that it’s the WWF for him. “Personally, I think at this point, the WWF would be the best place for me as far as making the step to the next level. I’ve been kinda sitting on the bottom of WCW for a long-time, for reasons that can’t really be explained to me, so I would have to say that New York is probably the best place for me.”