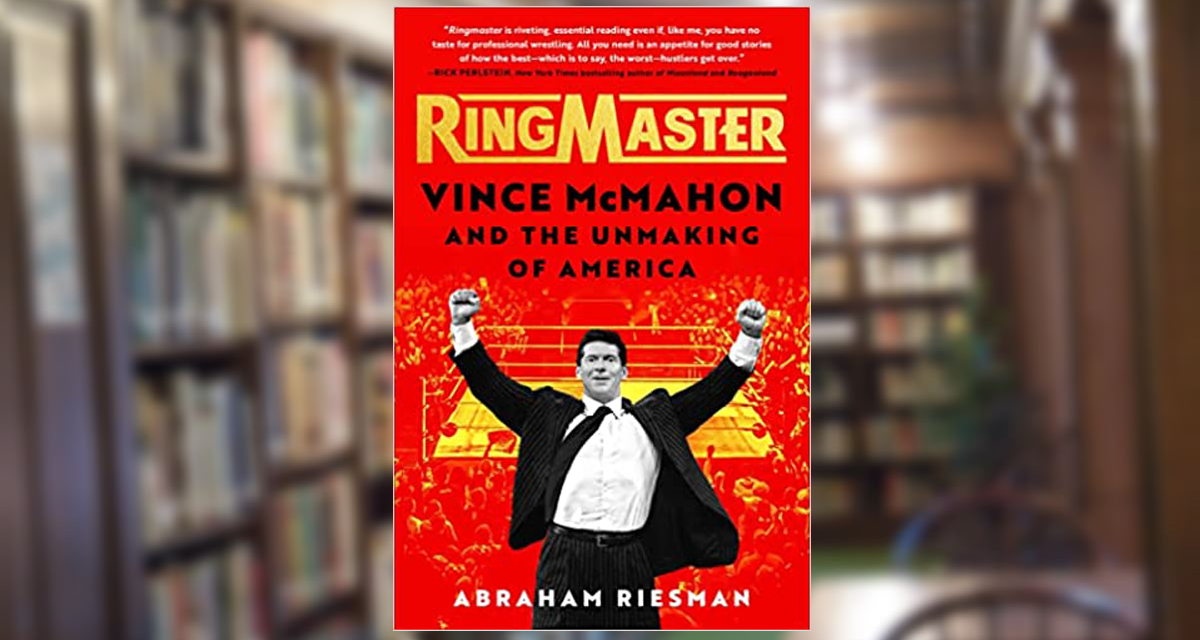 Back in 2020, this reader was ecstatic, yet I admit a bit skeptical, to hear that Vince McMahon was finally getting a biography called RingMaster: Vince McMahon and the Unmaking of America.  The ecstasy can be attributed to McMahon finally getting the bio treatment in my favorite form: a book!

Now it must be pointed out that this often-controversial pro wrestling figure has been mentioned in a plethora of previous pro wrestling documentaries, magazines, and books, most notably 2004’s Sex, Lies, and Headlocks: The Real Story of Vince McMahon and World Wrestling Entertainment by Shaun Assael and Mike Mooneyham. But now some writer had the guts and maybe a touch of insanity to tackle a full-on book on McMahon, the former Chairman and CEO of World Wrestling Entertainment (WWE). In the ongoing saga of McMahon, news broke that McMahon has returned to the WWE board and has been elected as Executive Chairman. McMahon’s daughter Stephanie, who had taken on the role of Co-CEO and Chairwoman when her father “retired,” in turn resigned from the company and there are rumors abound, but nothing yet confirmed, about a potential sale of the WWE. 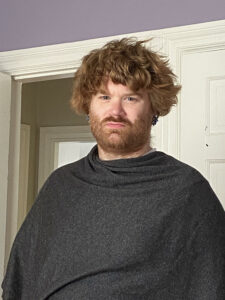 I immediately had to reach out to the author Abraham Josephine Riesman. (Riesman has recently come out as transgender and uses she/they pronouns, so that’s what I will be using in this article.) Riesman is based in Rhode Island, is a Harvard graduate, and is also a journalist whose prose has appeared in New York magazine, The Wall Street Journal, and the Boston Globe among other publications. Riesman’s first book was 2021’s True Believer: The Rise and Fall of Stan Lee. I emailed Riesman and instantly began following her amusing musings on Twitter. I confess I can’t get enough of her brain and the perspectives contained within it. She’s truly a brilliant wordsmith, no matter what the length of her prose is.

At that time Riesman shared with SlamWrestling.net about her upcoming writing endeavor: “I feel incredibly lucky and grateful to have the opportunity to write this book. I am fascinated by Vince McMahon and his place in both the culture and politics of contemporary America, and I hope I can provide readers with a window into him and his impact. Readers can expect a thoroughly researched chronicle and analysis of Vince’s life, built on interviews, documents, and footage. I’m hoping to grab wrestling fans, of course, but I also want to make the book readable for laypeople who just want a cracking good yarn about a significant and mysterious figure.”

So, ecstasy, check. But what about my skepticism? Any time you’re dealing with pro wrestling journalism, there is the constant question of: is this really the true story, or are we being kayfabed (the act of presenting pro wrestling storylines as absolutely true, or maybe in effect being lied to) here? This question becomes tenfold dealing with the elusive McMahon family. I admit, I felt some relief when Riesman shared with me via email that this biography would indeed be unauthorized. It’s safe to say I had absolutely no interest in a fangirl/fluff book on McMahon and I venture to suspect other avid pro wrestling readers didn’t either.

But now with McMahon’s name being prominently in the news, and not just on pro wrestling sites like Slam, but we’re talking The Wall Street Journal here, my anticipation for this book definitely had my ticker and curiosity at an absolute peak.

OK I won’t keep you in suspense any longer… I was provided with an advance reading copy of the book, which will be published by Atria Books, an imprint of Simon & Schuster, Inc., and officially released on March 28, 2023. Upon completion of the book, I had to conclude that Riesman has executed a thought-provoking, well-written, and creative read. She writes assertively, humorously (with just the right amount of snark), and most importantly analytically. As they say in pro wrestling, Riesman does in fact “put the boots” to McMahon rightly so in this book and proves she has the talent, experience, and strength to tackle such a divisive/controversial person. 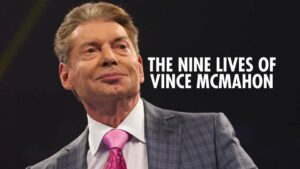 The Nine Lives of Vince McMahon documentary was released by VICE TV in December of 2022.

I do have to point out that I feel the December 2022 release of the VICE TV documentary The Nine Lives of Vince McMahon was unfortunate timing for this book. Although, I’m a firm believer that the book is always better than any documentary or movie version, and in this case that is again true, I have to admit that by watching the documentary first (which Riesman was not a part of) this book ended up being less impactful than I’d hoped for me.

Nonetheless, Riesman begins the McMahon saga by writing, “We begin at the end of the world.” Riesman is of course referring to the COVID-19 pandemic we all experienced (and somewhat still experiencing). And of course, only the McMahon family and their deep pockets could have pro wrestling deemed essential so they didn’t have to completely close up shop like so many other businesses had to during that time. Riesman also introduces us readers to a term she dubs “neokayfabe” that ends up being a reoccurring and permeating theme throughout this biography.

“This new status quo is what we might call neokayfabe,” wrote Riesman in the book’s Overture. “It says that pro wrestling, with all its spectacle, is a lie – but that the lie encodes a deeper truth, discernible to those few who know how to look beyond what’s in front of them. To those fans adept in reading the signs, another narrative emerges, and another beyond that. Suddenly, the pleasure of watching a match has less to do with who wins than with the excitement of decoding it.”

Riesman also sets up the multitude of scandals that have been associated with McMahon throughout the years. While allegations of sexual assault, pushing steroids, abuse of underage “ring boys,” a murder coverup, and numerous hush payments would bring down almost everyone, McMahon always seems to come out unscathed and with a greater sense of invincibility. As for recent events, the verdict is still out, but it’s not looking like McMahon will ever receive more than a passive hand slapping for his actions, which of course is infuriating. But thankfully there are people like Riesman who are exposing the flaws and weak spots in McMahon’s entitled/metaphorical armor. 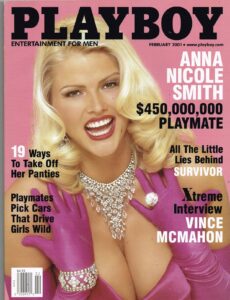 The infamous issue of Playboy magazine featuring an interview with Vince McMahon.

In chapter one of this biography, readers are taken back to McMahon’s beginnings, when he was just an unknown Vinnie Lupton growing up in North Carolina. I have to point out that Riesman impressively even consulted a genealogist to sort out McMahon’s family tree and track down interview subjects. And as we’re taken further into the story of the emergence of McMahon and his domination of the established pro wrestling territories at the time, Riesman relies on her analytical mind, investigative journalism skills, and interviews with McMahon’s relatives and childhood friends and referencing the scarce media interviews McMahon has participated in. (Most notably McMahon’s seemingly unguarded, shocking, and often uncomfortably candid 2001 interview with Playboy magazine; his appearances on TSN’s Off the Record with Michael Landsberg; and a never published 2003 interview conducted by pro wrestling author/former WWE employee Brian Solomon).

There is truly so much in this book that I could regale and respond to, but I don’t think the readers want to hear me pontificate for several hundred pages. What I will tell you is that Riesman has indeed gone over the sins and the storylines of McMahon with vigor. And for those of you who know how much I adore both footnotes and endnotes, this book has over 1,800 of them. Drool.

I also have to give Riesman props for wisely consulting and/or interviewing some intriguing pro wrestling figures including pro wrestling scribes Solomon, Dave Meltzer, and David Bixenspan; Bret “Hitman” Hart; Wendi Richter; Rita Chatterton (a former WWE referee who would accuse McMahon of sexual assault); Adnan Alkaissy (better known to wrestling fans as the manager of Sgt. Slaughter, General Adnan); Sharon Mazer; and Eero Laine. (Both Mazer and Laine were editors of and contributors to the academic pro wrestling book, Professional Wrestling: Politics and Populism.) Along with going the extra step of consulting a genealogist as I mentioned above, Riesman also spoke anonymously with some “Saudi-focused journalists” due to the WWE signing a 10-year deal in 2018 to produce pro wrestling cards in Saudi Arabia.

But while Riesman has gone beyond her due diligence with this book and in everything else she writes; I couldn’t help but keep hoping as I kept turning the pages that she got the chance to interview McMahon for herself. Spoiler: she doesn’t. Riesman doesn’t directly write about any attempts to contact McMahon and I felt that was a shame. Access to McMahon or a member of the immediate McMahon family such as Linda, Shane, and/or Stephanie, would have significantly raised the caliber of this book, placing it right alongside the stellar Shamrock: The World’s Most Dangerous Man by Jonathan Snowden, where I so wanted it to be. While I don’t fault Riesman for not landing an interview with McMahon, especially given the current headlines Vince is generating, I wanted/needed to know she tried her best to make that happen. I also wanted to read about any last-minute scrambling to make any edits or additions to the book since so much was going on with McMahon undoubtedly after Riesman submitted her final draft. 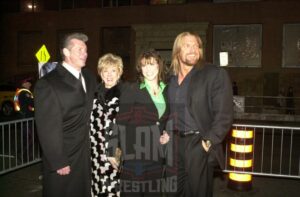 So, while this reader can’t help but wonder about the book that could have been, what Riesman has given readers should be viewed as a victory, a noteworthy contribution to pro wrestling journalism, and eagle-eyed insight into McMahon and his legacy. Especially in this case when McMahon’s legacy is once again in the spotlight and still being written.

The best way for me to end this review is to give both my sincere recommendation for this book and the last word to Riesman. She observed in the book’s Coda, bringing us readers full circle: “Storytellers have known the narrative power of unarmed physical struggle since Gilgamesh. In the millennia since, there have been countless apocalypses of one size or another, obliterating empires and entire ways of life. But wrestling endures. So do stories. So do performers. So do audiences. The world may end. But the ring never dies.”