Professional Wrestling Intellectual book anything but

It’s one thing for someone to have a high enough opinion of their writings to self-publish a book of their freely available internet wrestling columns via Amazon’s CreateSpace print on demand service. There’s little risk involved and if some wrestling fan actually decides to buy it, then the author pockets a little bit of extra money. Even if this person is not a good writer, if enough people have been exposed their work, then it’s understandable on some level. It’s another thing to make it a 400-plus page tome on 10″x8″ paper, name it Professional Wrestling Intellectual, and use blatant lies and distortions to make the writings seem like a bigger deal than they really are. 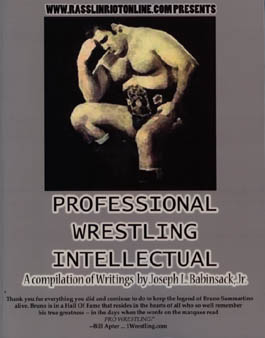 For those unfamiliar with Joseph Babinsack Jr., the author of Professional Wrestling Intellectual, he is a columnist for the Wrestling Observer/Figure Four website, which he describes in the introduction as “[going] for the big times.” While the Observer proper is definitely the top news source in wrestling, the web site is a bit more complicated. For years, readers who sent in longer emails written like an editorial would be presented as columnists. This includes friends of mine who had no idea that their emails would be prominently listed on the site’s front page as “[X Person] on [Y topic]” and someone who sent in results of AAA’s weekly television show typed in all capital letters. Writing for the Observer site isn’t a knock against anyone, but it’s far from prestigious.

There is another attempt is misleading the reader in the list of blurbs on the back cover, where Eric Bischoff is quoted as saying “Why the hell didn’t somebody tell me this sooner? Why did I have to hear it from some guy named Babinsack?” Bischoff did indeed say this, but it was part of a larger blog post where he tore into Babinsack for writing a column that the former WCW boss summed up as saying “that one doesn’t really need to actually have a job in a certain industry in order to be a part of that industry.” On top of that, the “about the author” page, mainly about his writing experience, includes a note that, “He had his picture on the back of a comic book (Cerebus #169).” On its face, it’s a peculiar piece of information to include, to the point that I mentioned it to a friend of mine. He directed me to a website with a scan of the issue in question, which features no mention or photo of Babinsack, much less on the back cover.

The original material in the book positions the text as a potential game-changer for “mainstream” wrestling fans, as Babinsack eschews WWE for the most part. Why these theoretical mainstream fans would pick up this obscure self-published book from Amazon, regardless of quality, is a mystery, especially since the book’s description doesn’t give any specifics as to the content in the first place. People unfamiliar with the author (who seem to be the book’s intended audience) would, based on the title, probably think that it was the latest entry in the string of sociology-themed wrestling books that have been released throughout the last couple decades such as Wrestling to Rasslin’, Professional Wrestling: Sport and Spectacle, Slaphappy, and Steel Chair to the Head.The attempt at presenting the book as an epic makes the fact that it’s largely a mess even worse. The various columns (none of which are dated) are divided into ten themed sections, but there’s often little rhyme or reason to the categorization. The “Controversies” section features several columns that are neither controversial nor about any controversy. There are sections for book and DVD reviews even though almost all of the other sections feature other book and/or DVD reviews. The layout is absolutely terrible, including a blatant formatting error on the front cover, many photos that are either squashed or stretched, inconsistent fonts, and even a screen grab of a YouTube video with the video controls not cropped out.

The vast majority of the columns are not well-written and several, while somewhat understandable for publishing on a wrestling website, have no business in a book. Why include a several page play by play of a match in lieu of explaining why it’s great, as a well as DVD reviews that often give opinions without detailing any sort of reasoning behind them? Other entries are similarly puzzling. There are two interviews with independent wrestlers conducted by email using a generic question list, including one where the subject responded in all capital letters. A piece about gaming addiction is included for no apparent reason and two different wrestling book proposals feel equally out of place since, well, they’re in a book.

The columns are generally full of spelling, grammatical, and factual errors that could have been easily corrected, if not at the time of the original posting then in the transition to book form. For example, Ed Whalen is described as the “conscious” of Stampede Wrestling. In a rather ignorant factual error, the very straight Adrian Streett is lumped in with Jim Barnett and Pat Patterson as successful gay men in the wrestling business due to his gimmick. It’s a wonder that Adrian Adonis, Gary Hart, Rico Costantino, and other wrestlers who played similar characters during their careers weren’t listed with them. Besides the easy to spot errors, many of the columns ramble, jumping from point to point in a disconnected manner. This is especially frustrating in the book reviews, as references to the books in question drop out of sight for too long.

It’s not all bad. I thought that the review of Jim Wilson and Weldon Johnson’s book Chokehold was rather well done. It was much, much more tightly written than everything else in the book and brought up some interesting points about Wilson’s story that I haven’t seen mentioned elsewhere. I also appreciate the effort to help out whatever independent promotion he can by reviewing their DVDs, though the unnecessary WWE bashing that goes with it can be frustrating.Professional Wrestling Intellectual is a puzzling book. Someone who’s familiar with the author would have already read these articles for free online, and even if they liked what they saw, there’s no reason to spend $20 plus shipping to buy them in book form. Anyone who’s not familiar with Babinsack is unlikely to buy the book and even if they did, they were probably expecting something completely different based on the title and vague description. Not only is it a poorly executed book presented disingenuously and in a condescending tone, but there’s not really an audience for it and no reason for anyone to buy it.

DAVID BIXENSPAN is a freelance writer and contributor to CagesideSeats.com who podcasts about pro wrestling at LoserLeavesTown.net. He eagerly anticipates Robocop’s return to professional wrestling.