Ed Chuman, a longtime wrestling promoter in the Midwest, has died at the age of 62. With his passing, the business has lost a colourful figure, and a great friend.

“He was a great guy,” said National Wrestling Alliance (NWA) attorney Robert Trobich in a release. “He’s one of those guys, who in a frustrating business, who made it fun. He was a character in every sense of the word.” 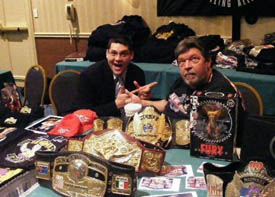 “For those who didn’t know Ed Chuman, he could come off as being gruff and rude; a real old codger,” recalled former NWA President Howard Brody. “But for those who really knew the guy, they knew that beneath his eccentricity was a person who not only told it like it was, but really who had a good heart. Ed was genuine and not afraid to tell you what was on his mind and if he disagreed with you, he’d tell you — in spades!”

Who else could portray the manager “Dr. Sidney Hack,” a chain-smoking, alcoholic physician for Carmine DiSpirito’s Mid-American Wrestling in Milwaukee? Or wrestle a bear? Or work as the mysterious manager Doctor X?

“He was a good guy. I have a lot of interesting/ funny memories about him when I was working indies in Wisconsin,” “Mr. Kennedy” Ken Anderson wrote in a Twitter posting.

For the last decade, Chuman was an NWA promoter, but he was always willing to help other promoters as well.

“Ed did so much to help Midwest area wrestlers get bookings around the country on shows run by other NWA promoters, and also ran his fair share of events himself here in this region, most notably at the rec center in Streamwood, IL. I’m glad to have been a part of a few of Ed’s “SHOOOOOWS!!” the past few years,” wrote SHIMMER promoter Dave Prazak. “He opened many doors to Joey Eastman over the years as well, appeared as part of his Totally Tool Wrestling shows, and gave Joey the chance to learn from the promotional end in Streamwood as well.”

“When I broke into the wrestling business, I was broken in by [Randy] Savage’s father, Angelo Poffo,” he told this writer in January 2009, talking about his short career as a professional wrestler. “One of the things Poffo drilled into me was that if you want to be successful, you surround yourself with talented people, and give them the ability to do their job. I took that very seriously.”

Case in point was Chuman belief that, with the development of the internet, there was a market for belts. So naturally, he sought out the best of the beltmakers, Reggie Parks. Business took off.

“Chuman saw the potential in what we were doing here,” Parks told the Arizona Daily Star in 2008. “He opened up a Web site and used the site for his business and also to promote our belts. Everybody in the world knew about us then.”

Born November 4, 1947, Chuman always had showbiz in his blood.

“I believe wholeheartedly in the proper presentation of a product. I’ve been in the entertainment business for 55 years, from being a performer to being a stagehand, to being a federally licensed pyrotechnician, to being a lighting designer, set designer, stage designer,” Chuman said. “There’s a lot that I’ve done in the entertainment business as a whole, and I try to apply that to the wrestling product. I believe you never give the fans too much. I don’t believe in eight, 10, 12 matches; I believe you give them seven solid matches and send them home.”

Based out of Chicago, he would promote many different events. When the NWA starting growing again in the late 1990s, he joined the organization, and his territory included Iowa, Wisconsin, Illinois, Indiana, Missouri, and Kansas. He would have satellite promoters everywhere.

“When the late Dennis Coralluzzo and I first appeared on RAW as part of the NWA angle in 1998, Ed was one of the first promoters to step up and inquire about joining the organization,” recalled Brody. “There were many times over the years that Ed wanted to quit the NWA and quit promoting and until I left the organization in January 2002, I had to talk Ed off the ledge a few times. Over time he took my advice on how to promote under the NWA banner (getting other promoters to use the name and pay the expenses) and in the end I think ran more shows than any other NWA member.

“Yet despite all that, the true measure of Ed will not be felt in wrestling, but rather in the people he left behind that he REALLY cared about — his wife and his daughter. There was much more to Ed than being a wrestling guy. He was a husband and a father and at the end of the day, that’s the guy who will be missed most by those who gave his unconditional love.”

For many years during the Christmas season, Chuman would don the red and white and be Santa Claus close to his Bloomingdale, Ill., home. In fact, the Chicago Daily Herald once pegged him as one of the “best Santas in the business.”

“I do it because of the kids, their great looks and faces,” Chuman told the newspaper.

For the last number of years, Chuman had been ill. His wife was an executive, “making decent money,” in his words.

“I’m an old fart. I’m 61,” he said in January 2009. “I was disabled several years ago, so I needed something anyway, to work with out of my home. Wrestling affords that to me. I go to shots that are close, run some of my own shots here that are close.”