B.C.’s All-Star Wrestling reaches into the past

Mark Vellios hopes that a hybrid of young and old will revitalize the B.C. wrestling scene and breathe new life into his All-Star Wrestling promotion.

The new approach begins the weekend of Jan. 22 and 23, when ASW returns to New Westminster and debuts in Abbotsford, respectively.

“It’s a big weekend for ASW,” said Vellios, who has been a fixture of the B.C. wrestling scene for years under the moniker of “Gorgeous” Michelle Starr. “We want to make things right and get local wrestling back in the area. We want to be able to have wrestling on TV every week again.” 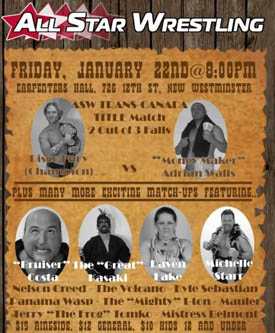 The Abbotsford show will be taped for future TV broadcasts as Starr hopes to bring ASW to the small screen, replacing his previous venture, Top Ranked Wrestling, which formerly had a weekly timeslot on local TV.

Vellios’ new experiment will combine a mix of young, up and coming talent and nostalgia in the form of legends of the B.C. wrestling scene from yesteryear.

Former stars such as Terry “The Frog” Tomko and Bruiser Costa will compete, taking on their younger counterparts, including Storm Wrestling Academy alumni The Kelownafornians, Collin Cutler and Adam Fedyk.

“We’re trying to mix in a lot of the names from All-Star in the ’80s with some of the newer names of All-Star,” said Vellios. “It’s a show with a lot of vets and newer wrestlers on the card.”

Tomko, the son of promoter Al Tomko (who ran the ASW promotion throughout the ’80s), will team with Vellios to face Team Japanada, who are managed by another familiar ASW face, “Vicious” Verne Siebert.

Bruiser Costa on the other hand, will be appearing on the west coast for the first time in 25 years.

“He was one of the bigger draws of All-Star Wrestling in the early ’80s,” said Vellios. “A lot of people remember Bruiser as the man with the $300 shirts. He was a great talker on the mic, that was his best quality, I believe. I wasn’t here when Bruiser Costa was here, he was a bit before me, so it will be a real treat for me to see him.”

Vellios believes that there’s still a spot for all these veterans over the age of 40 in today’s wrestling world, as is evident across North America and even in WWE and TNA.

“I guess as long as the guy remains active someway physically, there’s a spot for him,” he said. “Not necessarily saying Terry or myself or Bruiser Costa can hang with a guy that’s 20 years old, but I think we can put on an entertaining wrestling match or show.”

The title will be defended in best two-out-of-three falls matches on each show, a throwback to ASW rules of the past and the promotion will also implement the referee card system — yellow and red cards to be used at the referee’s discretion — as a homage to Stampede Wrestling.

“We’re trying to honour the past,” said Vellios. “What we want to do is bring up old memories and try to do that style also.”

Vellios had largely kept ASW out of B.C.’s Lower Mainland, since assuming ownership of the promotion in 2007, but recently decided to return to the company’s roots and run the area on a regular basis.

The hope is that the homecoming for the league, along with appearances by numerous grapplers from days gone by, will cause a renaissance for the B.C. wrestling scene, one that is undoubtedly needed.

Daniel Wilson has been a fan of wrestling in B.C. since his first show more than a decade ago and hopes that ASW’s January weekend is the start of something big out west.