Many pro wrestlers got their start reffing matches, but you don’t need many fingers to count the number of guys who’ve gone from grappling in the ring to officiating on the ice hockey rink. 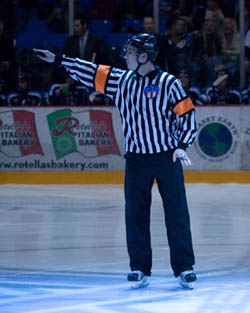 “In 2007-08, I was a head coach of a midget hockey team, and over the course of the season, I felt that the refs just didn’t do a professional job,” Wood said, explaining how his interest in officiating first started.

A friend of his mentioned a local beer league was short referees and Wood decided to give it a try. At 25 years old, he decided on becoming a full-time ref, and checked online to discover what he needed to do.

Wood would join a camp at the North American School of Officiating in Guelph, Ontario, which he described as an open tryout run by current NHL officials.

“I thought this might be my big break, jumping from the beer leagues to minor pro hockey.”

But just before heading there, Wood called Scott Brand, who’s in charge of the USA Hockey Officiating Development Program, for advice. As it turned out, Brand was going to be attending the Guelph tryouts and said he’d look out for Wood.

“So during my time at camp, I reffed a game, and in that game my supervisor was 20-plus year veteran Bill McCreary. After the game you have a meeting with your supervisor, and this meeting was very positive. At this time Bill’s son Mike was currently working for Scott in the program, and Bill went out of his way to introduce me to Scott. Once Bill said to Scott, ‘You need to take a good look at this guy,’ the rest was history.”

Brand hired Wood for the 2008-09 season, during which time Wood lived in St. Louis.

“The program has you spending countless hours behind the wheel going from town to town, city to city, ref numerous levels from Junior B all the way to pro hockey. This season my schedule has me working the Southern Professional Hockey League and the International Hockey League, mixing in some college and numerous junior leagues.”

Brand said that officials who have worked as long as three years or so can get promoted to the ECHL (formerly the East Coast Hockey League, any player signed to an entry-level NHL contract and designated for assignment must report to a club either in the American Hockey League or the ECHL), or the Central Hockey League (CHL). Brand pointed out Wood is among his upper echelon refs and could see a move up, depending on the needs of those leagues. 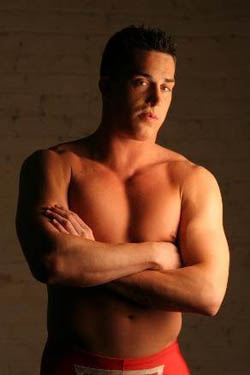 When Wood began refereeing in the U.S., he put wrestling on hold, as most indy shows took place on weekends, which was also when most of his games took place. He did, however, get back to wrestling, as well as playing softball, during the summer.

“In my summer last year, I wrestled for PCW [Winnipeg’s Premier Championship Wrestling]. It was a fun time and I loved working with the talent they have there. This summer I look forward to working for Danny Duggan’s CWE [Canadian Wrestling Elite] or maybe Mike Davidson’s new WFX [Wrestling Fan Xperience] promotion.”

Wood recently returned to Border City Wrestling to work out under Tyson Dux. The session revealed to him the differences between on-ice and in-ring conditioning.

“There are lots of differences — I can skate 60 minutes straight and not feel anything. But with wrestling, you’re bumping, getting hit, and if your body is not used to that type of punishment, it will let you know it doesn’t like it… Last night just showed me that, one, I haven’t been in the ring in quite some time, and two, in 2001 when I broke in with Vance Nevada, we got worked hard, but nothing compares to what I went through last night.”

“He did well and did not complain once, but had to be excused more than a few times to go throw up,” said Dux, who complimented Wood’s athletic look. “He’s a good guy, and it won’t take me long to see his potential.” 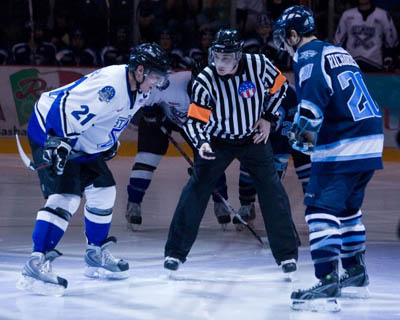 Wood has said wrestling for him is second-fiddle to officiating right now and that he is focused on moving up the ranks. But he also added he would be interested in promoting some shows in the U.S., a venture his boss Brand — a big wrestling fan himself — is also keen on.

“I was impressed,” Brand said of watching Wood’s wrestling DVD, noting his appreciation of indy wrestling. “I enjoy watching that level of wresting more than WWE, where there’s not enough wrestling and too much storyline.”

Wood has previous promoting experience as owner of Live Pro Wrestling. One advantage of working shows in the U.S. would be to eliminate customs problems, which have been a headache for a number of Canadian promoters trying to bring in name talent. Wood has personal experience with the uncertainties of who does and doesn’t get over the border to make a show. His promotion’s Winnipeg debut was undermined in January 2007 when TNA’s then NWA World Heavyweight Champion “The Monster” Abyss and Ring of Honor’s Colt Cabana were held up and unable to make the show.

Brand said he would take a harder look at the bottom line costs when the season ends in May. One thing the pair wouldn’t have to worry about is buying a ring, as Wood said he had connections in Minnesota to rent one. Brand said there are 73 hockey teams under his jurisdiction and a number of buildings would be available for very little cost. He noted he has many contacts around the Midwest for venues that range in capacity from 2,000 to 4,000 people.