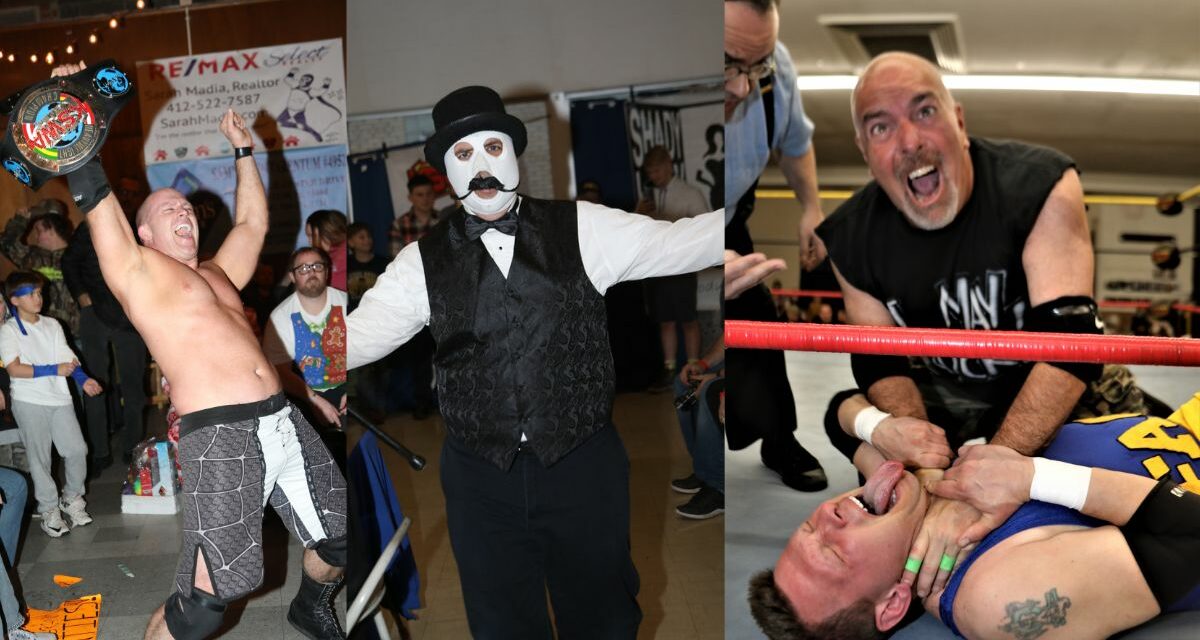 What started out as a way to celebrate the Studio Wrestling heritage in Pittsburgh has turned into an emotional, 15-year quest and one of the most prestigious events of its type.

The Keystone State Wrestling Alliance (KSWA) will host its 15th annual Joe Abby Memorial Tournament and Hall of Fame event on the afternoon of Saturday, June 11th in suburban Pittsburgh.

This year’s event includes a four-man tournament to determine the “Joe Abby Memorial Tournament” winner. Joe Abby was a Pittsburgh-based real-life “repo man” who also wrestled preliminary matches all over Western Pennsylvania during the famed WIIC Channel 11 Studio Wrestling days that lasted from 1958 to 1974. In 2008, he alongside Frank “Slip Mahoney” Durso were the first inductees into the KSWA Hall of Fame.

Since then, more than 40 inductees have been included in the annual ceremony. At first, inductees received framed 8x10s, but those certificates have gotten larger and more significant. Sometimes, in the case of Studio Wrestling fan-favorite “The Fighting Cop From Carnegie” Frank Holtz, Allegheny County Councilman Sam DeMarco took it upon himself to present a proclamation to his personal friend and wrestling hero. The event is never a “bring in a name and hand him a plaque” commemoration. Class of 2015 inductee James J. Dillon has said that “what they do in Pittsburgh is just as important as the WWE Hall of Fame.”

This year, two veteran Pittsburgh wrestlers were chosen for the Hall of Fame nod, their long-time manager (who has also been a Western Pennsylvania staple for more than 20 years, as well as (posthumously) a famed middleweight boxer who became a referee and influential member of the Pennsylvania State Athletic Commission.
Bubba the Bulldog still wrestles periodically for the KSWA, is an FM Morning Show host, owns and operates several Bubba’s Burgers restaurants in the region and has served as a high school baseball coach for his son’s alma mater. 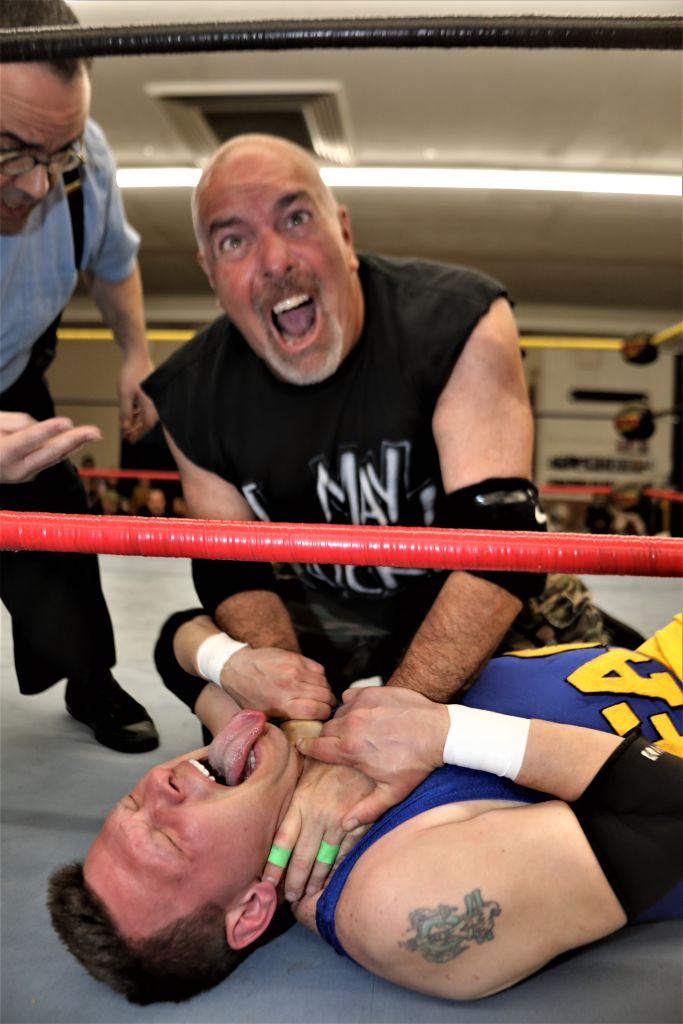 Bubba the Bulldog chokes “The Face of Pittsburgh” Lou Martin at a recent event in Pittsburgh. Photo by KSWA Hall of Famer Howard Kernats

For keen eyes of Shotgun Saturday Night and other then-WWF syndicated programming, Bubba the Bulldog may sound familiar. He worked a Civic Arena show in July, 1997 against JB Destiny before Monday Night Raw’s 220th episode. In July 2001, he also defeated Cory K as part of a WWF taping at the same venue. All in the same time, he worked for regional promotion’s like McKeesport, PA’s Pro Wrestling Express (PWX). The promotion had an early-2000s cable TV deal and Bubba joked that fans could “watch me on Shotgun Saturday Night AND on PWX later that same night!”

In 2001, Bubba and others, including fellow Class of 2022 KSWA Hall of Famer Dennis Gregory, would create the International Wrestling Cartel (IWC). That promotion would have great success under Bubba, and he would later sell the promotion. IWC is now the second longest-continually-running wrestling promotion in Western Pennsylvania, behind only the KSWA.

More recently and thanks to his involvement in Pittsburgh media, Bubba worked with the WWE and Stephanie McMahon in particular to help elevate Connor’s Cure. In 2012, then eight-year-old WWE fan Connor Michalek was battling medulloblastoma, a rare brain and spinal cord tumor. Bubba knew Steve Michalek, Connor’s father, and along with former WWE ring announcer Justin Roberts, helped Connor meet Daniel Bryan, Kane and other WWE Superstars. [Note: quite a few regional personalities have claimed to be a point person in the creation of that heartwarming journey, but Bubba has the corporate text messages to prove his involvement.]

Last Friday, Bubba was informed of his induction when KSWA Owner Bobby O and “Face of Pittsburgh” Lou Martin called into his 100.7 FM Bubba Show with the news. The surprise announcement left the usually rapid-fire Bubba speechless. After a quick commercial break, Bubba returned to the air, saying he “never expected anything like this in my career.”

Gregory and fellow new Hall of Famer Mayor Mystery were also surprised with their inductions, both via remote video meetings. 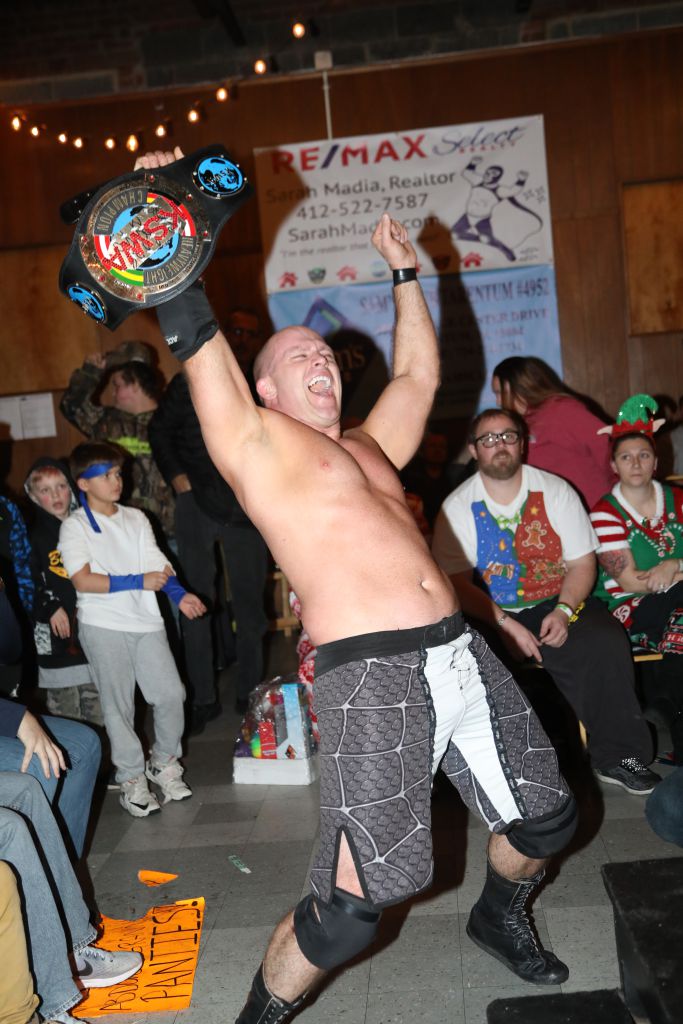 Dennis Gregory, who started wrestling around Pittsburgh the same time as Bubba, is one of the region’s most celebrated grapplers. In real life a military veteran who works with the Veterans Administration to this very day, Dennis Gregory has applied his trade in practically every promotion in Western Pennsylvania over the past quarter century.

Mayor Mystery is a classic, masked heel manager who carries a cane and is not afraid to use it. He is in his 21st year of hassling babyfaces and authority figures alike. 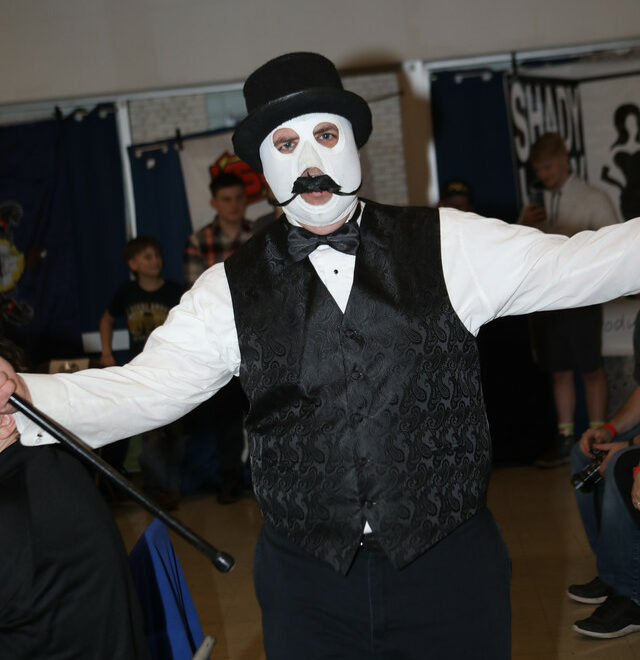 Andy “Kid” DePaul was known primarily as a boxer, but turned to refereeing once that chapter in his athletic career ended. He was a respected referee in Studio Wrestling that featured the likes of Bruno Sammartino, Dominic DeNucci, George “The Animal” Steele, “Battman” Tony Marino, “Jumpin’” Johnny DeFazio and Bobby “Hurricane” Hunt. DePaul, who won 82 of 92 amateur fights and was a regional Dapper Dan Golden Gloves champion, had a 27-8-3 record as a pugilist. After Studio Wrestling shuddered, he became a Pennsylvania State Athletic Commission official in 1990 and served for more than 20 years. He passed away in September 2014, at the age of 85. 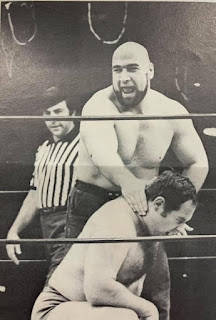 Andy “Kid” DePaul is the referee during a Studio Wrestling match in the 1960s.

The KSWA Hall of Fame is an eclectic mix of wrestlers and personalities all with distinct ties to Pittsburgh (and in the case of Class of 2017 inductee and Keystone State resident Bill Apter – who also received a proclamation from Pittsburgh’s Mayor Bill Peduto and Governor Tom Wolf) and Pennsylvania. Brownsville’s Bill Eadie, Pittsburgh’s Donna Christianello and real-life niece Angie Minelli, and “Luscious” Johnny Valiant are some of the recognizable names. Sammartino, DeNucci, Steele and Marino were all added over the years, as well KSWA stalwarts like “Mr. Tenacity” Tommy Faime, “Big” Mike Malachi, Bobby Badfingers, Preston Steele, T-Rantula, Cody Michaels and Lord Zoltan. Referee Shawn Patrick, who celebrated his 30th anniversary in the ring, was surprised with an induction in the same class as his friend and fellow Pittsburgher “the only guy smaller than me in wrestling” the late Brian Hildebrand.

Even during COVID shutdowns, the KSWA held a “remote” Hall of Famer ceremony in 2020 and announced a 2021 class that included wrestler-turned-promoter Ace Freeman, tag team specialists The Sicilians (Lou Albano and Tony Altimore) and KSWA original La Lucha.

This year’s event will be held at Three Rivers Harley Davidson in Pittsburgh’s near north hills. The Joe Abby Memorial Tournament winner will also be crowned on June 11th.