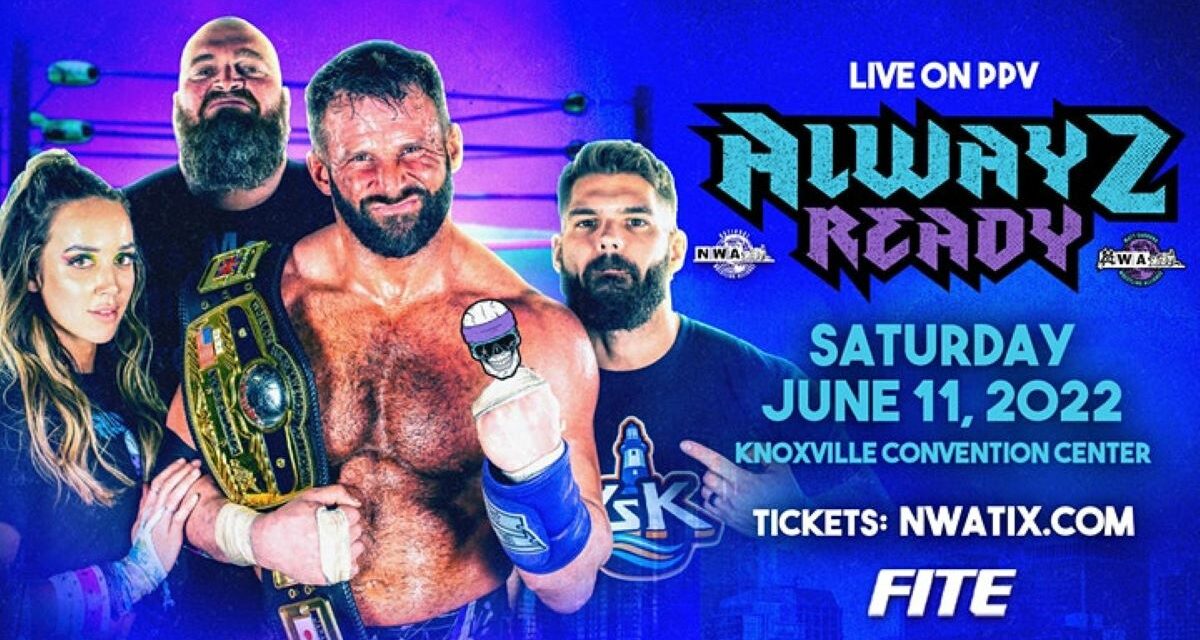 We are a few days away from the National Wrestling Alliance offering their latest pay-per0view, and just like their current holder of the Ten Pounds of Gold, Matt Cardona, the card is Alwayz Ready to deliver to the fans.  No double PPVs like The Crockett Cup, but this show looks to be packed top-to-bottom with lots of talent and advancing storylines surrounding their major titles.

With that, we at Slam! Wrestling will guide you along for the matches and what to expect.  So if you’re on the fence about getting/watching the PPV this Saturday, June 11th, on the FITE.TV subscription service, this should help you get an idea of what to expect, starting with…

The Story So Far:  Since winning the Ten Pounds of Gold from Trevor Murdoch at the last PowerrrTrip, Cardona has proven to be a champ that will do anything to keep the Ten Pounds of Gold.  Nick Aldis attempted to win the belt at the Crockett Cup, but due to shenanigans by his Cardona stablemates, including his wife Chelsea Green, Cardona keep the belt due to a disqualification.  Aldis has since made it a personal vendetta to get the belt by any means necessary, and has gone through various members of the Cardona family to get what he wants.  This now leads us to the main event, where Aldis wanted to take on Cardona in a steel cage match, and Cardona countered the proposal with a death match as he is the “Deathmatch King” (and that sound you heard was the thousands of GCW fans complaining that I referred to him by that moniker).

Cardona tweeted out a while back that he sustained an injury at a GCW show, but promised fans he would be at this PPV, despite canceling other dates.  It looks to be some type of elbow injury, but as far as his involvement, with the stipulation of the match yet to be announced, he is still looking to defend the Ten Pounds of Gold.  My booker sense is tingling and through clever storytelling, along with The Power of Douchenozzlery™, Cardona will still hang on to the title, and Aldis will be knocked down another peg.  I mean, it’s not like the NWA is going to make up an interim title tournament while he heals up and keeps the belt.

Also, as an aside, Cardona has often cited “The Franchise” Shane Douglas, and gosh damn if he isn’t living up to the former Triple Threat wrestler.

The Story So Far:  As of this writing, Kamille has held The Burke for over a year, and there has yet to be anyone in the NWA women’s division that has been able to topple The Brickhouse.  Kamille has even gone so far as to cut promos proclaiming she will be a one-time champion because no one is on her level.

Since leaving All Elite Wrestling, King has found new life and new purpose in the NWA and cemented her position as the number one contender for the title.  Both wrestlers are the same height and each has their brand of physicality.

Predictions:  Kamille has been the face of the women’s division, and that claim of being a one-time champ is a less blustery promo and more a statement of fact.  As the list of challengers is a bit thin on the roster, the fact that King can easily match up with The Brickhouse makes this a must-see.  I see that this will go down to the wire, and an error by King will ensure Kamille keeps up her successful title defense for a while longer.

The Story So Far:  The Man-ster Tyrus has been on a winning streak of his own since claiming the Television title from Da Pope.  At six title defenses, Tyrus is on the verge of earning a seventh win and due to the stipulations of the Television title, that would guarantee him a shot at the Ten Pounds of Gold at a future date.  But the New York Times bestseller has wanted competition, and so he instituted a Slam Challenge.  Challengers like Cyon tried and failed (more on that later), but it was Big Strong Mims that managed to slam the big man, and he’s punched his ticket to earn a shot at the belt.  But on the latest  PowerrrTrip 2, Mims got in the ring with Tyrus but got ambushed by Cyon, who is the “son” of Tyrus’ manager, Austin Idol, and they injured Mims’ arm prior to the PPV.  The question remains what shape Mims will be in this Saturday to compete for the Television title.

Predictions:  I find the whole “Idol is Cyon’s father” so hackneyed that not even George Lucas would want to add that to his Star Wars prequels (and yet he included Jar Jar Binks, but that is a harangue for another day).  But it is that storyline that I feel will overshadow this match, and Mims has shown to be a huge fan favorite that his work will get diluted by this.  On the other side, should The Son of Austin Idol™ interfere, Mims has a nice feud to focus on for a while.  So that is what I feel will happen, and Tyrus will get his seventh win, and lord it over us puny humans to the next Fox broadcast.

The Story So Far:   “The Dane Event” has kicked up his work a notch since winning the belt in douche-tastic fashion against Anthony Mayweather at The Crockett Cup, and he has shown he will defend the belt when the advantage is in his favor.  But The Masterpiece himself looks to get back the gold and become a three-time NWA National champion.  Not even Dane’s furry vest will be enough to hold off Adonis’ Masterlock submission.

Predictions: This looks like a pick ‘em, to me, because both men would do well to hold the National title.  There’s a thought that Dane could keep the belt due to shenanigans from his lawyer, Chris Silvio, esquire.  On the other side, Adonis could win because of interference from a returning Anthony Mayweather, and that would be awesome to see the former War Kings renew their rivalry again.  On this one, I’ll deviate and say Adonis comes out on top with the belt.

The Story So Far:  Mecha Wolf and Bestia 66 have managed to hold all contenders at bay and have been great representatives of tag team action in the NWA.  They even managed to hold off Dem Boys, The Briscoe Brothers, to retain the belts.  But the tag action has other contenders waiting in the wings, like the Commonwealth Connection.  While Doug Williams returned to active competition by teaming with Aldis, the picture changed when The National Treasure had to focus on Cardona, and that left Williams without a partner.

The son of the former British Bulldog has proven to be a nice addition as the power to compliment Williams’ style of technical catch wrestling.  That might be all the advantage needed to stop the lucha libre force of La Rebelion.

Predictions:  This is another pick ‘em for me, and both teams make the case for why they should hold the tag titles.  Since this match was thrown at random without any buildup, I think I’ll take Bestia and Mecha to hold the titles a little longer, but that could motivate the Commonwealth to go hard for the title at a later date.

The Story So Far:  Homicide has shown to be a perfect champion to raise the status of the resuscitated belt and has been a fighting champion in the junior heavyweight ranks.  PJ Hawx of Hawx Aerie is the latest challenger for the belt, and this is a huge opportunity to figure into the title picture.

Predictions:  Yeah, I like the kid, but I think he needs something more before holding the belt.  Even if his dad Luke Hawx is in his corner, PJ will come up short against The Notorious Legend.  But if something happens between the father-son duo during the match, that can add intrigue to them breaking up and the younger Hawx going solo.  Just a thought.

The Story So Far:   Murdoch has not been himself since losing the Ten Pounds of Gold.  While he has been brutal in the ring, Murdoch has been a shell of his former self.  Stevens noticed this and tried to snap him out of it, all the while dealing with his own weird persona changes that make moon Knight look well-adjusted (watch it, on Disney+, kids!).  As if that wasn’t odd is the fact that on a recent POWERRR episode, Stevens told May Valentine he was walking away from the squared circle.  So this could be his final match.

Predictions:  When I last spoke to Stevens, he confirmed he was on a handshake deal with the NWA.  He does other things outside of wrestling, so I’m believing this is the end.  Or it could be work, for all I know.  Either way, this match might be the impetus to snap Murdoch out of his funk and get him back in the title picture once again.

Simply put, Kay and Belle have been dominant as tag champs, and the teams that come to challenge them have been non-existent or slapped together at the last minute.  Also, it bears noting that Pretty Empowered faced The Hex at Crockett Cup, and they came up snake eyes.  Unless they have something else to give them a clear advantage, expect that The Hex hold the belts.

Two things:  The former Dexter Lumis still has a creeper ‘stache, and this is a match where he debuts in the NWA against Bob Kapur’s Favorite Wrestler™.  Simply put, give the creepy bastard (apologies to Marty “The Moth” Martinez) his due and the win.

This is…confusing.  Markova has been billed as a big deal in the women’s division, and her booking of late has been lackluster.  Also, she is being managed by Terrell, and that hasn’t exactly set the wrestling world on fire.  As for this match, the big draw is that La Wera Loca is in the NWA, and Markova will get another defeat.  Whether Taya Valkyrie stays is another story, but one thing’s for certain:  the former Frankie Monet is getting a better deal than her last employer.  Prove me wrong.

Three-way Match: The Fixers (Jay Bradley and Wrecking Ball Legursky) vs. The Mortons (Ricky and Kerry Morton) vs. AJ Cazana and TBA

The Fixers have been an entertaining tag team in the NWA, even if they’re aligned with Colby Corino.  Ricky and Kerry Morton have run afoul of The Fixers as they tried to get to Corino, so that part makes sense.  Cazana is a solid worker but hasn’t had much of a tag team run since coming to the NWA.  Who ends up as his partner remains to be seen, but the overall prediction:  Fixers Rule!

Between that and Bully Ray coming to the NWA for guest commentary (which is better than Austin Idol, let’s not lie) we’ll have more in store for the PPV.  So be sure to subscribe on the FITE app and then come back here for the recap goodness.