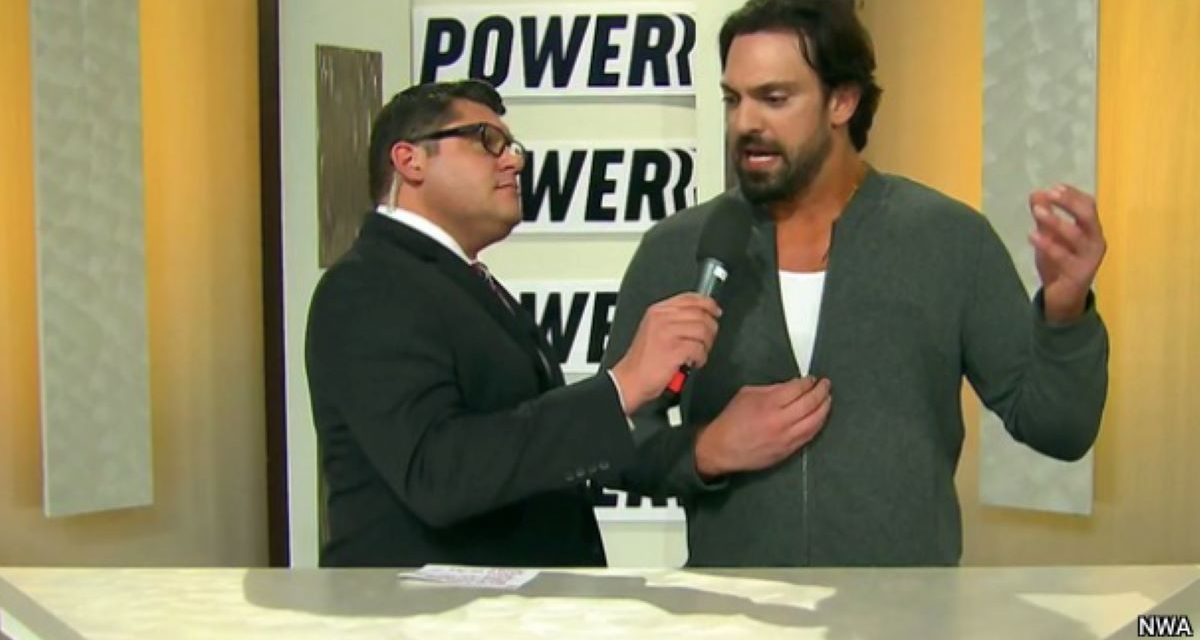 Few wrestlers in the modern era have captured the attention of fans quite like Aron Stevens. Whether it’s putting on a robe and coming to the ring with classical music, being a stunt double, wearing a Liberace outfit, or a karate gi (excuse me, it’s pronounced “Ka-Rah-Tayyy”), you bet that the former Damien Sandow will commit and gives fans their money’s worth. It’s also expected that he will do anything, and say anything outlandish.

But fans of late have seen a different side of Stevens, almost reflective. The new change started at the beginning of the year with the NWA PPV, Back for the Attack, almost three months after his tag title win with his surprise partner, Kratos, on an episode of UWN’s Primetime Live.  SlamWrestling.net asked Stevens to discuss his mindset during those months between the pay-per-views. “Yes, well, it’s funny right?  As the world has found itself in a very interesting and unique situation, professional wrestling is absolutely part of that and with the uncertainty of everything,” he said.

“To me, you know, I am kind of a different animal when it comes to how I prepare for things and how I view the entire wrestling industry to where, especially after leaving the WWE, where it was pretty much every day it was a grind. I barely even had a personal life, or any time to myself or anything like that,” Stevens said, elaborating. “I have put wrestling in this area of my life where when it comes time to actually do it and perform, I will put everything I have into it then, and I can’t worry about like, ‘Oh, when’s the next time we’re going to get back in a ring? When is this going to happen? How is this going to happen?’ It saves me a lot of stress. It saves me a lot of anxiety and it just it allows me to be 100% present with what I’m doing with whatever it is.”

And it was during this time he had found out of the passing of his friend and tag team partner, The Question Mark aka Jocephus aka Joseph Hudson. “It was the situation where, yeah, we’re tag team champions. And now I’m wrestling Nick Aldis for the World Heavyweight title. The wrestling business is always unpredictable, right? And it’s funny, the world is following suit now,” Stevens wryly chuckled. “So I just simply again, ‘What is my assignment? What am I doing?’ I need to go do this to the best of the ability and I have always relied upon my training, my instincts, and the ability to kind of have that switch, when the red light goes on, I know what I’m capable of and I just go do it.”

Since Hudson has been credited for re-sparking his love for professional wrestling, was there a specific moment? Stevens recalled a time when Hudson had done an autograph signing, and he was getting a long line of people, and major props from not just fans, but also veteran wrestlers. “He had never experienced that before, and because he has been such a good friend of mine. Personally I kind of realized, like, for the first time like, ‘Wow!  This is really cool that he’s able to experience this.’”

That moment also made Stevens take stock as well. “I had to stop and look at my own self in my own life and be like, ‘You know, what? I’ve kind of been a brat. Like a spoiled kid because I’ve taken that relationship for granted.’ What Josephus did is he made me not take that relationship for granted anymore. And he made me want to be my best self.”

Hudson did more than that, according to Stevens. “He made me okay with saying, ‘I’m a wrestler.’ He, in essence, reconciled, my relationship which was a very broken relationship with the wrestling industry. That was something I never ever thought I would kind of have healing. And I thought that was a relationship that I would always be dead. That’s something that I owe him and I’m forever in his debt.”

Now Stevens is in a different relationship with Kratos as the NWA Tag Team champions, albeit a contentious one on NWA Powerrr. How did that partnership come about?  “I met him briefly at [UWN] PrimeTime Live, because I did a lot of the production on Primetime Live. I remember he did a match, and I came back, and it was like, ‘Wow, dude!  You’re really good.’ And that was it. Then the next time I saw him we were, you know, the tag champions.” 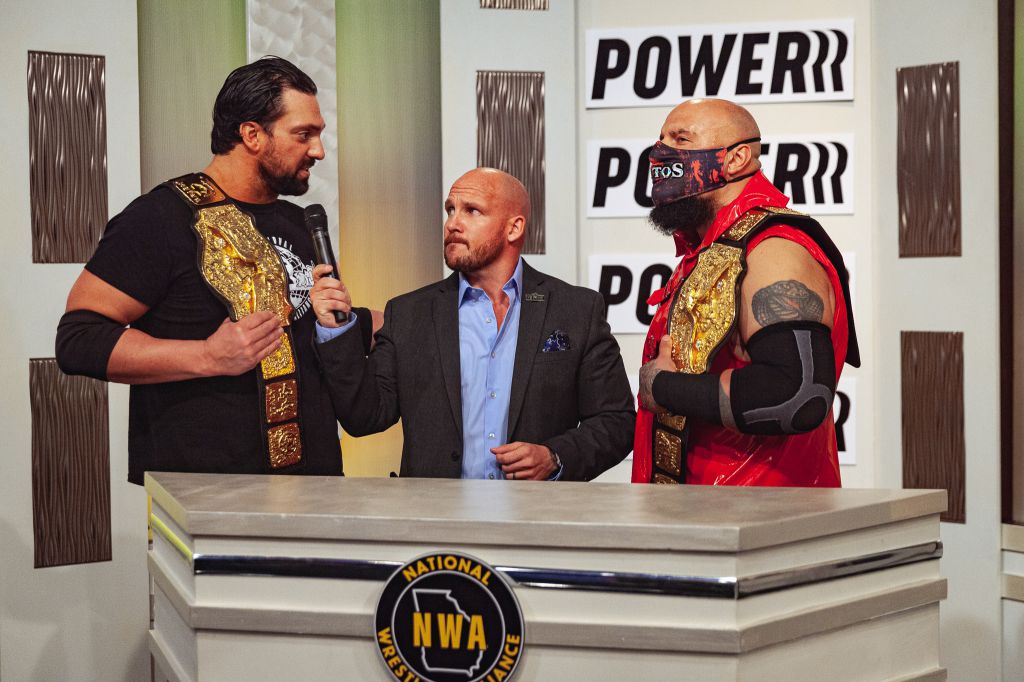 Stevens was very complimentary to Kratos. “In my opinion, he is so skilled in so many different ways, and [Kratos] understands the business, is a fan of the business, and is a student of the business.” And that’s why, despite the moments of friction in the squared circle, it still works. “We trust each other as professionals in and out of the ring to add to the element of, ‘Okay, there’s a little bit of a mismatch here, but they are essentially on the same page, because they’re still winning. That’s how we do it. So that’s about as real as you can be in terms of the authenticity to where nothing we do will look so contrived.”

As of this writing, Stevens and Kratos will put up the belts against the team of La Rebelion (Bestia 666 and Mecha Wolf) at NWA 73. It will be Sunday, August 29, at the historic Khorassan Ballroom of the Chase Park Plaza in St. Louis. It’s a historic location for a historic show.

“It’s one of those things where looking back on my career where I’ve been fortunate enough to wrestle in every major arena in the world, from the O2 Wembley Stadium, or the Wembley Arena, Madison Square Garden, in all these different cool places and everything. The history of the industry is something I’ve always been fascinated with and loved, and The Chase was one of those areas that no one thought that was an option,” he said. But with the strides and word of mouth of the NWA shows, Stevens speculates that changed some thinking. “With the new revamped, revitalize NWA, I think that the people at The Chase saw that and they saw what the NWA was and is, and they decided to go back there.”

From this point, you can hear the pride and joy Stevens gets talking about it being involved in this time in wrestling, especially for the NWA. “We are a group of gals and guys that are there because we were picked to be there, and it’s not just because of what we can do in the ring,” he said. “There’s a bunch of free agents and it’s an exciting time in pro wrestling. This is one of the most exciting, unpredictable and cool times to be in the wrestling business because anyone can show up anywhere.”

As for the locker room of the NWA, Stevens noted, “To be a part of the NWA, there is a certain criteria and it’s knowing the history of the business. Being able to work a very physical style in the sense of… we have luchadors, we have brawlers. We have all different kinds of people, but at the end of the day, when you’re at those Powerrr tapings, you’re seeing people are making contact [and] people are getting into it.” 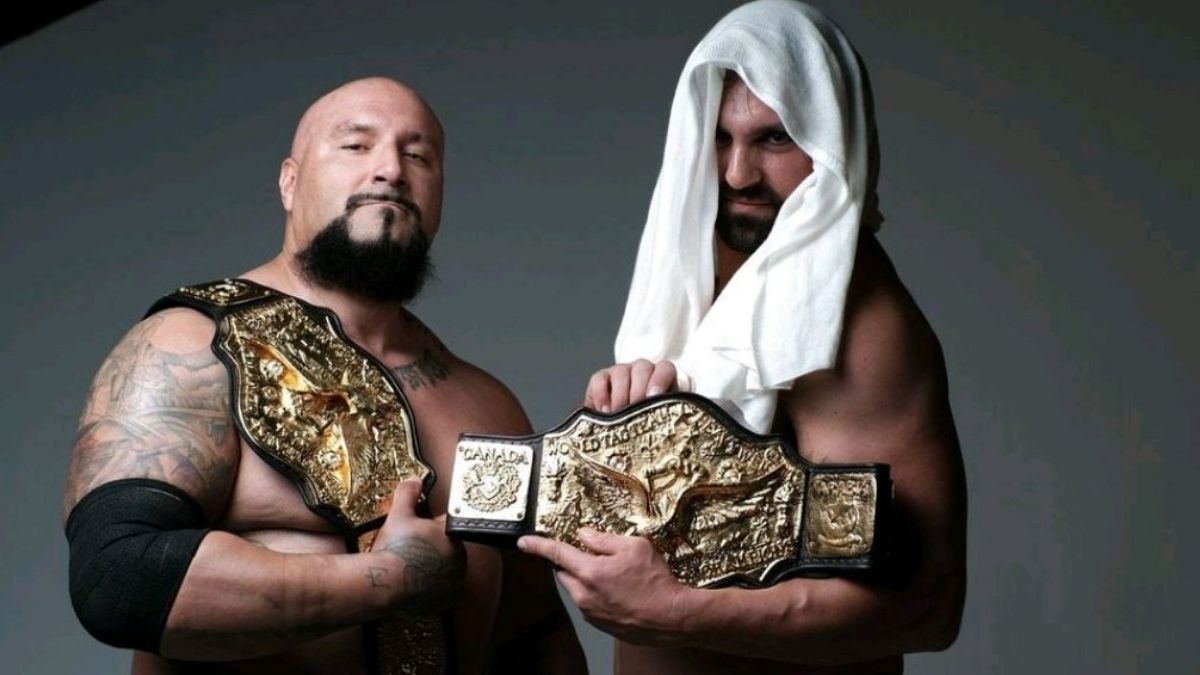 Not only did Stevens praise the talent and owner Billy Corgan, but also some of the unsung heroes in the back, like the Talent Relations Director, Pat Kenney (the former Simon Diamond of ECW/TNA fame). “I cannot begin to describe the amount of respect that Pat has from the locker room,” Stevens said, “and just the human being that Pat Kenney is. You know, he’s had an amazing career, but the human being he is, in my opinion, trumps any of that.”

Stevens told a story where he was at tapings was looking for some more guidance in his segment. “I went to Pat. Pat was the first guy I’ve ever gone to and said, ‘Hey Pat? I’m a little lost right now. What do you think?’ And he helped me, and he was there. And that is that meant so much to me that he was able to do that.”

As of this writing, Stevens has a handshake deal with the NWA. When asked to comment, Stevens didn’t hesitate. “I do. Okay, but you know what? My hands, they mean something. So who knows how long I’ll be in the NWA? Who knows how long I’ll be in pro wrestling? But if I look you in the eye and I say, ‘Hey, this is what I am. I will make everything right that I say I’m going to, you know, as long as I’m breathing oxygen.’ And that’s…that’s just who I am, and it’s one of those things that I will let my actions speak for themselves. And again, you never know what the future holds. I would absolutely love to end my career in the office.”

And for future plans?  “So I’m going to be filming up in the Catskills. And then from there I’m going right to St. Louis. I’m going to try to be there for [NWA] Fan Fest.”

What an exciting time to be a wrestling fan, or a wrestler like Aron Stevens. Reflect on that.