AEW Dynamite: Chris Jericho lays it all on the line, CM Punk teases another arrival 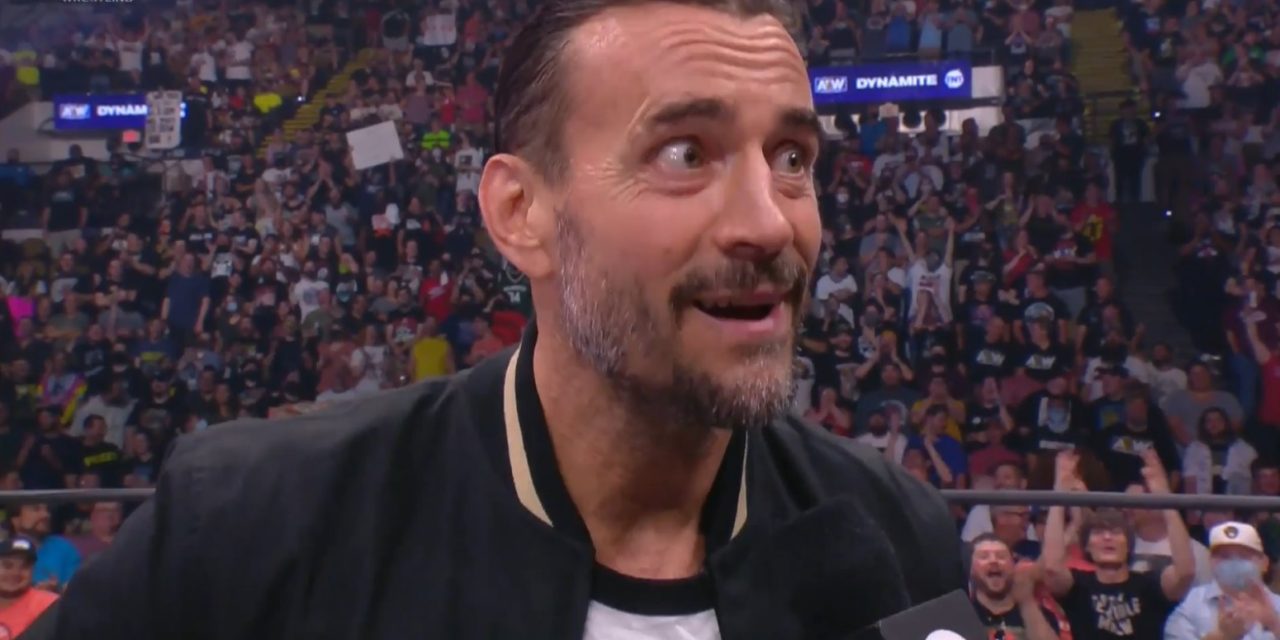 So, not much happened since the last episode of AEW Dynamite, right? Oh, wait. There was one thing. Someone who was away from wrestling for a while came back to the fold in his hometown? Something like that? But we kid CM Punk. It’s good to have you back, and it’ll be great to see you on Dynamite tonight, even though it’s not going to be in a match. There will be time enough for that, so for now, let’s change that dial to TNT and head to Milwaukee.

There’s so much going on in AEW right now that it would be easy for a feud like this to slip through the cracks, but the risk is lower since Cassidy remains very over with the fans. In fact other than Adam Page, he’s probably the performer to benefit the most from the return of live crowds and Dynamite touring the country again. Jim Ross mentions several times what a veteran Hardy is, which is like a nicer way of saying he’s old. Hey, we’ve all been doing this a long time, eh J.R.? This match goes a lot longer than one might expect from an opener, though that makes it feel a bit more important as well. Cassidy wins and Hardy ends up quite bloody.

Malakai Black agrees with Arn: Brock Anderson is in over his head. He gives Brock a chance to roll out of the ring right when the bell sounds, but something tells me he’s not about that life. Oh wow, Black says he’ll take out his anger on the entire Nightmare Family too. As one does, I suppose.

“Judas” is back in effect, but it figures to herald the arrival of a somewhat humbled Chris Jericho, making his first appearance after tapping out to MJF during his final Labour of Jericho. The Demo God notes that everyone in AEW is celebrating this week, except for him. While he’s distraught at losing for a third time to MJF, Jericho wants one more shot at him at All Out — and if he loses, maybe he doesn’t deserve to be in AEW any more. If MJF wins, Jericho says he’ll go to commentary on Rampage full time, because he’ll never wrestle in the promotion again. While MJF promised himself he would never wrestle Jericho again, he comes out to explain his thinking. Namely, that though tapping out Jericho was cool, ending his career would be legendary. That means he accepts the challenge for All Out, but he says Jericho should think carefully, as he’s putting the

The Varsity Blonds know what they’re up against facing the Lucha Bros., but they feel like their goal has bonded them the same way brothers are. Or words to that effect. They’ll find out soon, as their match is up next.

The Young Bucks and Jurassic Express are both interested observers here, and I like it, as it gives the match some real stakes. The AEW tag team division has always felt important, though, and that’s to the promotion’s credit. I’d also forgotten how much I need Rey Fenix in my life since the Lucha Bros. haven’t wrestled all that much on Dynamite as of late. But they still very much deserve the spotlight, and they’ll advance to face Jurassic Express after winning here.

Jurassic Express steps into the ring to shake hands with Lucha Bros,, but the Bucks try to start something between the two teams. It goes poorly, with the two contending teams showing each other respect and joining forces to make the champs and the Good Brothers look silly.

It’s time for a Chavo Guerrero promo. Well, it’s really an Andrade El Idolo promo, but with a healthy dose of Chavo.

The announcers put in the work to put over Hayter as a big addition to the roster, and a win over Red Velvet would help reinforce that idea since she’s been getting a pretty healthy push recently. Hayter nearly turns Red Velvet inside out with a lariat, so mission accomplished.

Kris Statlander isn’t about to just let Baker and Rebel beat up Velvet after the bell. That’s a good face.

The Dark Order doesn’t seem to be on the same page right now, with fingers being pointed between Evil Uno and Alex Reynolds. Alex gets upset and walks off, blaming Uno for driving Page away. Cracks in the foundation of the Dark Order? Say it ain’t so!

Tony Schiavone is almost as excited as the fans to introduce the man of the hour in professional wrestling, CM Punk. Like he did on Rampage, Punk puts over the opportunity to work with AEW’s vast roster of young talent, but he also wants to prove to himself that he can still be the best in the world. In Darby Allin, in particular, he sees himself when he was younger, which is why he wants Darby to be the first test he faces. Punk says hello to his wife at home before calling it a segment. Nothing else really needed, hit “Cult of Personality” again. Oh, it’s also worth mentioning that when fans start in with a “Yes!” chant, Punk responds by saying that’s somebody else’s gimmick and they might need to be a little more patient. Heh. Indeed.

Miro wants someone to bring him Eddie Kingston, so maybe somebody should get on that.

My son is arguing with me about which member of the Wingmen is JD Drake, making me unsure if that’s a positive since he at least kind of knows who the Wingmen are, or a negative since there’s confusion about who’s who. Since Mox and the Mad King are sort of wingmen themselves to Allin here, one wonders if Moxley might be headed for a heel turn soon. One guy who is already a heel is Danny Garcia, who lays out Darby after the bell and then retreats to safety.

The Bunny wants Tay Conti to join the Hardy Family Office, gets slapped in the face when she refuses, and hostilities commence. Referees, please separate these ladies.

It appears Cash Wheeler is still recovering from his hand injury and isn’t sure he’ll ever be the same. But FTR still wants one more match, and I’ll give you one guess who it’ll be against,

If turnabout really is fair play, then it’s fitting to see Kenny Omega get interrupted while cutting a promo. Christian Cage is the interrupter in this case, airing footage of Cage wrestling Omega in his first televised match years ago and then getting fired by Callis afterward. Also, Kenny was only 10 years old at the time? Damn. Callis gets brave and starts insulting Cage, which turns out to not be that brave since he has Kenny and their goons backing him. A four-on-one beatdown breaks out, but the Elite Hunter, Frankie Kazarian, rushes down to drive off the bad guys.

Only one person was willing to challenge Moxley for his NJPW belt at All Out, and it was … Satoshi Kojima! Welp, you’ve had a good run, Kojima-san.

Either the graphics peeps made a mistake or they let Aaron drop the rogue ‘w’ from his last name. I hope it’s the latter. Also, the Gunn Club wins this match while Marshall is jawing with Paul Wight. Funny.

Winners: The Gunn Club (no, really)

Dan Lambert of American Top Team is still running his mouth at … millennials? Gen Z? It’s not 100% clear, except that he is presenting the Men of the Year as Real Men™. I finally see where this angle is going.

Arn Anderson admits that his son is in over his head, praising his guts but warning him that he’ll have to pull out everything he has to prevail in tonight’s main event.

Well, Black wins this one as we all expected, and while it’s not quite a squash, it’s not exactly a showcase either. Black goes for a chair after the bell, and when AA climbs in to defend his son, Malakai greets him with a kick to the groin and a roundhouse kick.

Someone needs to come to the aid of the Andersons, and it turns out to be their Nightmare Family teammate Lee Johnson. Better than no one, one supposes. That’s all for tonight; don’t miss Rampage on Friday, and we’ll see you in seven!

Let’s start with the fact that after the CM Punk episode of Rampage less than a week prior, anything that happened tonight on Dynamite was bound to be a bit of a letdown. That was certainly the case, as the show has pivoted toward full All Out promotion mode. That’s not a bad thing per se, and the PPV is shaping up to be very promising, but this was mostly a by the numbers affair with a less than exciting final segment. Still glad to have Punk on hand, however, and maybe Daniel Bryan soon as well.