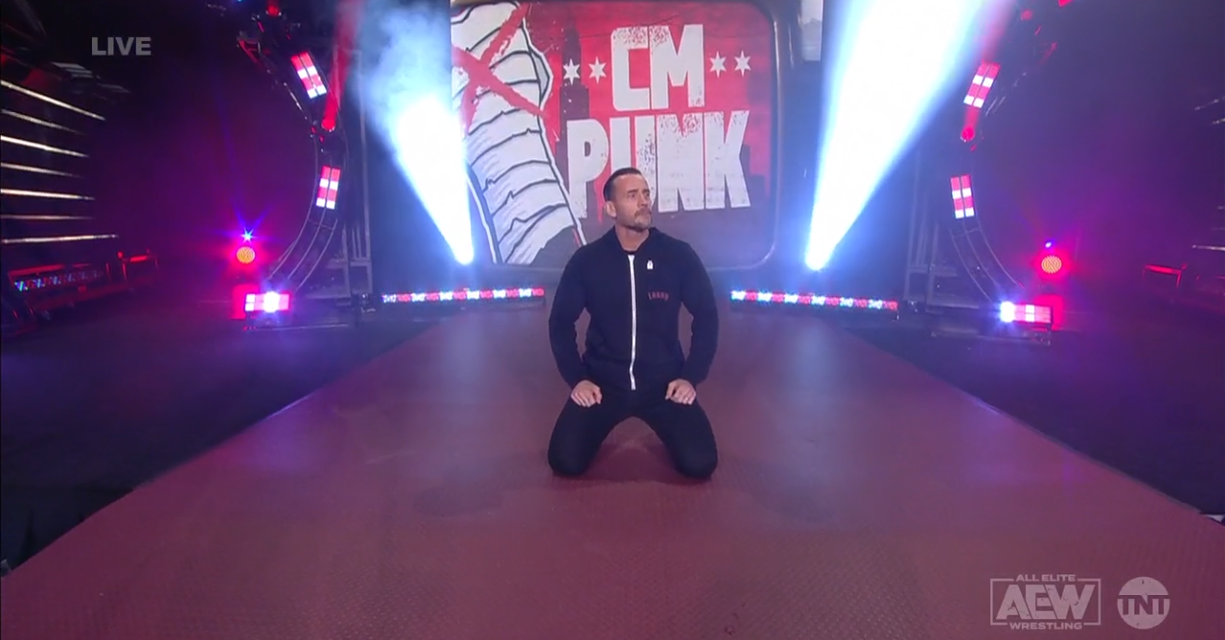 Even though this is the second episode of AEW Rampage, tonight is being billed as “The First Dance”. It’s a play on the Michael Jordan “Last Dance” documentary, seeing as AEW is in Chicago tonight. Let’s cut right to the chase though. One of the worst kept secrets in recent wrestling history is that CM Punk is showing up tonight, and if he doesn’t, the internet is going to be big mad.

The crowd in Chicago wants CM Punk. Cult of Personality hits and they blow the roof off the United Center. Punk takes it in, kneeling atop the ramp. Fans are crying! Punk is hugging people and jumping into the crowd!

Punk finally hits the ring with a microphone in his hand. He hasn’t planned on what he was going to say because he needed to feel the Chicago crowd. Unfortunately, Punk says we can’t get to everything tonight, but the good news is that he isn’t going anywhere and there is plenty of time. Punk says if he made us feel disappointed or let down; he understands. He was never going to get healthy though if he stayed in the same place that got him sick.

Punk wants to tells us a story. He takes a seat in the middle of the ring, talking about Ring of Honor and loving professional wrestling. He cried when he left RoH because that was the day he left professional wrestling, but today he has returned. He’s back for the young guys, like Darby Allin for example, who is watching with Sting high in the rafters. Punk lets Allin know that the most dangerous thing he can do is wrestle CM Punk in Chicago. He will see him September 5th at All Out.

Christian Cage lets the Young Bucks know that they won’t get any help inside of a steel cage. He wants Kenny Omega to know that he is going to take his AEW title at All Out.

Matt Hardy jumps to the apron and Marko stunt goes after him. This nearly cost Jungle the match, as he get rolled up but is able to kicks out. Private Party goes for Gin and Juice, but Jungle boy counters in mid-air with a DDT. Luchasaurus and Jungle Boy hit the Jurassic Express on Quen and cover to get the pin.

Don Callis calls the win a fluke. Kenny Omega says this show was set up for him and at All Out Christian Cage will wish he never came back.

The two lock up with Jade towering over Hogan. She shove Hogan into the corner, but Kiera strikes, knocking Jade back. Hogan runs right into a big boot. She picks Hogan up and drops her with her finisher to get the pin.

Mark Henry interviews Daniel Garcia with 2.0 and Jon Moxley on separate feeds.  Mox is none too happy that 2.0 jumped him on Wednesday.

Mox takes the fight to Garcia, beating him into the corner and then tosses him across the ring with a back suplex. A kick to the chest knocks Garcia to the mat. Garcia with a low drop kick to the knee and follows with a leg sweep. Garcia looks to work over the knee and then applies and ankle lock. Mox counters into an arm bar, but Garcia forces him to break the grip. Moxley with a German suplex. Daniel counters another Garman with a knee bar. Moxley is able to get to the ropes. Garcia is turned inside out with a clothesline. The two trade shots in the middle of the ring, until Mox unleashes a flurry of head butts. Mox wants the Paradigm Shift, but Garcia counters into a cloverleaf. Mox counters with a bulldog choke and Garcia taps out.

After the match, Mix is jumped by 2.0. Eddie Kingston tries to make the save, but gets beaten down. Sting and Darby Allin hit the ring, making the save. 2.0 is stacked up in the corner. Sting hits a Scorpion Death Drop and Allin follows with a Coffin drop.

CM Punk returned and delivered an incredible promo in front of a white hot crowd. It was awesome. What else do I need to say. The tag team tournament match was good, too.